You are here: Home › Blog › Why Love Lemurs?
By Lucía Rodríguez on December 12, 2016
This week’s guest blogger is Jade Price, a primate keeper at Combe Martin Wildlife Park in North Devon, England. She has the privilege of spending her working life with three amazing species of lemurs, which is just as well because she describes herself as “totally lemur crazy!” This is the third in a series of blogs that will document the many aspects of Jade’s experience working with lemurs in managed care, and the importance of zoos to lemur conservation.

For those of us who are lucky enough to spend our working lives around these animals, their individual personalities truly touch our souls. In this post I will be looking at why lemurs mean the world to me and what they mean to the world. 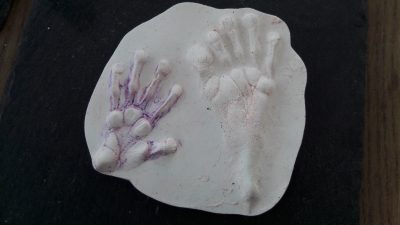 Let’s face it, lemurs have a lot going for them; firstly they are the most diverse species of primate in the world, ranging from tiny nocturnal mouse lemurs to large haunting Indri, and the Aye Aye simply speaks for itself! Secondly they are incredibly special, being endemic to just one island on the whole planet. Unfortunately they are also one of the most critically endangered species in existence. But they are also incredibly intelligent and endearing animals, making them great ambassador species in education and conservation and this is why they are my favourite animals.

For the Love of Lemurs

In my previous blog posts I introduced you to the individuals within the three groups of lemurs I care for at our wildlife park in North Devon. But what exactly do they mean to me personally, as a zookeeper?

Ask anyone I know, and possibly those who don’t know me that well, what animal I obsess over and the answer will be lemurs. I can’t think of a better way to spend my time than being up close and personal with these fuzzy little characters.

Watching them progress through training, trusting you as their keeper, seeing them flourish within their own social groups, are all things that make the long hours and hard work in all weathers worth it. Lemurs really have minds of their own; if they want to ignore you they will. But if they want to interact with you they’ll take any opportunity – especially if you are really busy up a ladder in their enclosure, or have your hands full trying to tie up enrichment feeders.

A wet lemur to the face on rainy days may sound unpleasant but secretly we’re smiling, beneath all that the mud… and sometimes faeces!

But their muddy prints on the back of our uniforms are metaphors for the prints they leave on our hearts. Some of those prints are outwardly permanent; I have a tattoo of Mabel – our dominant red ruff’s – footprint on my ankle and on my left wrist I have our ringtail Popeye’s handprint. Your animals stay with you forever, be it outwardly or inwardly celebrated. Any keeper of any species will tell you so. 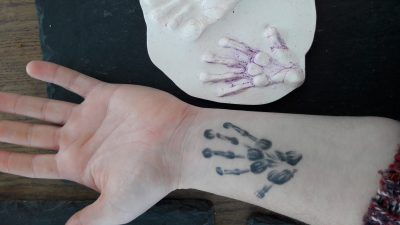 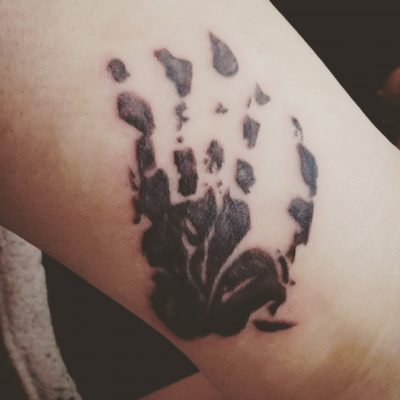 In previous keeping jobs I have been blessed enough to witness lemur families growing in numbers, watching new arrivals fit in from other zoos and being there as infants grew up to start their own families. But the world of keeping can also be tough.

The Good, the Bad and the Ugly of Zookeeping

Zookeeping jobs aren’t just cuddling your animals, doing fun stuff like training or even sitting there and observing them for hours on end. Some of those things we rarely get to indulge in during the hectic regime of daily animal husbandry. They also aren’t just about the happy go lucky stuff. There are some dark times that, as a keeper, you have to accept come with the job.

While you may watch births, you may also witness deaths. Sometimes you are treated to new arrivals from other zoos, and sometimes you say goodbye to animals that have been in your care as they move on to another collection. Whilst the latter is sad you are proud to know that the individual will relish the company in their new home, start a family of their own, and you can visit them whenever you want. The former situation is a lot harder to deal with but is the truth of the job. 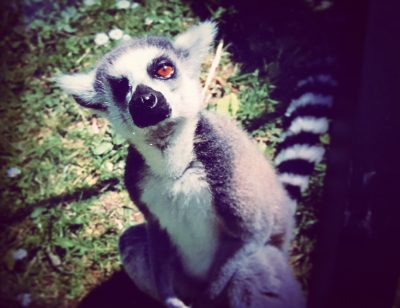 As you may remember our ringtail troop at the park consisted of female Mae, and males Spike and Popeye. Everyone says you can’t have favourites, but every keeper has a secret soft spot for one or two individuals in their care. Popeye was by far my most loved lemur that I have ever worked with. With his missing eye, his tiny frame yet hugely inquisitive attitude he would naturally stand out to anyone who looked at the group. But his gentle nature, immense intelligence and willingness to learn, paired with his cheeky behaviour and inquisitiveness captured my heart as a keeper.

As the star of my weight training routine, Popeye would always be the first to greet me and was always ready to get stuck into any enrichment or clicker training. I looked forward to seeing that little black and white face every day. The more you work with them, the more you get accepted into the group. That makes you feel special. It was for that reason that I found the events towards the end of the summer particularly difficult. 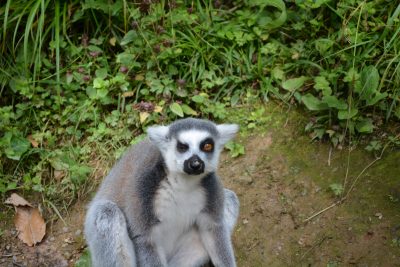 A normally active, happy and bouncy lemur, Popeye was pretty easy to read. So it wasn’t hard to tell that one morning when I entered the enclosure that all was not quite right. He didn’t come out of his house to greet me like normal, and had lost interest in food. His weight began to decline and he kept away from the other two ringtails, choosing to be alone. Concerned, he was taken to the vets but there were no obvious problems with him physically. Despite being obviously off colour Popeye still wanted to train, and even though he didn’t want any of his peanut rewards for doing his cues, he still took clear pleasure in taking part in the routine with me.

Over the next week he steadily declined and tests were run to try and find out what was happening to him. Unfortunately before the tests could come back, on the first of September, we lost him over night. I grieved for weeks and found it difficult to go into the enclosure without becoming upset. Little things reminded me of him every day.

But as a keeper you have a responsibility to care for all the animals on your section and so I put on a brave face. We found out that we lost him to an environmental parasite carried by cats, foxes etc of which shows no symptoms. Luckily none of our other lemurs or primates contracted the parasite, but you can’t help but blame yourself for losing that animal. 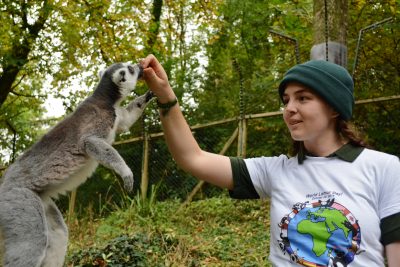 With reportedly less than 2000 ringtails now left in the wild (Lemur Love in-situ research) it was not only a blow to me personally, or the other keepers, or the park, but a blow to the numbers of their wild Madagascan counterparts as a breeding male. I knew I had to concentrate my efforts on Mae and Spike, who still held the potential of being a breeding pair.

Thinking about the bigger picture of zoos led me along the path of conservation and education. Zoos are critically important to the future survival of thousands of species, maintaining captive populations so that if the worst happens, and a species becomes extinct in the wild, we have a breeding pool to introduce back when it is safe to do so.

We have our captive breeding programmes at the park but I felt we could do more. It was then that I discovered the charity Lemur Love, run by a handful of incredibly inspiring girls in the USA who dedicate their time and money to assist in the preservation of lemurs on Madagascar. 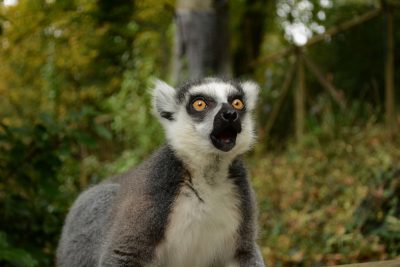 Combating everything from deforestation and bushmeat, to preventing the illegal pet and photo prop trade, educating children and helping farmers be more sustainable in their methods, I knew this was the charity to support. Raising funds for them for one year, all the money we give to Lemur Love will go directly towards helping the girls complete in-situ research, assist the people of Madagascar to live in tune with the forest and raise awareness for the world that if we don’t help make a difference, lemurs could be extinct in the wild in less that ten years!

If you would like to find out more about the outstanding work the girls do, please visit www.lemurlove.org where you can also make online donations to support them in their monumental task. I hope to one day go out and join them in their conservation work in Madagascar. 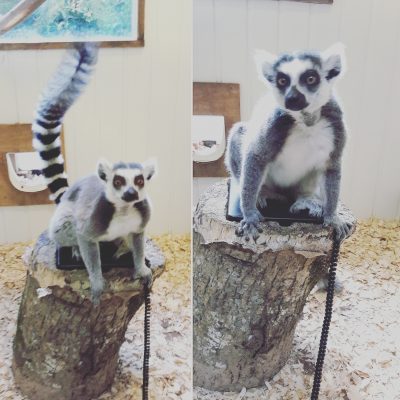 Back at home, I am pleased to say that Mae and Spike are doing very well. It is now breeding season and Spike has been busy scent marking everything in his territory to impress Mae.

Both lemurs are excelling in their weight training and I am monitoring Mae closely for any signs of gradual weight gain to suggest a possible pregnancy. Fingers crossed for her and us! And if we do have the pitter patter of ringtail babies next year then I hope to name them in memory of Popeye. So watch this space.

Goodbyes, greetings and a secret from Howletts
Volunteering at Sainte Luce Reserve