How Climate Change is Impacting Madagascar

Madagascar is one of the top five countries most affected by human-induced climate change. Learn about climate change and how it impacts Madagascar and its lemurs below.

What is the Greenhouse Effect?

There is no denying the fact that human activity has a huge impact on the environment. One of these impacts is the intensification of a natural process called the Greenhouse Effect. The Earth’s atmosphere acts as a sort of natural greenhouse. Certain gases in the atmosphere known as greenhouse gases let sunlight through, but trap heat. When this occurs naturally, global temperatures are kept in a range that supports a plethora of life, which is great!

Humans create an excess of greenhouse gas which causes too much heat to be kept inside Earth’s atmosphere. This excess greenhouse gas is causing major changes to the natural rhythms of the climate that Earth’s living things depend on. We can see the results of these changes when we witness melting ice in the Arctic, rising sea levels across the world, and local extreme weather events like intense droughts and hurricanes.

How does climate change affect Madagascar?

Over the last several decades in Madagascar, Malagasy people have witnessed their weather changing drastically. These changes impact the daily lives of both human and animal communities across the island. 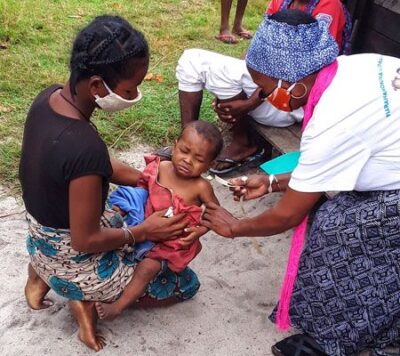 Impact on People
For a country with already poor agricultural conditions, dry soil is devastating for communities. Due to these droughts, many people in southern Madagascar are struggling to survive with very little water and food to nourish them.
Climate Change Leads to Famine in Southern Madagascar

Impact on Wildlife
Understandably, the lack of food in the area causes an increase in hunting of lemurs. And, these dry forests are also pushing lemurs to their limits, creating harsh conditions that make survival difficult. Studies show a direct link between climate change and the reproductive success of several lemur species.

Human Migration due to Climate Change

To escape the drought and food shortages in the south, many Malagasy people are migrating north. This increase in human populations means that more food is needed in new areas. As new families clear land for agriculture, this often results in reduced and damaged lemur habitat in northern and eastern forests. Learn about the impact of immigration on Ranomafana National Park.

Northern Madagascar is feeling the opposite, but still devastating, effects of climate change. Rainfall has increased in this part of the country, causing annual typhoons that destroy roads and infrastructure. This makes it very hard to reach much of northeast Madagascar from December through March. Because of this, it’s difficult to send supplies to these regions and to monitor forests and lemur populations for several months each year. And, sites for tourism and field work are often damaged in yearly typhoons. So, the cost of regular upkeep of these sites is high.