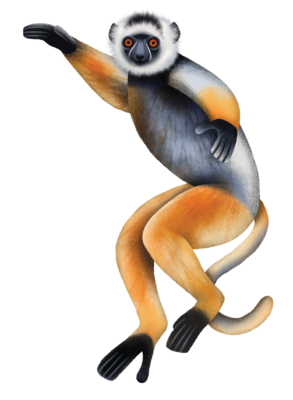 The Diademed sifaka is the largest sifaka species. Due its bright distinctive coloring, it isn’t confused with any other lemur species!

These lemurs are active during the day and found mostly living within the trees. Their diet changes depending on the season, but is mainly made up of ripe fruits, seeds, flowers and young leaves. The Diademed sifaka lives in groups of 2-8 individuals. Females are dominant, meaning that they have the power in the group.

The Diademed sifaka is listed as Critically Endangered on the IUCN Red List, with the number of individuals decreasing.  Where the species is found numbers are very low and groups are found far away from others.

The Diademed sifaka lives in the rainforests of eastern Madagascar. It is thought to be the most widely spread sifaka species despite their numbers being low!

The main threats these sifaka face is habitat loss through slash and burn agriculture and timber (wood) extraction. Groups of sifakas within the Tsinjoarivo region have also seen a decrease in numbers due to illegal rum production. Some individuals are also kept as pets in Madagascar, which reduces populations because these animals are not breeding in the wild.

LCN Members Working to Save the Diademed Sifaka

Research the Diademed Sifaka in the Scientific Literature