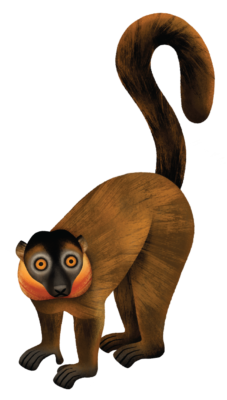 Collared Brown lemurs are a medium sized lemur found only in forests, active both during the day and the night, and spend most of their time on or close to the ground. Their diet is made up of mainly fruit but sometimes they eat flowers, young leaves and insects. A group can be made up of 2-17 individuals, however sometimes groups found in intact rainforest can be as large as 22 individuals!

The Collared Brown Lemur is listed as Endangered on the IUCN Red List. The number of individuals is decreasing and groups of the species are found far away from other groups.

The Collared Brown Lemur lives in the southeast of Madagascar in moist tropical lowland and montane forests. Small populations have also been seen in the Saint-Luce conservation zone and private reserve.

The main threat this species faces is habitat fragmentation due to loss of forest for charcoal production and slash and burn agriculture. Individuals are also hunted for food and trapped for local pet trade. Researchers have also found mining for Ilmenite is a threat to the Collared brown lemur.

Members that work with the Collared Brown Lemur include: GERP