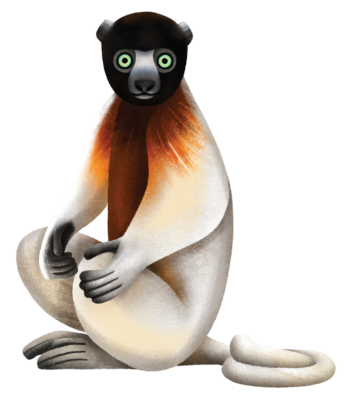 The Crowned sifaka is a medium sized lemur that is active during the day and lives most of its life in the trees. They live in groups of 2-8 individuals and have been seen to be very aggressive when defending their territory! Their diet is made up of mostly leaves, buds and unripe fruit.

The Crowned sifaka is listed as Critically Endangered on the IUCN Red List with numbers of individuals decreasing rapidly and groups of the species found far away from other groups.

This lemur species lives in northwestern Madagascar in tropical dry lowland forest and sometimes among coastal mangroves. Because they share this area with Von der Decken’s Sifakas, some scientists believe that these species may mate to form hybrids!

Their main threat is habitat loss, mainly through slash and burn agriculture that provides land for livestock and the cutting of trees for charcoal production. Some crowned sifakas have also been captured live for the illegal pet trade.

Members that work with the Crowned sifaka include: GERP; IMPACT Madagascar

Where to See These Lemurs in Madagascar