Negative impacts from invasive species can be even more drastic in ecosystems with a high number of endemic species like Madagascar.

The invasive species found in Madagascar were introduced by humans, and they may surprise you. 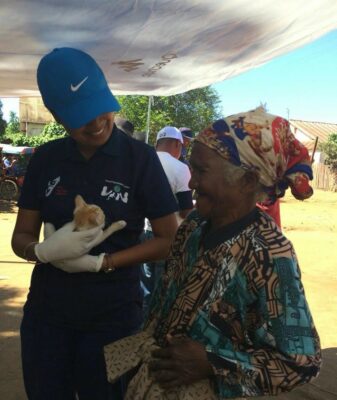 Rats, stray dogs, and stray cats in Madagascar are all considered invasive species in Madagascar. They often live in or enter parks and other conservation areas. Besides carrying potentially harmful diseases, these invasive species can also prey on the natural wildlife of an area, including lemurs. So, while we may think of the fossa as the lemur’s most likely predator, often stray dogs and cats can be a bigger threat to wild lemur populations.

About the Mad Dog Initiative:  addressing the stray dog and cat problem in Madagascar

Additionally, sometimes exotic animal species enter Madagascar accidentally in large cargo ships at shipping ports like Toamasina on the east coast. If the species are not contained immediately, they can enter the ecosystem and put the balance of wildlife in danger. Learn about an invasive toxic toad that entered Madagascar through a shipping port.

It’s not just animals that can be invasive species. Reforestation with non-native plant species like pine and eucalyptus can encroach on primary and secondary forests. This often degrades habitat and can even cause habitat fragmentation. Fragmentation is dangerous because it isolates lemur populations so they can’t travel between groups. This can result in lower genetic diversity and lemur populations that are less healthy.