Home » How do Lemur Diets affect their Cognition?

You are here: Home › Blog › How do Lemur Diets affect their Cognition?
By Katie Hallsten on July 31, 2020

What impact does diet have on lemur cognition? Why do some lemur species have more robust spatial memory than others?

Although relatively little is known about cognition or memory capabilities in lemurs, there is growing evidence that the answer to the above question may actually have something to do with differences in diet between lemur species. In this blog post, we will explore this research and discuss what it means for lemurs’ cognitive ability.

Spatial Memory supports retrieval of the locations of objects and places in the environment (1).

These tasks were specifically designed to test spatial memory recall after a long delay, and the learning mechanisms for lemurs’ ability to recall more than one location in a complex environment. In the first task, researchers challenged the lemurs to recall the previously learned location of a hidden food reward after a delay of one week. 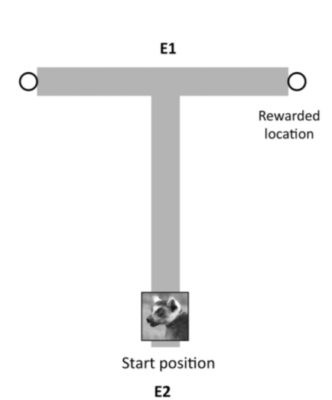 In the second task, the researchers cleverly switched the starting location of the lemur subjects to the opposite side of the testing platform to see whether or not the lemurs would adjust their path in order to correctly navigate to the location of the food reward. This procedure was borrowed from a 1996 experiment by Packard and colleagues (3). 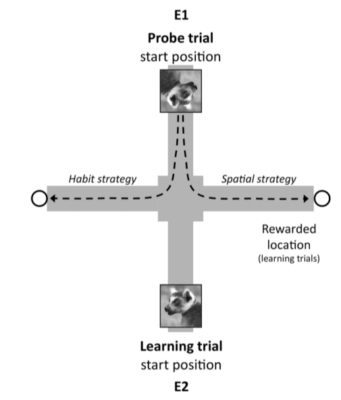 This 180° switch allowed the researchers to determine what kind of strategy the lemurs were using to navigate to the food. They wanted to know if lemurs remember locations in reference to themselves (egocentric) or to other objects (allocentric).

So, if the lemur subjects turned in the same direction as they did in the previous task (leading to the wrong location), it could be inferred that they employ an egocentric navigational strategy. If the lemurs returned to the correct location by turning in the opposite direction from the previous task, it could be inferred that they use an allocentric strategy.

Do the diets of ruffed lemurs impact their spatial memory?

Ruffed lemurs outperformed the other three species in each of the three tasks, and often demonstrated important spatial strategies for navigation while the other species often used more habitual strategies.

So, why is this the case? What is so special about the diet of the ruffed lemur compared to other lemur species? One word: fruit. Ruffed lemurs are known to be frugivorous, meaning they tend to prefer a fruit-based diet. For red ruffed lemurs specifically, fruit can make up over 90% of their diet!

Many other lemur species have mixed diets, where fruit makes up anywhere from 30% to 60% of their food intake (4). Some species (sifakas for example) are primarily folivorous, which means they tend to have a diet that consists of leaves and foliage (5). 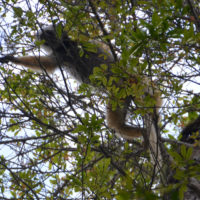 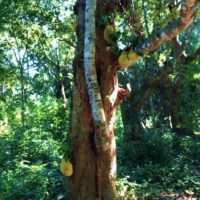 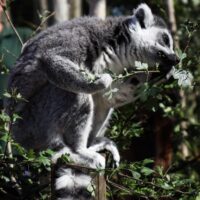 Potential cognitive benefits of a frugivorous diet for lemurs

For lemurs, what are the cognitive benefits to having a frugivorous diet rather than a folivorous one? It may have something to do with brain size. Frugivorous primates tend to have comparatively larger brains than their folivorous cousins (6).

This finding contributes to a growing body of evidence supporting the hypothesis that foraging complexity may have been a factor of the evolutionary selection for larger brain size in lemurs, as foraging for fruit tends to be more complex than foraging for leaves (4).

In primates, a large brain size to body size ratio has been associated with a variety of advantageous attributes such as prolonged life span (8), deception (9), and cultural/social intelligence (10).

There are probably also other factors that have led to differences in cognition between lemur species, including variations between species’ social complexity and other facets of ecology (11). Although, it does seem that diet plays a vital role, especially for spatial memory and navigational strategies.

To be clear, this does not mean that substituting the salad in your diet with fruit will make your brain larger!

In review, a lemur species’ diet may have some impact on certain cognitive abilities, especially spatial memory. Thanks to recent research findings, there is evidence that lemur species with a more frugivorous diet (such as ruffed lemurs) have a more robust spatial memory than lemur species with a folivorous diet. This makes logical sense, as the process for foraging for fruit is more complicated than the process for foraging for leaves.

Additionally, frugivorous diets have been associated with larger brain size in primates. A large brain size to body size ratio is also associated with the presence of other evolutionarily beneficial cognitive and physiological attributes. However, other ecological factors may also be at play.

Katie Hallsten is a primate cognition researcher and MSc student at the University of St. Andrews where she studies planning behavior and physical cognition in chimpanzees, orangutans, and macaque monkeys. She is dedicated to conserving the world’s most endangered primates and hopes to inspire others to do the same.