You are here: Home › Blog › LCN Member of the Month: SEED Madagascar
By Lucía Rodríguez on September 1, 2017
The Lemur Conservation Network member of the month showcases our members’ work, and shares how we can help them in their battle for lemur conservation. The month of September is dedicated to SEED Madagascar. In this blog post, we interviewed SEED staff who tell us all about their important work and how we can support them.

Tell us a little bit about the history of SEED Madagascar. 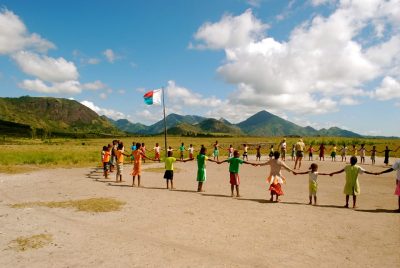 SEED Madagascar is an award-winning British charity founded in 2000. For more than 15 years, our Conservation Programme research team, together with volunteers from around the world, have been working in the coastal community of Sainte Luce in southeast Madagascar.

Situated in the heart of a newly designated conservation zone, our permanent campsite is closely surrounded by five fragments of littoral forest, offering us the unique opportunity to research an irreplaceable and increasingly threatened ecosystem and the lemurs it supports.

Where is SEED Madagascar located, and what else can you tell us about the NGO?

We manage a wide range of sustainable development and conservation projects in the Anosy region of southeast Madagascar, all of which are built around the most pressing needs of disadvantaged communities. Our teams work together across four disciplines – community health, sustainable livelihoods, conservation and education – to achieve our vision: a resilient network of thriving communities, organisations and ecosystems across Madagascar.

Madagascar’s littoral (coastal) forests are home to an enormous variety of endemic plants and animals. The southern littoral forest in Sainte Luce is one of only three significant areas of this type remaining in Madagascar, having been reduced by over 90%! 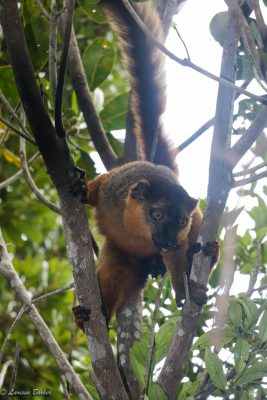 As the forest has both high biodiversity and a local population who relies on it heavily, our Conservation Programme combines scientific research with community conservation work to ensure it’s sustainable for future generations. We hope that our holistic approach that integrates practical conservation, education and community engagement can promote and conserve the area’s outstanding biodiversity!

We work with all four species that currently inhabit Sainte Luce: a potentially new mouse lemur species Microcebus sp.; the fat-tailed dwarf lemur Cheirogaleus medius; southern woolly lemur Avahi meridionalis; and red-collared brown lemur Eulemur collaris. All of these face threats from local pressure on the forest, as well as the looming threat of mining.

Some fun facts about the lemurs in Sainte Luce 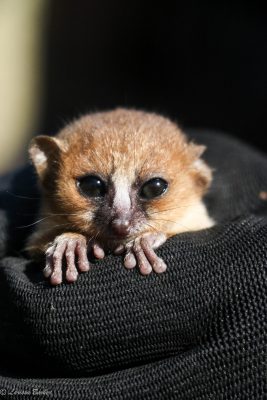 The endangered red-collared brown lemur is the only lemur regularly spotted during the day, being active both in the day and the night and feeding on fruit, leaves, flowers and the occasional invertebrate. Two troops are often spotted foraging in the trees around our conservation campsite, visiting from nearby forest fragment S9. The brown lemurs live together in social groups and a trio has recently been spotted in fragment S8 for the first time in 8 years, providing evidence of movement between forest fragments!

The novel mouse lemur, Microcebus sp. (previously considered Microcebus rufus) is the smallest lemur found in Sainte Luce, weighing in at around 50g! This potentially novel species is the subject of Project Microcebus and PhD student Sam Roberts’ studies. We are currently collecting data to support an IUCN Red List Status classification and anticipate that it will be classified as endangered or critically endangered due to its limited range size and current stress on its habitat. Sainte Luce’s mouse lemurs can be found across many of the forest fragments and feed on fruit, flowers and invertebrates. 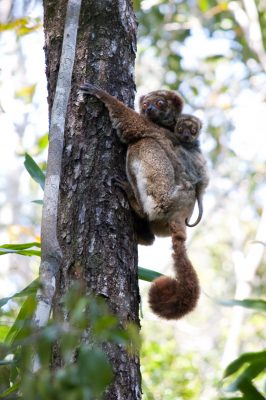 The southern woolly lemur is a medium-sized nocturnal lemur. Endangered and relatively little studied, it requires further research into its natural history. The species is generally found in small family groups in most of the Sainte Luce fragments. A family live in and around the SEED conservation camp, and their boiinnnggg-eeek calls regularly disturb our volunteers while they’re trying to sleep!

The fat-tailed dwarf lemur is small and nocturnal, well known for its ability to go into a hibernation-like torpor for six months or more during the cool, dry winter season when food and water are scarce. These lemurs bulk up during the summer seasons, storing much of the fat obtained from sugary fruit in their tails – hence the name! Although sightings are rare at this cooler time of year, our volunteers are just beginning to spot them again on night transects in the forest. 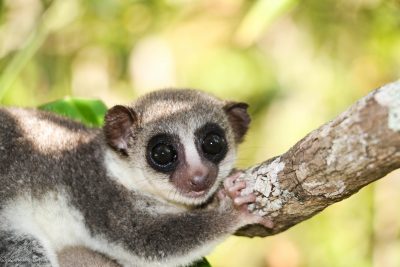 Our research currently focuses on biodiversity, so we collect data about the species present, their distribution, density, behaviour and habitats. We use this data to better manage the forests, support the local community and protect the species concerned.

Throughout this year, we have continued to carry out lemur population studies – one of our longest running projects! Ongoing, year-round data collection is crucial to accurately monitor population size, density and spatial distribution of the lemur species inhabiting the forest fragments of Sainte Luce.

By investigating the suitability of the various forest habitats, we’re aiming to assess how plausible it would be to reintroduce species to fragments where they’ve been previously wiped out. This could play an important long-term role to mitigate the impacts of logging and planned mining in the area, so this research is vital to the future recovery of the forest. 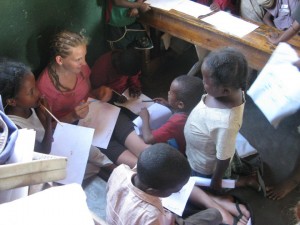 We also collaborate with Oxford Brookes University and are currently working with two PhD students in Sainte Luce. Sam Roberts is studying the effects of forest fragmentation on genetic diversity, seeking to reveal the true identity of mouse lemurs in Sainte Luce. Sam has been catching mouse lemurs in Sherman traps, collecting skin and hair samples for genetic analysis and taking measurements and photographs – all following a strict ethical code of practice.

It is anticipated that analysis will reveal the discovery of a new species of mouse lemur that may be endemic to the littoral forest of Sainte Luce!

Elena Racevska is studying the behavior of the red-collared brown lemurs in S9, and has fitted tracking collars to members of two troops. She’s also collecting data on feeding behaviour, seed dispersal and community use of the forest to further understand the interactions between lemurs, the forest ecosystem and the local people.

Our enthusiastic volunteers also run bi-weekly environmental education classes for local children, and help out with English teaching in the community. 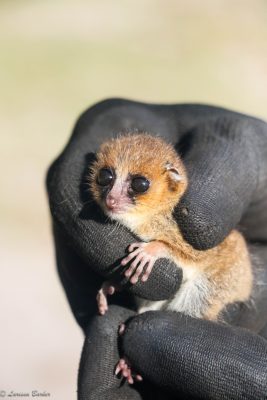 In 2015, our researchers identified a new species of mouse lemur (currently undergoing in-depth genetic verification) in the unique and threatened Sainte Luce littoral forest – an exciting opportunity for a new flagship species in the area!

We have successfully implemented a number of in-situ conservation projects, including research and conservation of the critically endangered Phelsuma antanosy day gecko; and the creation of a community-agreed no logging zone surrounding roosts of the vulnerable Pteropus rufus megabat, which is supported by community patrols funded by ecotourism income from a newly-built bat hide.

What are some goals and expectations you have for the future?

Our current aims are to form habitat corridors between forest fragments and adjacent remnants with Project Ala, as well as expanding the forest overall to reduce genetic bottlenecking and pressures on the local lemur populations.

This work will benefit much more than just the lemurs as it’ll provide more habitats for all the flora and fauna found in Sainte Luce. 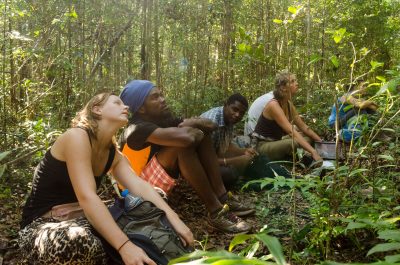 Do you have volunteer opportunities at SEED Madagascar?

Our volunteers don’t just come for a holiday – they gain real, practical experience in conservation research and the running of a small NGO in one of the most overlooked areas of Madagascar.

Not only is the experience vital for anyone looking for a career in the field, but the research they contribute to makes a huge difference to the conservation of these threatened forests. It’s not just the lemurs who benefit, but the snakes, lizards, birds, lobsters, plants and people too! 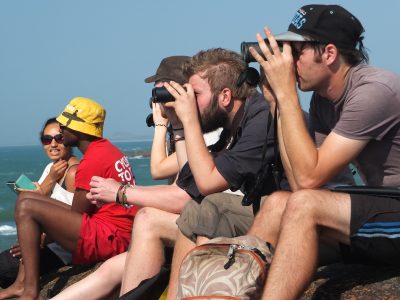 By volunteering with our Conservation Programme, you make a donation that directly helps conservation and development. Donations help us meet our crucial goals, whether that’s building forest corridors, protecting lemur habitats, or working with the community to promote sustainable forest use!

We’re an incredibly efficient charity, with 92% of all donations going directly to support our projects, and we constantly work to keep our admin costs as low as possible.

With a diverse range of projects that support both conservation and development, we can improve incomes and overall quality of health. A healthier community means a healthier ecosystem, which will help to protect the lemurs for generations to come!