Home » On the Ground with Raymond Vagell

You are here: Home › Blog › On the Ground with Raymond Vagell
By Kim Reuter on October 5, 2015 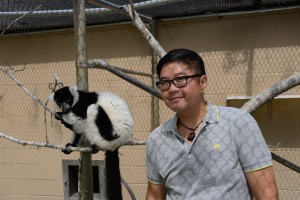 Raymond with Kizzy the lemur at the Duke Lemur Center.

Raymond Vagell is is a Masters student at Hunter College of The City University of New York, where he majors in Animal Behavior and Conservation. His master’s thesis project, which is being conducted at the Duke Lemur Center in North Carolina, is on color vision in ruffed lemurs (Varecia spp.) under the guidance of Dr. Andrea Baden. For this research, he trains and runs behavioral trails with ruffed lemurs. In addition, he plans to extract genomic DNA from lemurs at the Duke Lemur Center for genetic analysis at the Primate Molecular Ecology Lab (PMEL) at Hunter College.

Raymond received his Bachelor’s degree in Anthropology from Queens College of The City University of New York, where he compared grooming patterns in hamadryas baboons (Papio hamadryas) and geladas (Theropithecus gelada) for his Senior Honors Thesis. More information about Raymond’s research can be found on his blog, The Prancing Papio, and he can be contacted via email at: Raymond.Vagell@gmail.com

When did you first get interested in working with lemurs and what motivated you to undertake this work? 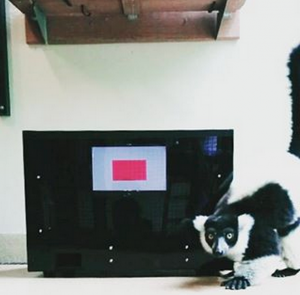 Raymond works with the ruffed lemurs indoors because too much natural light will cause glare on the surface of the televisions and the lemurs wouldn’t be able to see the screen.

I didn’t start working with lemurs until the beginning of last year (2014) when I was approached about an interesting study on color vision with the ruffed lemurs. Color vision is very important in primates; presumably, the ability to perceive red is advantageous for finding ripe fruits in ruffed lemurs as they are frugivores (fruit-eating animals).

In fact, most color blind humans are also males because in humans, the ability to perceive red is also a sex linked gene.  My work here in Duke Lemur Center is to investigate how ruffed lemurs perceive their world. Specifically, who can perceive red and who can’t. I was recently featured on Duke Lemur Center’s Instagram page for their “Meet the Scientist” event. Check out their page for more pictures about my research and my lemurs!

So how exactly do you test color vision in ruffed lemurs? 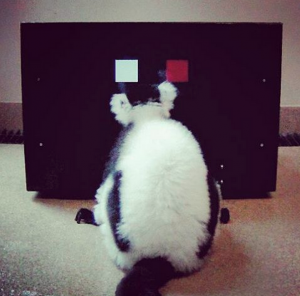 Broadly speaking, I test whether lemurs can perceive colors by training them to target a stimulus and then have them participate in a two choice discrimination task.

To do this, I have developed a subject-mediated automatic remote testing apparatus, aptly named SMARTA for color vision discrimination tasks. It is a machine with a touchscreen tablet that I use for discrimination tasks. When I train the lemurs to use SMARTA, I operate the machine manually but when they are doing the discrimination tasks, SMARTA runs automatically to decrease biases and reliability when collecting data. Built within SMARTA is a food delivery system that dispense food rewards.

What is a typical day like for you when you’re working with lemurs? 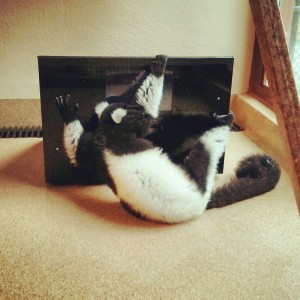 One of the black-and-white lemurs being trained to target a red square on SMARTA. Most of the time, the ruffed lemurs like to sit on their legs with their body erect when working on the apparatus (similar to a human watching TV, sitting upright on the floor). Sometimes the lemurs would put one of their hands on top of SMARTA. Sometimes, they like to hang onto the TV like this.

I usually arrive at the DLC early in the morning, around 8:30 AM. There are two reasons to this. First, the lemurs are positively reinforced with a food reward so you would want to train them before they are fed. However, you don’t want to withhold food from them too long so I generally start early and end my research around 11 AM at the latest. Just to be clear, this doesn’t mean that all of the lemurs in my study get fed after 11 AM. It’s only the last group I am working with. Secondly, I start early in the morning because I want to beat the excruciating North Carolina summer heat and humidity.

I am currently working with 3 groups, ranging from 2 to 4 lemurs. Most of these lemurs are being trained right now to station properly and to touch the stimulus we present to them except for one “star student” who “connected the dots” after being trained for 2 weeks. Her name is Halley. In comparison, some of these lemurs have been trained for over 3 months and have yet to master what we wanted them to do. So, besides training these lemurs, I am also running discrimination task with Halley.

What are the hardest parts about doing research with lemurs? 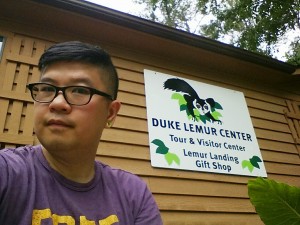 The hardest part about doing research with lemurs, at least for me, is finding a large enough sample size. Lemurs are threatened or endangered, so their numbers are small to begin with. Doing cognitive tasks in a captive setting would require finding a place with large enough lemur population to work with; most zoos have a small group. With my current project, I needed a lot of females in my sample size. I am so glad I found the Duke Lemur Center! Other than that, I don’t think there is anything hard about doing research with lemurs. As a matter of fact, they are a joy to work with!

What is the funniest or most memorable thing that has happened to you while working with lemurs? 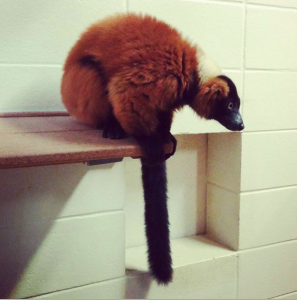 My lemurs absolutely love raisins and dried cranberries, which is why I use them as food rewards. Sometimes when I am in their enclosure, they reach out with their hands as if asking for raisins or dried cranberries (imagine a chimpanzee begging gesture!). But I guess it is memorable because with their hands outreached and staring at you, it feels like they are gazing into your soul. It’s an amazing experience and I am glad I can be part of it, almost every day.

Some of my lemurs have developed a way to “cheat the system” so to speak. They have learned a few ways to make the food reward dispense with little to no effort.

Some of them would place their hand on one side of the tablet and eventually that hand will hit the right stimulus and a food reward will drop down. Some will put their hands on the middle of the screen hoping that it will hit the correct stimulus. I think it’s funny that they have come up with ingenious ideas to get the food reward without trying to actually having to solve the task. I also have lemurs that use all their hands and feet to interact with SMARTA simultaneously.

These lemurs love SMARTA! By the end of each session, I have to move the lemurs to an adjacent enclosure and get the other lemur to come to the enclosure where I set up SMARTA. The lemurs do not want to leave! It’s like a child that can’t get enough of their video games or TV. Getting them to go to another enclosure requires a lot of positive reinforcement but sometimes they don’t even want food reward. They would rather stare at the SMARTA television screen!

I hope to better understand lemur color vision and perception. I’d also like to discover more about the evolution of color vision in prosimians.

A Look Back at the 2014 World Lemur Festival
Catching up with Ash Dykes in Fort Dauphin, Madagascar