You are here: Home › Blog › Interview with Christoph Schwitzer: Part 1
By Corey Romberg on March 29, 2016
Lemur Conservation Network volunteer Jen Tinsman recently had a chance to interview one of the leading lemur conservationists in the world, Dr. Christoph Schwitzer. Dr. Schwitzer currently serves as the Director of Conservation at the Bristol Zoological Society. He is also the Vice Chair for Madagascar, and Red List Authority Coordinator, of the IUCN Primate Specialist Group, Vice President for Captive Care and Breeding of the International Primatological Society, and Executive Secretary of the Association Européenne pour l’Etude et la Conservation des Lémuriens, a consortium of European zoos dedicated to lemur conservation. In addition, Dr. Schwitzer is one of the esteemed project advisors for the Lemur Conservation Network. This week’s blog is part one of two of this interview.

How did you get started working with lemurs in Madagascar?

I was in the right room at the right time. I had just finished my PhD on lemurs in zoos. My PhD supervisor happened to be the vice president of an association that was conducting lemur research and conservation for lemurs in Madagascar. Cologne Zoo, where I did my PhD, was one of the founding members of the zoo consortium. Because its director was my PhD supervisor, I was taking the minutes of the annual meeting. 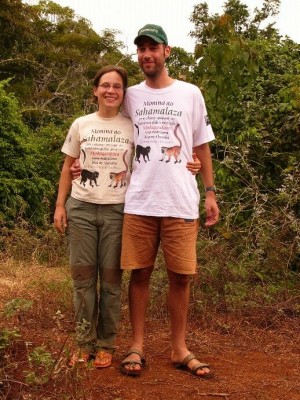 In 2003, when I had literally just finished my PhD, they were looking for somebody to go to Madagascar to build a field station in the first place and run a research program there. I said ‘Maybe I could do it,’ and everybody grumbled. It took them a while, but then eventually they said ‘Okay then, you do it.’

And my (future) wife came with me! She was originally going to do a PhD on domestic chickens at Munich University. When I said that I had been offered a job in Madagascar, she said ‘Oh, well, I’ll come and do a PhD on lemurs instead.’ So that’s basically the story of how I ended up going to Madagascar.

What unique conservation opportunities does working at a zoo provide?

When zoos carry out or fund conservation, we can stay for a long time because we’re not bound by three-year grant cycles and all that kind of brouhaha. Our conservation funds mostly come from our zoo visitors, so we have more flexibility in how long we stay in a country and how much money we give to certain projects. That is really helpful when it comes to Madagascar, as conservation in Madagascar isn’t really for the short term. As soon as you leave, problems just reappear – it’s very difficult when you are bound by short term funding. In Sahamalaza, where we mainly work, the fact that we have been there now for more than a decade is the most important factor in the project functioning. That’s the same in many other projects: when you think of Ranomafana and Pat Wright having been there since the late 1980’s, or Berenty or Kirindy, it just worked because people are committed over the long term. The beauty of zoo funding is that I don’t need to worry about follow-up funding all the time.

The other big thing about zoo-based conservation is that not only can we do field conservation, we also we have a captive audience. At Bristol Zoo, we have a bit more than half a million visitors each year; so we raise awareness among our visitors on conservation in general, and lemur conservation in particular. People come to us because they like having a great day out. They don’t come for conservation necessarily; but while we have them captive for about three or four hours, we try to promote positive behavior change. Every year we do these campaigns and focus on one particular behavior that people can carry out easily to make the world a bit better, hopefully.

What was your most recent conservation campaign at Bristol Zoo?

We recently did two on Forest Stewardship Council (FSC) certified products. The first one was on FSC certified charcoal. We always look for something where people can A.) easily change their consumer behavior, and B.) where the market isn’t totally penetrated yet by the product that we want them to change to. So if you take FSC certified tissues for instance, everybody is using them already. There wouldn’t be any point in us promoting them because they already have a 90% market share; but FSC certified charcoal hasn’t, and of course when you think about charcoal, quite a bit of it does come from countries with primary forest. There’s also a big element in awareness raising because in Madagascar charcoal is certainly a big problem domestically even though they’re not exporting it, but we can talk about it and raise awareness of the issue as well.

We also did a campaign on FSC certified kitchen products. We built a nice kitchen in the middle of the zoo and had people play kitchen games. In our ZOOpermarket game you had to choose FSC certified products over other products, put them in a trolley, and bring them into the kitchen, and stock them again. It’s all a bit of fun, but we’re trying to get our guests to do stuff differently.

The last big thing that zoos can do in addition to field conservation and behavior change is the old paradigm of breeding species in captivity as insurance for populations in the wild, which we still do passionately. We know that it’s expensive, we know that it isn’t going to work in each case, and in many cases these animals won’t go back out to the wild.

Nevertheless for species that are down to a couple of 100 individuals, it’s much better to have some in captivity as insurance rather than risking their extinction. And while we have them here, they can play a huge ambassadorial role for their threatened conspecifics in the wild, and promote positive behavior change.

So these are the three main aspects of zoo based conservation.

What lemur species are your efforts currently focused on? 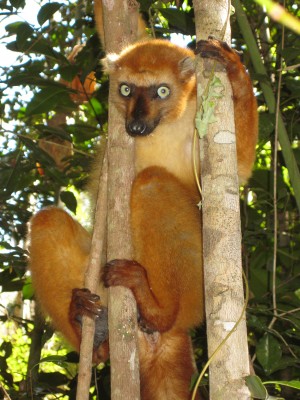 In Madagascar, we are working in the northwest in Sahamalaza. The main focus is on the blue-eyed black lemur, which is the flagship species of the area – of course the most charming one and I always say it’s the only non-human primate with blue eyes, which is a bit of a lie because I know there’s a spider monkey species that has bluish eyes, but they’re a bit ugly!

We also work with the Sahamalaza sportive lemur or Lepilemur, which is one of a plethora of sportive lemur species that were described in the last decade or so. We’ve done a couple PhDs on those guys now, and we have done an M.Sc. thesis on the northern giant mouse lemur Mirza zaza which just happens to occur in our area. It’s the only national park where it occurs.

We’ve recently done one study on the Sambirano mouse lemur, which we didn’t even know existed in Sahamalaza. When I was there, we never found any mouse lemurs. We thought we were the only forest without mouse lemurs in all of Madagascar, and I was quite proud of that! But then a colleague found a mouse lemur in a forest I hadn’t been to on the peninsula, really not very far from where we have our field station. So I thought, ‘Okay, maybe somebody brought it there; that happens sometimes.’ No, she then found a whole population of them, and we’ve done a master’s study on them now to see what they are doing there, how many there are and so on. So these four species we’ve been working with on the peninsula.

What roles do scientific research and training play in conservation?

I would say very big roles: certainly in Madagascar, we’ve seen that long term field stations are one of the best deterrents of illegal activities. Places like Ranomafana, Kirindy, St. Luce, Sahamalaza, Kianjavato, and Montagne des Français, seem to be doing well at that.

And hopefully the local population sees that perhaps leaving the forest standing and leaving the lemurs alive may bring in more money over the long term than chopping it all down.

Do you work with a mix of international and Malagasy researchers and students?

Yes, we’ve got quite an international bunch of students working at our field site. We usually mix up our British students with maybe a French student or a German student who speaks French and certainly Malagasy students. At the moment, we have one Austrian PhD student, one Belgian PhD student, one American PhD student, and one or two British master’s students. And every international student has a Malagasy counterpart student, who works with them and to whose education they contribute. We also have Malagasy master’s students, mostly from Mahajanga University because it’s our local university.

Inside Andasibe: A Film on Deforestation in Madagascar
Interview with Christoph Schwitzer: Part 2