You are here: Home › Blog › Zookeeper’s Notebook: Spotlight on Crowned Lemurs
By Phil Reeks on March 22, 2015 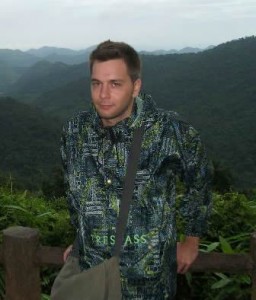 Following on from my article ‘Getting Started as a Volunteer Lemur Keeper’, I feel that crowned lemurs deserve a little limelight. I am very lucky to work with a family of four in Howletts’ walk-through, each with their own character and quirks. 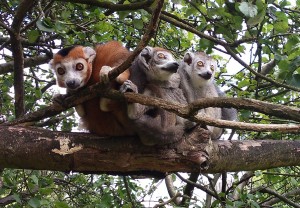 King and Epi with Valana

Being a matriarchal species, the leader of the group is Epi. She is vocal, energetic, assertive and most importantly a loving mother. Like other lemurs, her favourite time of day is mealtime. But, she can often be found wandering the paths or running overhead. She keeps a watchful eye on the skies for predators (an aeroplane can send her darting for cover), and will be the first to test the weather and lead the others outside. The past few months have shown her to have a silly side too – she gives as good as she gets from her playful baby boy, and can even be found bundling with her supposedly mature daughter.

The dad King is ginger to Epi’s grey – crowned lemurs are sexually dichromatic so gender determines colour. King is a lot more laid back. He hangs back and behaves himself at breakfast and dinner, avoids the continuous scuffles around him, and is the most appreciative of a sunny day. He has a favourite perch where he stretches out to soak up as many rays as possible. 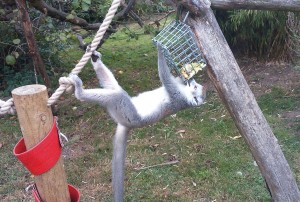 Valana is their firstborn. When I began at Howletts, she was timid and kept her distance from anyone with two legs. Now, she is constantly harassing me for fruit (we do feed them, honest!), and one of her favourite activities is climbing atop a high branch then diving head first into our bamboo patch. She then clambers out and does it again. She is also mischievous and enjoys stalking her ruffed lemur neighbour, pulling his tail or nipping his hind and running away. These are tricks she’s taught her young brother. Interestingly though, she’s the only one who sometimes sits and chills with her red-bellied cousins.

Valana is nearly two years old. Crowned lemurs are mature at twenty months and last year they were upgraded from vulnerable to endangered in the wild. Even more frightening is the recent news that they could lose 99% of their habitat by 2080. That would mean extinction. Therefore, it is likely that she will be moved to another park for breeding, perhaps with the possibility of her own babies going back to Madagascar. I will miss her antics, but zoos should always be working towards conservation goals. She’ll make a great mum. 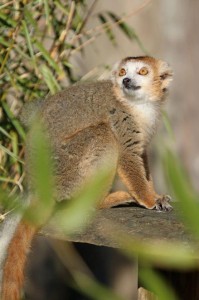 Their second born is Ala, who was born in July last year. Initially the size of a small gerbil, he is now bouncy, confident and somewhat of a nuisance. He will never get the message that his dad doesn’t like fighting; he puts the red-bellies in their place at meal times; and he only sits still to eat or sleep. Ala and Valana spend hours battling each other then gang up together to hound their poor neighbours.

The four are a very closely knit unit — where one goes, they all go. They rarely sleep alone, wrapping their tails around each other no matter how warm the weather. They likewise spend a lot of time grooming each other. This isn’t just to clean but to build and re-enforce relationships.

Back in Madagascar, things are admittedly a little different. Hailing from the far north, the species is most at home in dry lowland and mid-altitude forest, sticking to lower branches to avoid competition with Sanford’s brown lemur. Like brown lemurs, they live largely on fruit (approximately 85% of their diet), although the dry season forces them to try flowers, insects and occasionally eggs. They are comfortable on the ground, but this does not mean they aren’t amazing climbers.

All of these species are medium sized with tails significantly longer than their bodies and are sexually dichromatic. For example despite their name, female black lemurs are in fact yellow. True lemurs are also cathemeral, meaning they can also be active at night.

Groups are usually made up of five or six individuals but can larger, especially in drier habitats. These then split into sub-groups when foraging; the lemurs use their guttural grunts so that contact is not lost. Mating takes place in late May and early June with one or two young born when the wet season begins four months later. The babies cling to mum’s belly before switching to her back. 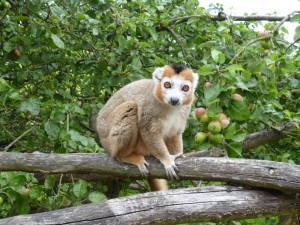 Crowned lemurs depressingly face many of the same troubles as their relatives across the island. The IUCN predicts that they will lose half their population in merely three generations (roughly twenty-four years). The biggest issue is habitat loss, which takes place for a multitude of reasons—some legal and some not.

In addition to habitat loss, crowned lemurs face other threats. They are sometimes targeted as food, and they draw ire because smaller forest areas force them to raid crops. Unfortunately, there is also a demand for them as pets in Madagascar, which threatens the wild population.

Eulemur coranatus is a species in bad decline. Without our help, the animal kingdom will sadly lose some of its royalty.