Home » Putting trees back where they once were: Reforestation at Centre ValBio

You are here: Home › Blog › Putting trees back where they once were: Reforestation at Centre ValBio
By Lynne Venart on November 10, 2015
Sabrina Szeto is a Land Conservation Intern at Centre ValBio, a state-of-the-art research center in Ranomofana National Park in Madagascar. This internship is part of her Master of Environmental Management program at the Yale School of Forestry and Environmental Studies, where she is in the class of 2016. Over the next several weeks, she will be writing several blogs about her experiences and reflections in Madagascar while she is working on mapping, geospatial analysis and land conservation.

Reforestation is a Mainstay of Centre ValBio 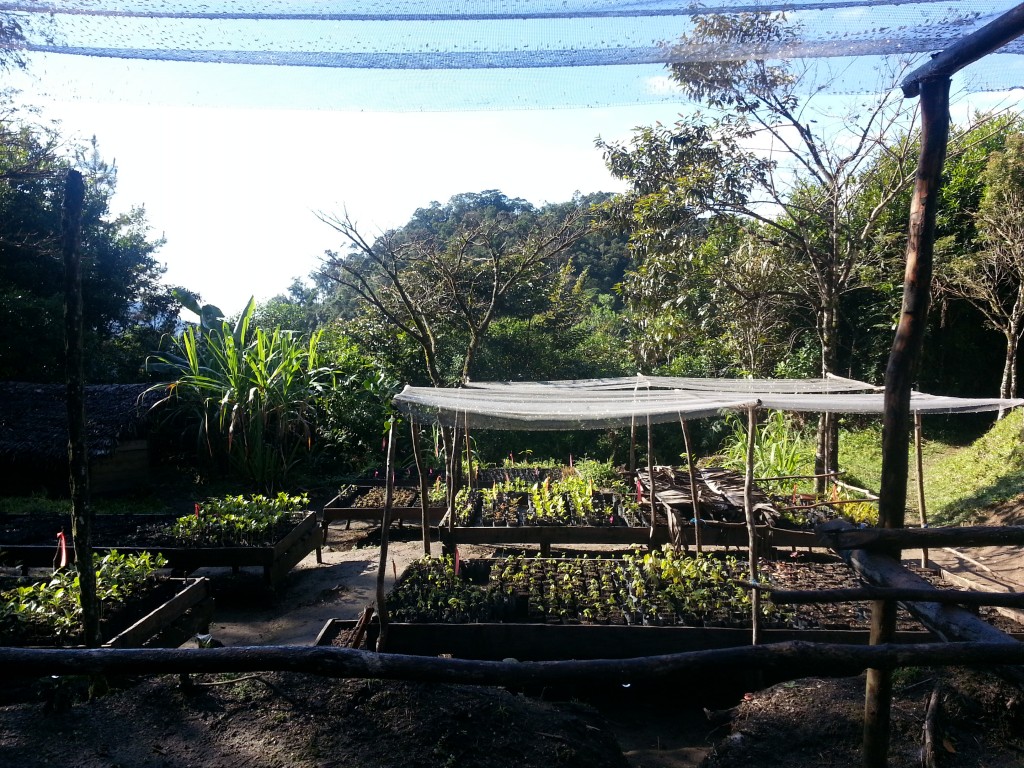 Reforestation at Centre ValBio has been a mainstay of the field station since its founding. Working with landowners in the periphery of the park, Centre ValBio has established reforestation plots on private land as well as a demonstration agroforestry plot which has vanilla vines growing on native trees for support.

Using Trees Native to the Region

The reforestation program only uses trees which are native to the region, the seeds for which are gathered from within Ranomafana National Park and germinated in a tree nursery.

There are 29 tree species being planted at the nursery. These trees include trees which are important sources of food for lemurs such as the Ramy tree (Canarium madagascariensis, for aye-ayes) and Rotramena (Syzygium bernieri, for sifakas). Other trees also are important for traditional medicinal use, while some are sources of timber for buildings. 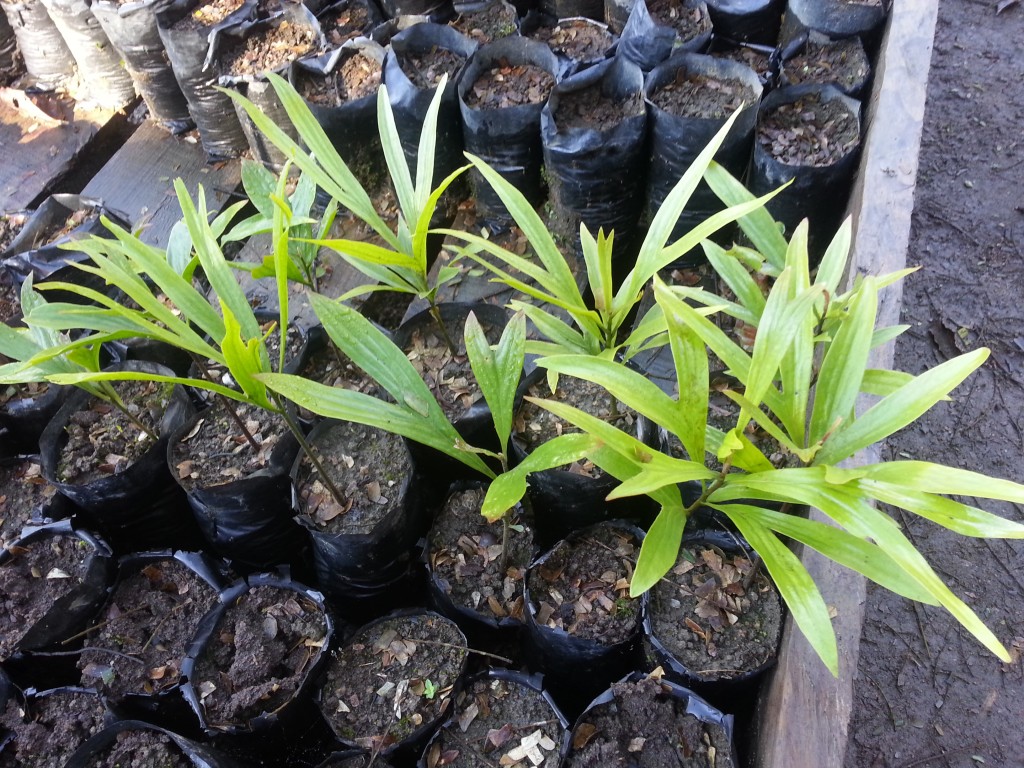 A Tree Nursery Full of Seedlings

At present, the tree nursery at Centre ValBio has about 5000 seedlings, roughly half of which are ready for transplanting for reforestation. Nicolas Rasolonjatovo, the reforestation manager, and his team run a well-kept nursery with weekly inventories of all seedlings. They make trips out to previously reforested areas for weeding and cleaning, and to monitor the survival of transplanted seedlings. These post-establishment site treatments increase the survival rate of the seedlings by removing competitors.

A key to their success has been to wait until the seedlings are several months old (depending on species) before transplanting them.

The tree nursery at present is relatively basic, but does the job well. There are plans to expand it in the future. The nursery is organized into sections with wooden shelves to keep the seedlings off the ground and some netting to protect the seedlings from the rain. The seedlings are grown in small black poly bags in a mixture of soil and compost – made from food waste generated at Centre ValBio.

The seedlings are exposed to the elements from the time of germination, which also enables them to be hardened from the beginning.

Hiking to Collect Seedlings of Rahiaka for Reforestation 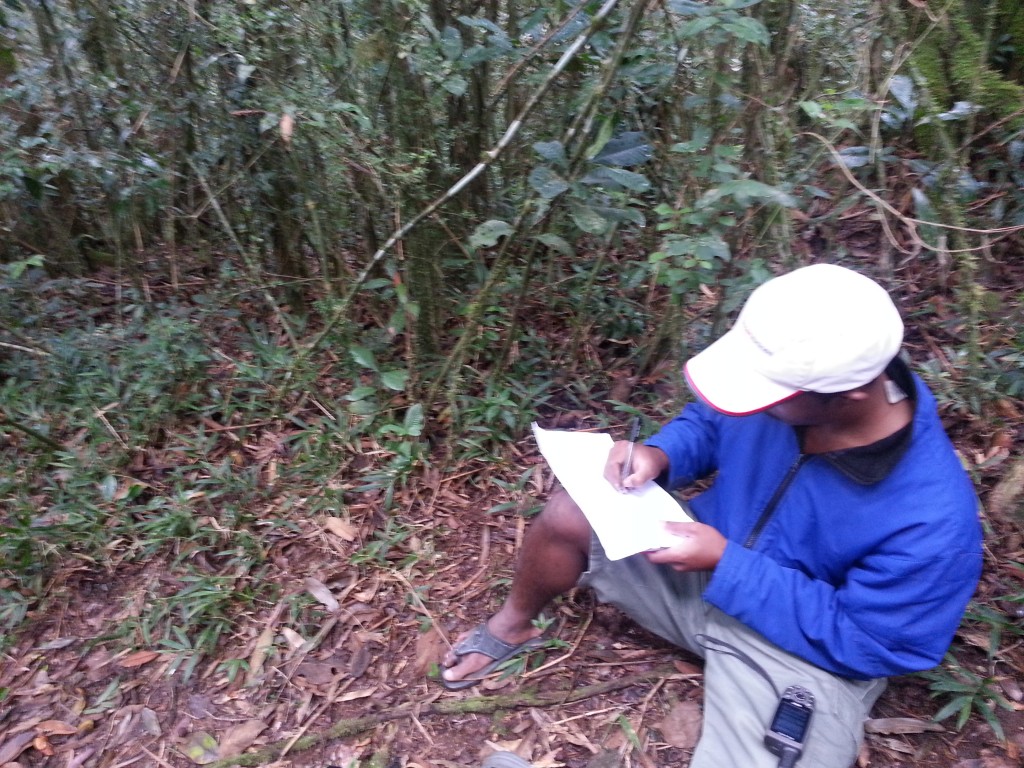 I accompanied Nicolas and the team to the trails at Talatakely one morning to collect seedlings of Rahiaka (Chrysophyllum boivinianum). We hiked about thirty minutes to get onto the trail which leads towards Vato, to get to these trees.

We quickly spotted the shiny black seeds of Rahiaka on the trail, assisted by foot traffic that had pounded away the outer fruit covering. Unfortunately, from the freshly disturbed soil, we could tell that a wild pig had also found the tree and as a result had eaten a good number of seeds around the tree, leaving us with empty shells or partially bitten seeds.

Nonetheless, after some searching we collected a sufficient number of viable seeds. We were also surprised to find a good number of Rotramena (Syzygium bernieri) fruit from a tree on the other side of the trail path. It was a good day with a good harvest.

I look forward to seeing these seedlings grow in the nursery. 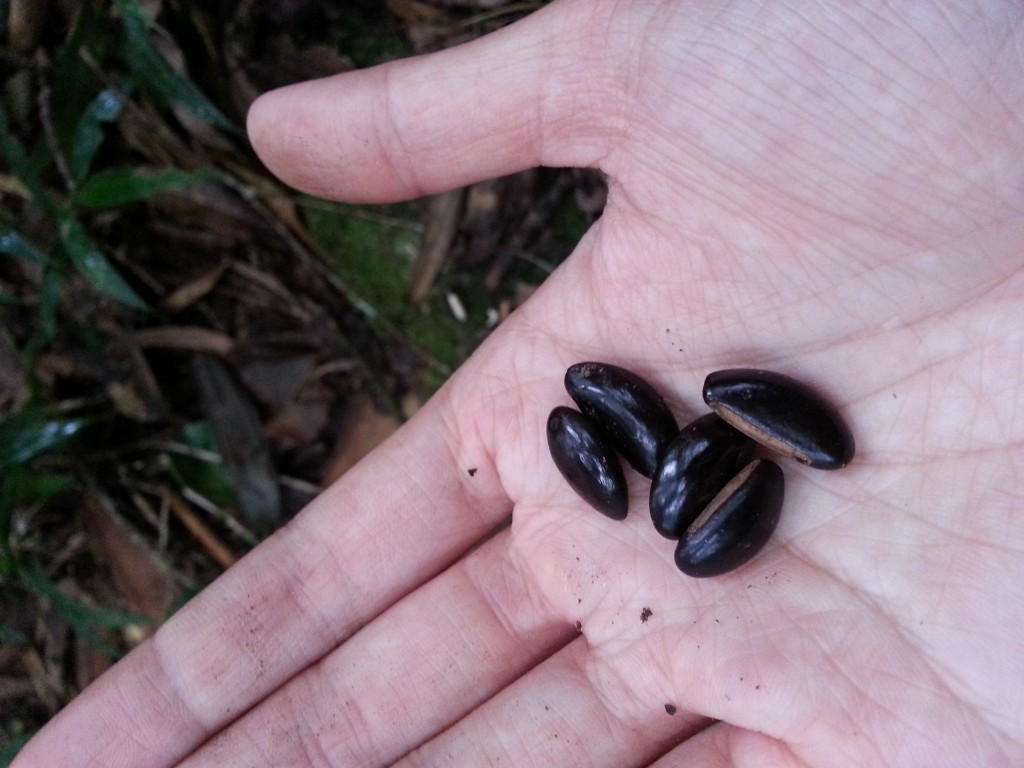