You are here: Home › Blog › Hiking and Camping in Anjanaharibe Sud Special Reserve
By Lynne Venart on September 2, 2019

In October 2018, I visited the SAVA region of northeast Madagascar for two weeks. My goals: 1) hike in Marojejy, 2) see the rare silky sifakas, 3) learn about local reserves in the area, and 4) learn about the Lemur Conservation Foundation (LCF)’s work in this region. More blog posts in this series:

Anjanaharibe Sud Special Reserve (ASSR) is rarely visited by tourists. In fact, when I asked my guide Jackson how many tourists he thinks had visited ASSR that year, he said, “Not many tourists. Just you.” I was excited to see ASSR in person, after learning about it from Dr. Erik Patel when we discussed his work in the reserve with the Lemur Conservation Foundation.

But why is it so rarely visited? 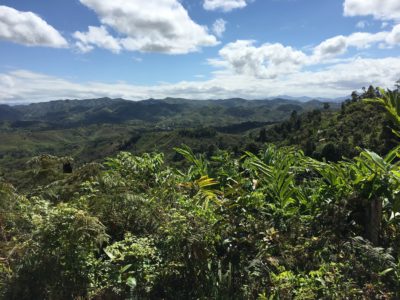 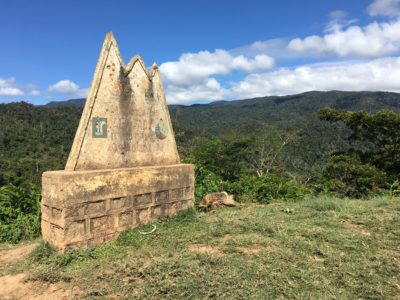 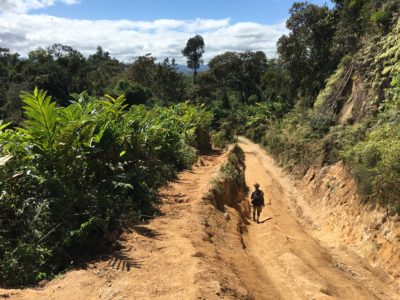 My guide Jackson on the now-dry road to and from ASSR. Photo: Lynne Venart. 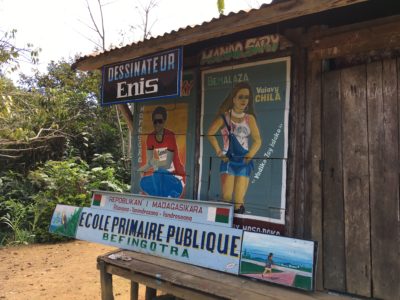 A school on the road to Anjanaharibe Sud Special Reserve. Photo: Lynne Venart. 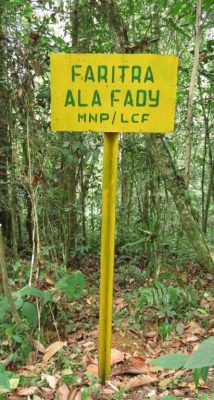 A boundary sign marking the edge of ASSR. Photo courtesy of LCF.

We spent a full day walking up and down forested hills past several villages. While the park isn’t frequently visited, this road is well-traveled. People walk this road all the way from Mahajunga on the northwest coast to Sambava on the east coast. Because Sambava is the vanilla region, this is where the money is. So, people bring zebu and other goods to sell in Sambava, because they can make more money here. They walk this road day and night en route to Sambava, passing the protected reserve on their left and right.

Seeing this road in person, my conversations with Erik Patel from LCF start making more sense. Erik emphasized the importance of the boundary demarcation work they were doing. Because the reserve is protected, Malagasy people are not allowed to take resources from the forest, including plants, trees, or animals. With people walking by day and night, it’s imperative that they know this area is protected. The signage that LCF installed is key.

After a long day’s walk, we veer left into the forest on a small trail, and hike a short distance before arriving at Camp Indri. The Lemur Conservation Foundation built this camp in 2015. Now, there is running water, a well-equipped kitchen, several tent pitches, and a lovely picnic area overlooking the river and its abundant bird life. Camp Indri was our home base for the next three nights. 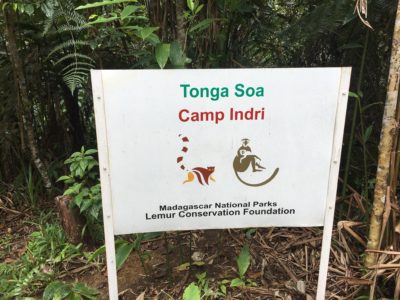 Camp Indri was built by the Lemur Conservation Foundation and is now maintained by Madagascar National Parks. Photo: Lynne Venart. 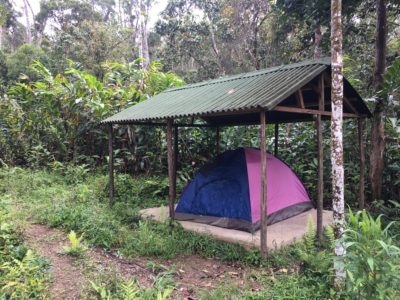 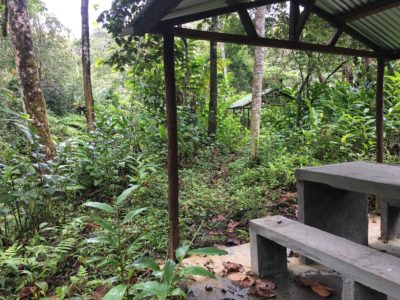 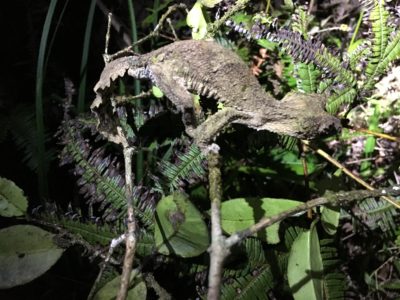 My guide Jackson found this leaf-tailed gecko on a night walk around the camp. Photo: Lynne Venart.

Before we even got to camp, we saw several white-fronted brown lemurs in the trees. This species was abundant in Marojejy National Park as well. They’re super cute! 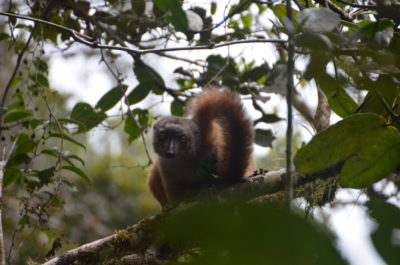 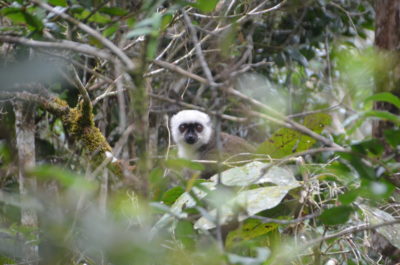 Hearing the Call of the Indris

On the morning of the second day, we could hear the indris calling from our campsites. So, my guides went off in search of the lemurs. While my guides were looking for silky sifakas and indris that inhabit the park, I spent a lot of time relaxing in the picnic area watching birds and butterflies near the river. And, waiting to hear from my guides that more lemur species were found! 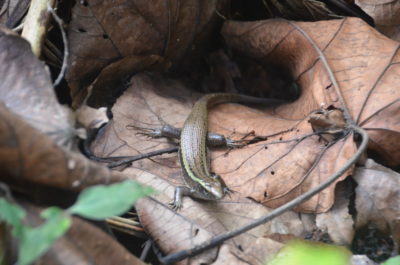 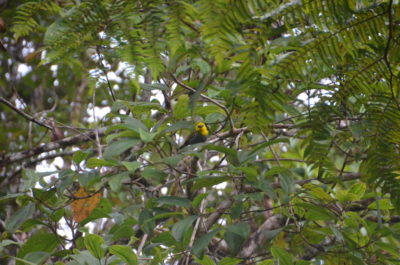 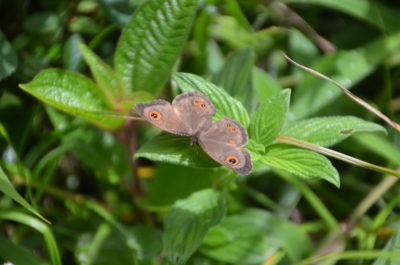 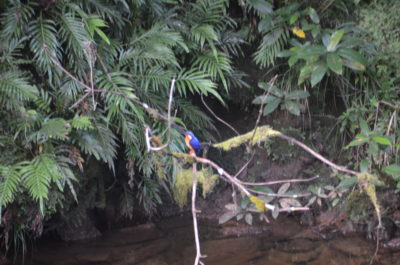 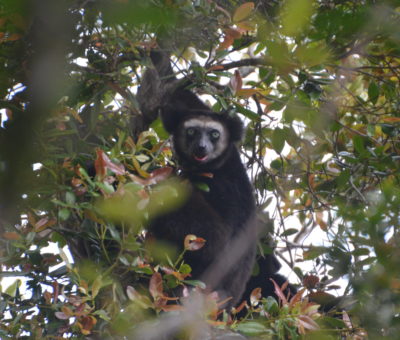 At last on the third day, Jackson walked back into the campsite to let me know they found the indris. We left camp again and hiked back to the part of the mountainous park where they were spotted.

Anjanaharibe Sud Special Reserve is the northernmost limit of the indri’s range. Here, indris are darker in color, with less white on their bodies and around the face. They are beautiful!

Having seen the lighter colored indris further south in Andasibe-Mantadia, I wonder why this is. Is the forest denser here, with less sky peaking through? Does their darker appearance help them blend into the surroundings in ASSR? There is little research into why this is; it’s still a mystery! 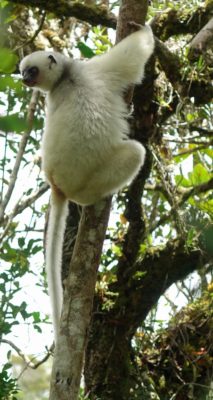 My guides also spotted a group of silky sifakas near Camp Indri!

Silkies are a flagship lemur species for Anjanaharibe Sud Special Reserve, and can be seen by visitors if you hire local trackers. As in Marojejy, silky sifakas have a very large range, so it can take a couple of days for your guides and trackers to locate them. So, be sure to plan for enough time in the reserve. There is also a second accessible group of sifakas near the Ranomafana Trail in ASSR.

Silky Sifakas are very rare and critically endangered. It is so important to protect their forest habitat in both Anjanaharibe Sud Special Reserve and Marojejy National Park.

These two parks are their only remaining habitats in protected areas.

Thank You to the Lemur Conservation Foundation

In addition to my guide Jackson, I want to thank Louis Joxe Jaofeno and Dr. Erik Patel at the Lemur Conservation Foundation for helping me arrange this portion of my trip to northeastern Madagascar. Please support their work!

Sambava doesn’t get as much tourism as other areas of Madagascar, so arranging things can be more challenging.Yet, I highly recommend the area to tourists and researchers alike. Most of the year, daily flights run from Tana to Sambava, so it’s actually quite easy to get to! It was inspiring to see first-hand the beauty and challenges of Marojejy, Anjanaharibe Sud, Antanetiembo, and Jackson’s Reserve.