You are here: Home › Blog › LCN Member of the Month: Duke Lemur Center
By Lucía Rodríguez on May 1, 2018
The Lemur Conservation Network member of the month showcases our members’ work, and shares how we can help them in their battle for lemur conservation. The month of May is dedicated to Duke Lemur Center. In this blog post, we interviewed Sara Clark, Director of Communications and Guest Experience Manager, who tells us all about their important work and how we can support them.

Tell us a little bit about the history of the Duke Lemur Center. 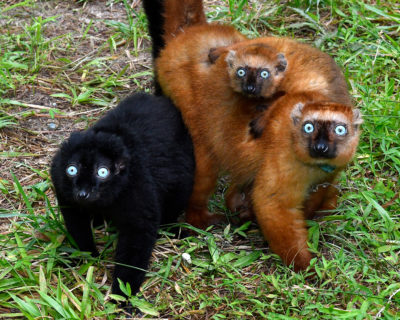 In 1966, John Buettner-Janusch, a Yale anthropologist, partnered with Duke biologist Peter Klopfer to relocate Buettner-Janusch’s colony of lemurs from Connecticut to the campus of Duke University in Durham, North Carolina. The National Science Foundation (NSF) provided the funds to build a “living laboratory” where lemurs and their close relatives could be studied intensively and non-invasively. In 1966, the nascent Duke Lemur Center (then called the Duke University Primate Center) was founded on 80 wooded acres, two miles from the main Duke campus.

52 years later, what began as a collaboration between two researchers studying the genetic foundations of primate behavior has blossomed into an internationally-acclaimed facility that supports research across a huge variety of disciplines.

The DLC is home to nocturnal, diurnal, and cathemeral animals as well as species that encompass a wide range of social systems, modes of locomotion, and dietary preferences.

Such diversity yields a large and diverse research program, and students and researchers from across campus and around the world travel to the DLC to study topics ranging from brain sciences to biomechanics, One Health disease dynamics, aging, paleontology, genomics, and more. The one thing that all DLC research has in common is that it is non-invasive: we do not allow research that will harm our animals.

Where is the Duke Lemur Center located?

A world leader in the study, care, and protection of lemurs, the Duke Lemur Center is a hub of scientific discovery on the campus of Duke University in Durham, North Carolina.

With nearly 240 animals across 17 species, the DLC houses the world’s largest and most diverse population of lemurs outside their native Madagascar.

Our mission is to advance science, scholarship, and biological conservation through interdisciplinary non-invasive research, community-based conservation, and public outreach and education. 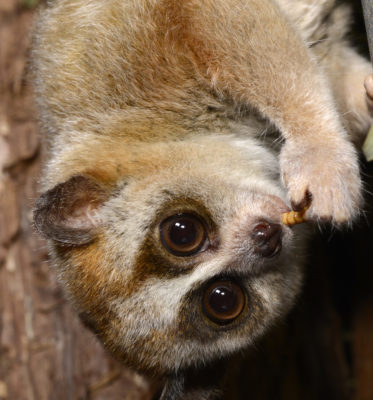 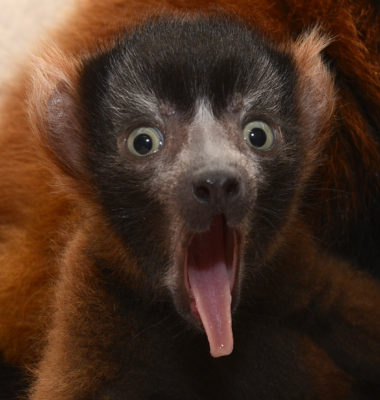 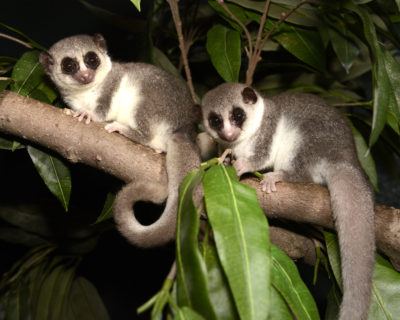 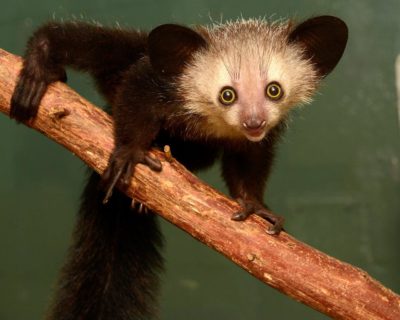 How does the Duke Lemur Center help lemur conservation?

The more we learn about lemurs, the better we can work to save them from extinction. Lemurs are the most endangered group of mammals in the world. They are endemic only to Madagascar and so it’s essentially a one-shot deal — once they are gone from Madagascar, they are gone from the wild.

By studying the variables that most affect their health, reproduction, and social dynamics, we learn how to most effectively focus our conservation efforts. And the more we learn about them, the better we can educate the public around the world about just how amazing these animals are, why they need to be protected, and how each and every one of us can make a difference in their survival. 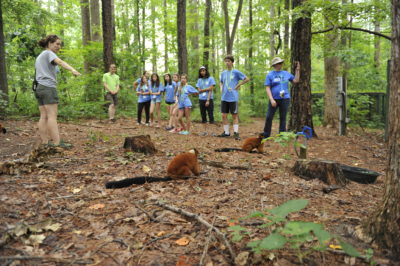 The DLC works “on the ground” with local Malagasy communities to preserve lemurs’ natural habitat.

30 years of conservation experience has taught the DLC that sustainable forest protection in Madagascar is a long-term investment that requires building relationships and earning the trust of local people.

The DLC-SAVA Conservation project relies on a community-based approach to protecting natural forests, using an array of project activities designed to protect the forest and to improve the lives of the Malagasy people.

The DLC also works within a network of other accredited institutions to develop and adhere to Species Survival Plans (SSPs), which use carefully planned conservation breeding programs to create a “genetic safety net” for rare and endangered species such as the aye-aye, sifaka, and blue-eyed black lemur. In partnership with these institutions, we’re helping to ensure “the sustainability of a healthy, genetically diverse, and stable” population of lemurs for the long-term future.

We’re proud to have celebrated more than 3,285 births since our founding in 1966.

Because its research is non-invasive, the DLC is open to the public. More than 25,000 people visit every year to learn about lemurs, science, and conservation. Revenue generated by our public tour program and camps helps fund the Education Department and pay for lemur care, housing, veterinary supplies, and conservation programs in Madagascar. 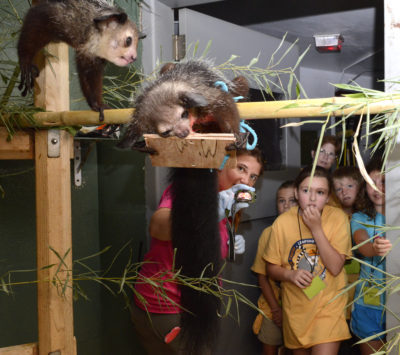 Our online resources and MicroCT scans of fossils from the DLC’s Division of Fossil Primates — available at no charge at morphosource.com ‚ are utilized internationally as educational and research resources. The Division of Fossil Primates itself comprises what is probably the world’s largest and most important collection of early anthropoid primates, the group that includes living monkeys, apes, and humans. In addition, its skeletal specimens of extinct giant lemurs from Madagascar are unmatched anywhere else in the world. 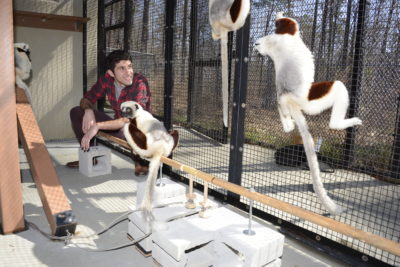 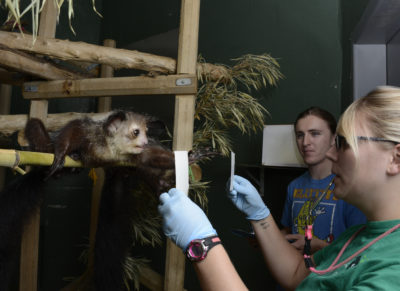 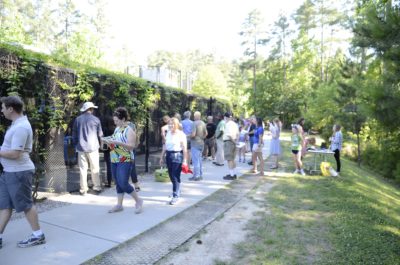 Do you have volunteer opportunities at Duke Lemur Center?

Volunteers are essential to the daily operations here at the DLC, and we couldn’t what we do without them! We offer a variety of volunteer opportunities that require different time commitments and focus on different interests, from animal care to gardening to public education. 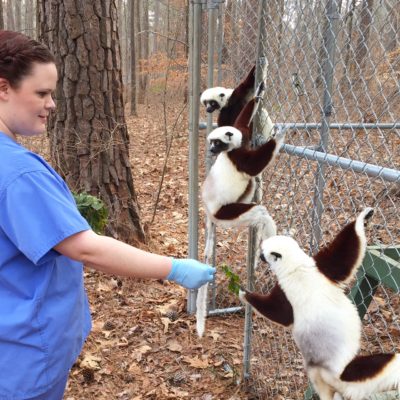 Keeper for a Day – Carrie Osborn 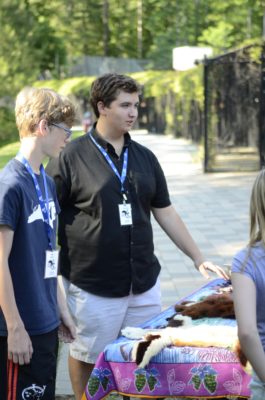 The Government of Madagascar’s (GOM’s) Wildlife Department has requested the assistance of the Duke Lemur Center to advance the state of lemur husbandry and breeding management in Madagascar’s zoos.

Working with the GOM, longtime DLC employee Andrea Katz has moved into a new role as Program Manager of Madagascar Conservation Initiatives. This project links the DLC staff’s expertise in captive conservation to urgent needs for improved lemur welfare and conservation breeding programs in Madagascar.

Andrea lived in Madagascar for more than 15 years and has played a vital role in much of the DLC’s work there over the past decades. She has also served as the DLC’s Curator, overseeing the care and husbandry of the DLC colony. In her new role, Andrea will expand the DLC’s work on the island to improve animal welfare, husbandry, and breeding programs for ex-situ lemur populations in Madagascar.

100% of funds for the DLC’s work in Madagascar – including Andrea’s new role – are from private donations and grants.

Getting the SOS Lemur Grant: What to Expect Next?
LCN Member of the Month: Centre ValBio