You are here: Home › Blog › Lemurs Celebrated Worldwide for the 2020 World Lemur Festival
By Lynne Venart on December 14, 2020

The 2020 World Lemur Festival was a great success! Thank you to all of the zoos, organizations, universities, artists, and lemur fans around the world who celebrated lemurs and spread messages about their conservation!

Compared to last year, the 2020 festival saw more organizations holding events, more social media about lemurs, and more money raised! Over twice as many organizations participated around the world, including zoos and universities in Madagascar, the United States, the United Kingdom, Europe, and Asia.

Looking back on World Lemur Day, we celebrate our successes and look to the future! Now more than ever, we need to raise awareness about lemurs and gain support for the urgent conservation needs in Madagascar. With 98% of lemurs in danger of extinction, let this news be a rallying cry for all of us. We must act every day for the people and wildlife of Madagascar.

Virtual Events Around the World

The 2020 festival included many virtual events, which helped to create new partnerships between zoos, universities, conservation organizations, travel agencies, and lemur fans around the world.

Events Held by the Lemur Conservation Network and our Members 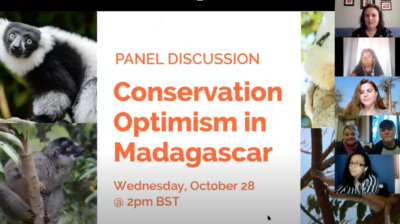 More virtual events by the Duke Lemur Center, the Lemur Conservation Foundation, Planet Madagascar, and many other conservation organizations and zoos helped them raise both funding and awareness for conservation in Madagascar. The Just the Zoo of Us podcast published an episode spotlighting the coquerel’s sifaka with Planet Madagascar’s Dr. Keriann McGoogan. And, Trav’s Travels featured LCN’s Madagascar Manager Dr. Seheno Corduant for a special World Lemur Day episode! 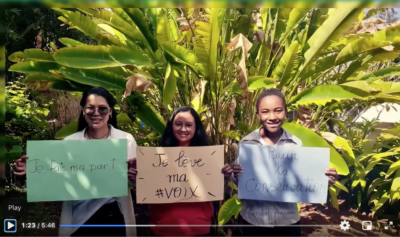 Students in the Agriculture and Sustainable Development course at University of Antananarivo made this video.

Virtual events are not very common in Madagascar, but many Malagasy organizations emphasized online efforts this year. For instance, a campaign to protect lemurs was led by Ary Saina. Followers sent their picture while holding a paper with inspiring words. They also organized a quiz called ‘Kahoot, Challenge: World Lemur Day 2020’ from October 30 to November 2.

The students in the Agriculture and Sustainable Development course at the University of Antananarivo or “Team ADD in Action” made a video to raise awareness about lemurs. Some of them were featured on the Radio Fanambarana on October 27 and on the Radio Universitaire Ambohitsaina on October 30 and talked about the issues that are facing lemurs in Madagascar.

And, LCN member MAHERY NGO and I.M.VA.VET, made a virtual presentation by Dr Ando Ravelomanantsoa Miharifetra about how to protect lemurs by chicken breeding. This webinar was very insightful, because their solutions for helping lemurs are very practical and affordable for the community.

Since the first World Lemur Day, GERP has always been the leader of the event in Madagascar. This year was quite special as GERP worked with the Ministry of the Environment and Sustainable Development (MEDD) to organize the celebrations and invited other organizations to join them. In addition to the debate on TV, MEDD persuaded the Regional Directorates of the Environment and Sustainable Development (DREDD, which represent the Ministry at regional level) to hold events in each region in Madagascar. There were festivals, workshops, exhibitions, debates, challenges, and videos!

View Photos and Videos from Regional Events on Facebook 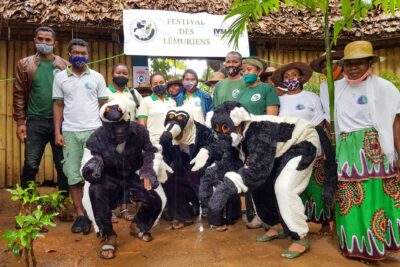 The 2020 World Lemur Festival celebrated by DREDD in Antsinanana, Madagascar 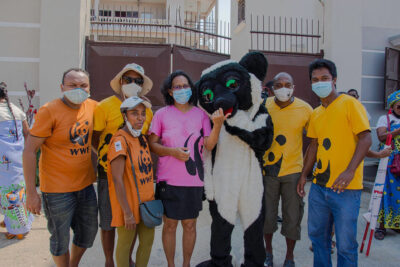 For the region of Analamanga, two exhibitions took place in Antananarivo. The first was made by the FNG Madagascar or National Guide Federation Madagascar and Madagascar Lemurs Portal in ORTANA Antaninarenina, and the second was led by Tsimbazaza Botanical and Zoological Park. 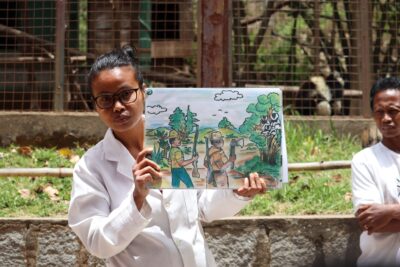 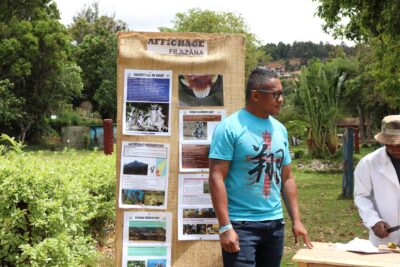 Zoos Celebrated Lemurs Online and Around the World

Many LCN members partnered with zoos around the world to hold virtual events. For example, LEEP at the University of Arizona partnered with the Reid Park Zoo, and SEED Madagascar partnered with the Five Sisters Zoo. We hope that these partnerships continue for years to come, because they benefit LCN members, zoos, people interested in zoos and wildlife, and of course, lemur conservation! 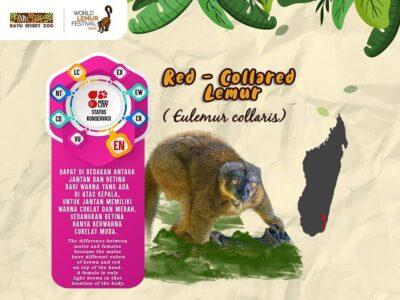 The Jawa Timur Park in Indonesia 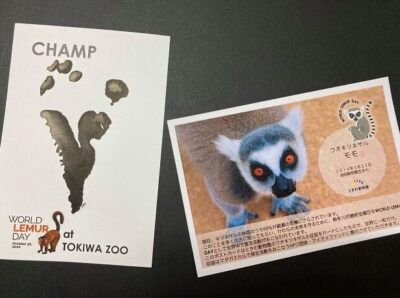 The Tokiwa Zoo in Japan 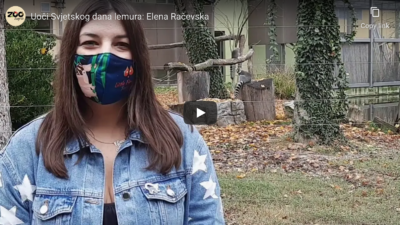 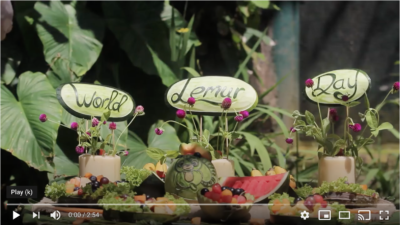 The Lemur Conservation Network raised 5 times more money than last year, with many thanks to the eight illustrators who donated their work to our store! We partnered with Beyond Good Chocolate, who helped us gain hundreds of Instagram followers and donated a portion of sales to lemur conservation. And, the Chengdu Foreign Languages School in China held fundraising events for the World Lemur Festival, raising money for the Lac Aloatra Bamboo Lemur!

With these increased funding opportunities, we were happy to provide donations to three member organizations to support their work: Mikajy Natiora, Conservation Fusion, and Madagascar Wildlife Conservation. 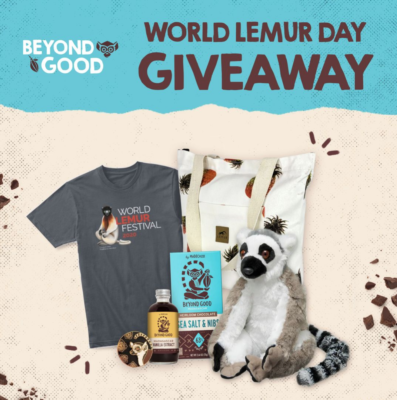 This partnership with Beyond Good Chocolate raised money for lemur conservation during the 2020 World Lemur Day. 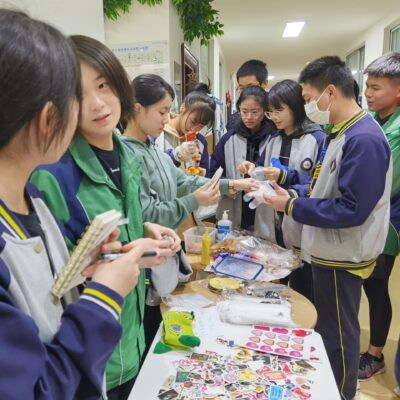 The Chengdu Foreign Languages School in China held a bumble sale and exhibition to raise money for LCN and support UN17 goals.

The World Lemur Festival was also embraced by artists worldwide. The artist who goes by the name Felinar Mr. Lemur created an illustration challenge for the month of October, encouraging other artists to create and post a drawing each day related to Madagascar. On Twitter, they used the hashtag #WorldLemurFestival to share artwork featuring lemurs and other wildlife from Madagascar for the whole month! 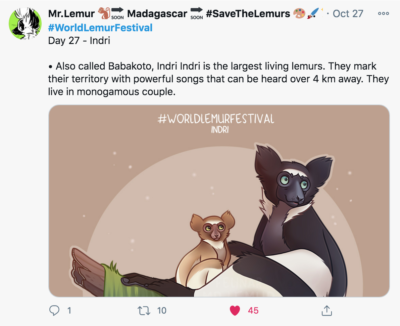 Artwork for the World Lemur Festival by Mr. Lemur 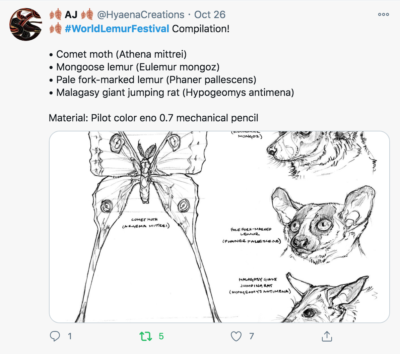 Artwork for the World Lemur Festival by Hyena Creations 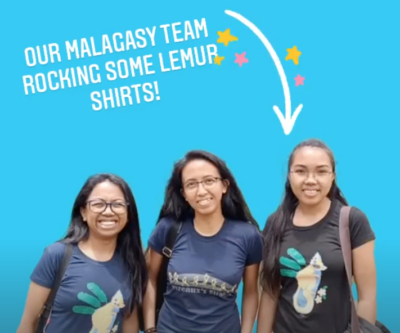 Donating Illustrations for our Store

Eight artists also donated one or more illustrations to support the Lemur Conservation Network through our TeeSpring store. You can buy their beautiful work through the end of January on t-shirts, pillows, stickers, and even fanny packs!

We want to thank all of you—our member organizations, lemur fans, and new partners we are building around the world. 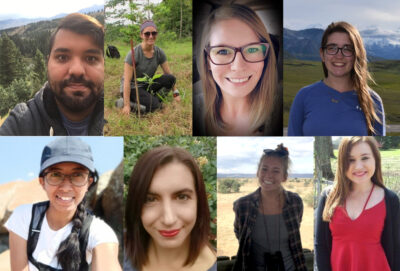 And this year, our team of volunteers deserves an extra round of applause!

This includes our 2020 World Lemur Festival team (pictured right) who helped zoos, school, and businesses around the world participate. And our science communication team, who created social media posts throughout September and October about World Lemur Day, and highlighting this year’s 3 featured species: the crowned sifaka, diademed sifaka, and collared brown lemur.

The efforts of these volunteers helped us see dozens of events, hundreds of social media posts, new partnerships, increased donations, increased learning about lemurs, and lots of new lemur fans to help us spread the word about lemur conservation. Thank you!

See you next year for an even bigger 2021 World Lemur Festival!

Eco Map- The Earth Needs You!
On the Ground in Madagascar with Mariah Donohue