Home » Traveling to the South of Madagascar

You are here: Home › Blog › Traveling to the South of Madagascar
By Phil Reeks on October 20, 2015 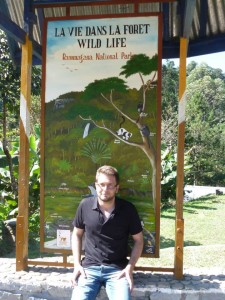 I’m Phil and am a volunteer with four species of lemur at Howletts Wild Animal Park in the UK. This year I have run a half-marathon for the Aspinall Foundation’s Madagascar project and fulfilled my dream of seeing lemurs in the wild. This post continues my series of blog posts on my first trip to Madagascar.

Continuing on from Andasibe and Ranomafana, I was sad to be leaving behind Madagascar’s rainforests. I don’t know when or where I’ll next be able to stand in awe of jungle, its sights, its sounds, its wildlife.

I wasn’t quite done with lemurs though, oh no.

Madagascar’s south is drier, warmer and has more of a mainland African feeling to it. This is the area where the world famous baobab trees grow, evolving perfectly to suck up and store any moisture. Of course, it’s not just the baobabs which have adapted to the harsh conditions – many lemurs have. 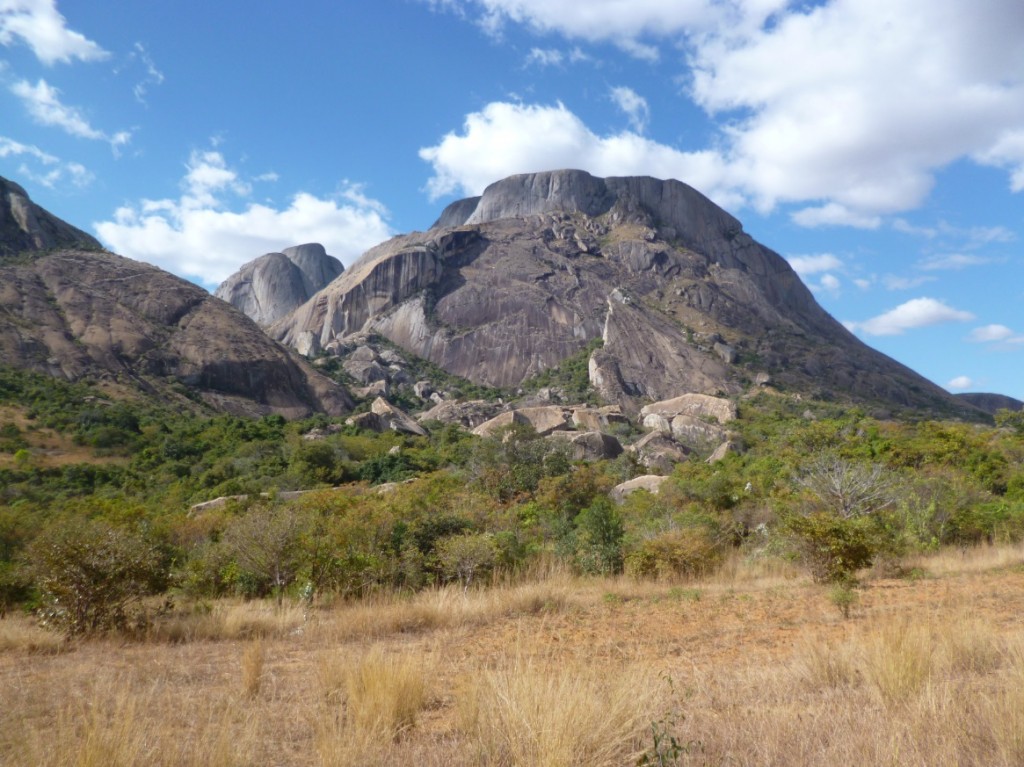 The south is also the home to the island’s most famous inhabitants – ring-tailed lemurs. Suffering from what I can only describe as Malagasy Man Flu, my first encounter with them inside Anja Community Reserve was rather subdued.

Anja is home to 300 hundred happy and very vocal ring-tails. Almost every Western zoo seems to have ring-tails, so to see them roaming and resting in their own natural environment was exhilarating. You don’t get the full soundtrack in captivity either, the distinctive mix of meows and barks unlike no other animal. I retired to the tour bus fatigued but fulfilled. 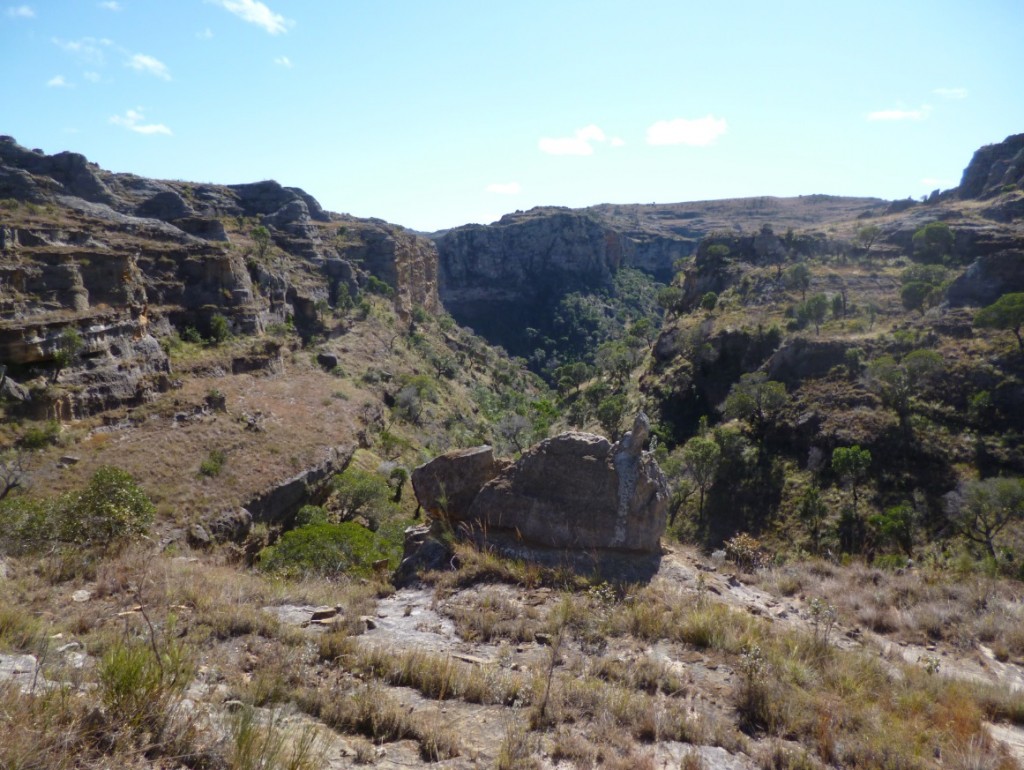 The next day we were at Isalo National Park. Unaffected by monsoon season, it is the country’s most visited national park and boasts mountainous, rugged terrain where every scene is worthy of a postcard. Did I drag myself out of bed to enjoy these geological marvels? No. I went for the lemurs.

Isalo is a stunning place, its landscapes a mixture of Clint Eastwood movies and Andean highlands. In one place though is a lush canyon, a river having carved out steep cliffs and allowed thin strips of forest to blossom. There’s also a picnic area for tourists needing a break… 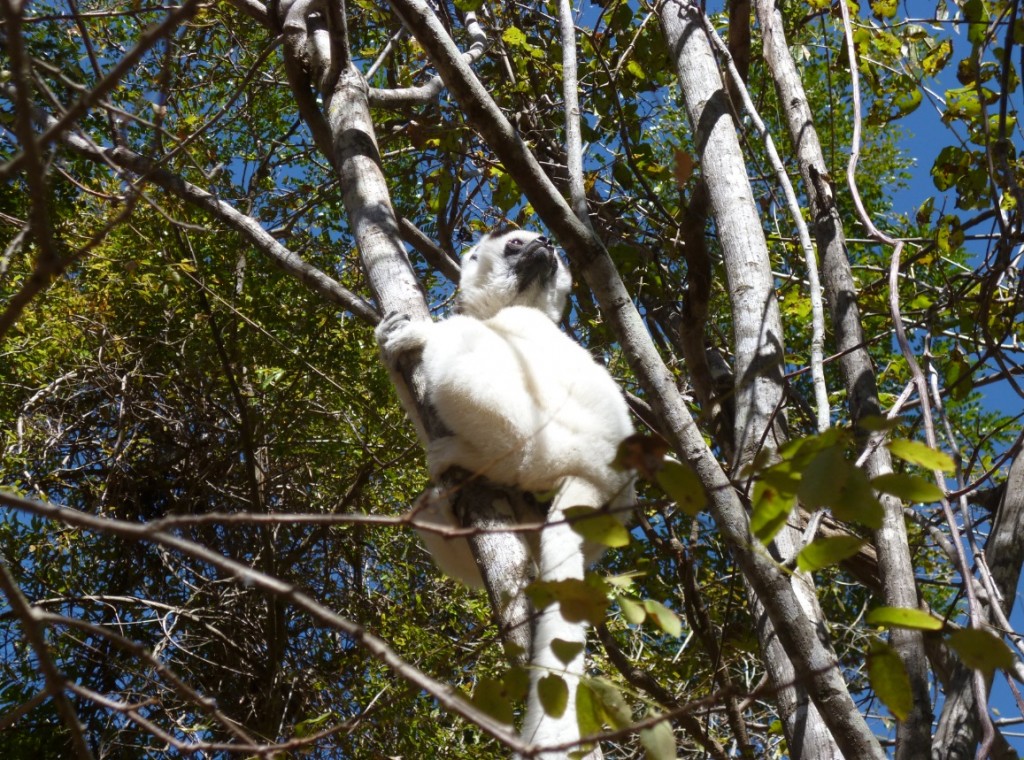 The valley is home to three species of lemur – ring-tails, a Verraux’s sifaka and red-fronted brown lemurs. Now you’d expect the two former species to garner all of the attention but the red-fronted browns stole the show, amongst other things.

Initially the ‘dancing sifaka’ was the star attraction. Depressingly, there were six in the area only a couple of years ago. Now there is one, and he or she looks somewhat old. No one knows what happened to the other five, making for an upsetting example of a species going extinct in an area. 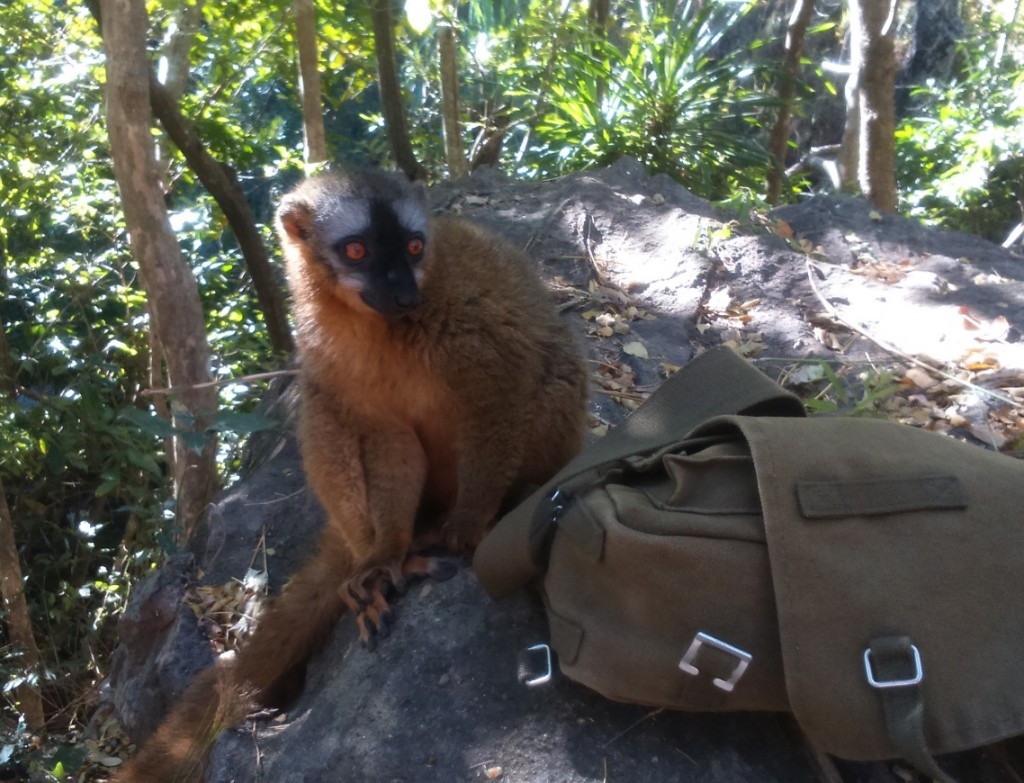 We left the sifaka in peace, sitting down to enjoy a zebu barbecue with fruit and salad. We weren’t alone, however – four red-fronted brown lemurs sat staring, poised for any opportunities when a human looked the wrong way. Our cooks may have tried to chase them off but these lemurs are patient, cunning and quick.

Their chance came when someone absent-mindedly walked off eating pineapple. In a flash, a male was clambering up her and darted off with his prize, leaving behind one startled lady and some highly amused tourists. Come on, naughty animals are the coolest.

My group went on to swim in one of Isalo’s many picturesque natural pools, whilst I relaxed with my new lemur friends. It was almost goodbye to Madagascar and the brown lemurs who had stolen my heart. 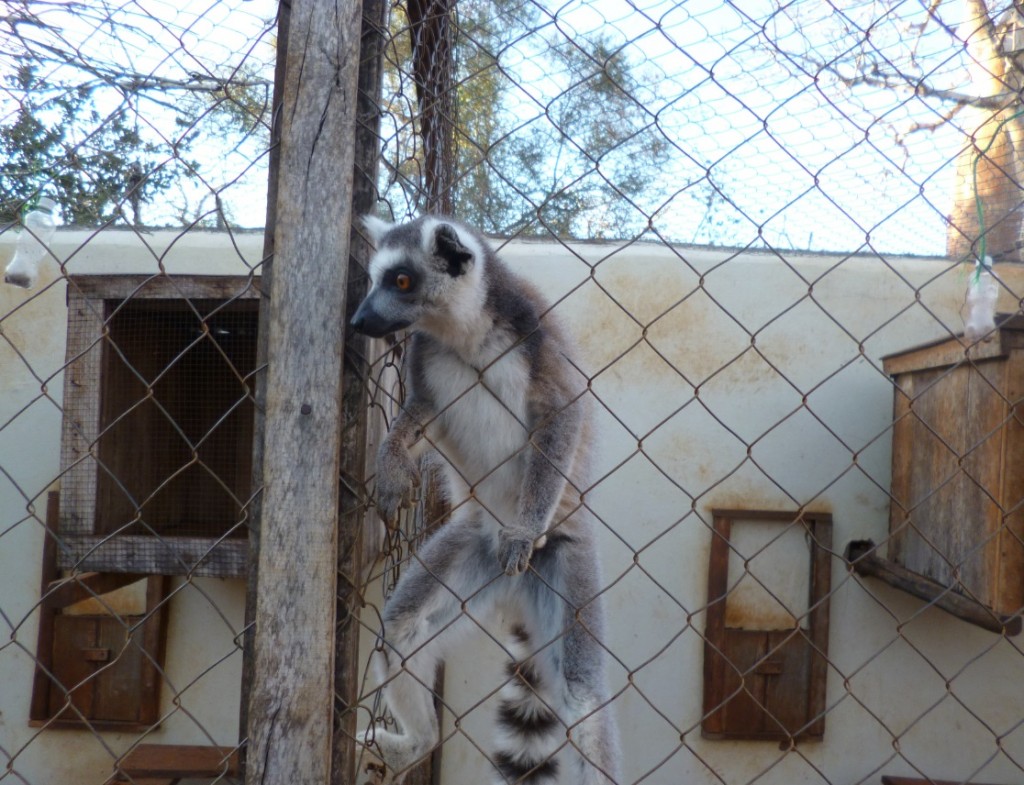 We were supposed to bid farewell to Mada with three peaceful days on the beaches of Ifaty. I saw my last wild lemur in the nearby spiny forest, a sleeping white-footed sportive lemur.

This is also the home to Reniala Rescue Centre, a sanctuary for rescued ring-tails with the aim of re-introducing them to the wild. Arriving late I received a brief but enlightening tour, the lemurs within looking healthy and content. I would have offered tips on zoo enrichment but they had all bases covered!

I was supposed to return the next afternoon for a meeting. Madagascar, though, is rarely easy. A strike by the national airline caused our flight from Toliara to be cancelled. This meant an early departure and 24 hour bus to Antananarivo, so I rushed back to Reniala but no senior staff were present. If you read this then apologies again, but I am now proudly wearing a rescue centre t-shirt around England.

I won’t go into details of the bus journey, you can guess how grueling it was.

A Visit to the Aspinall Foundation 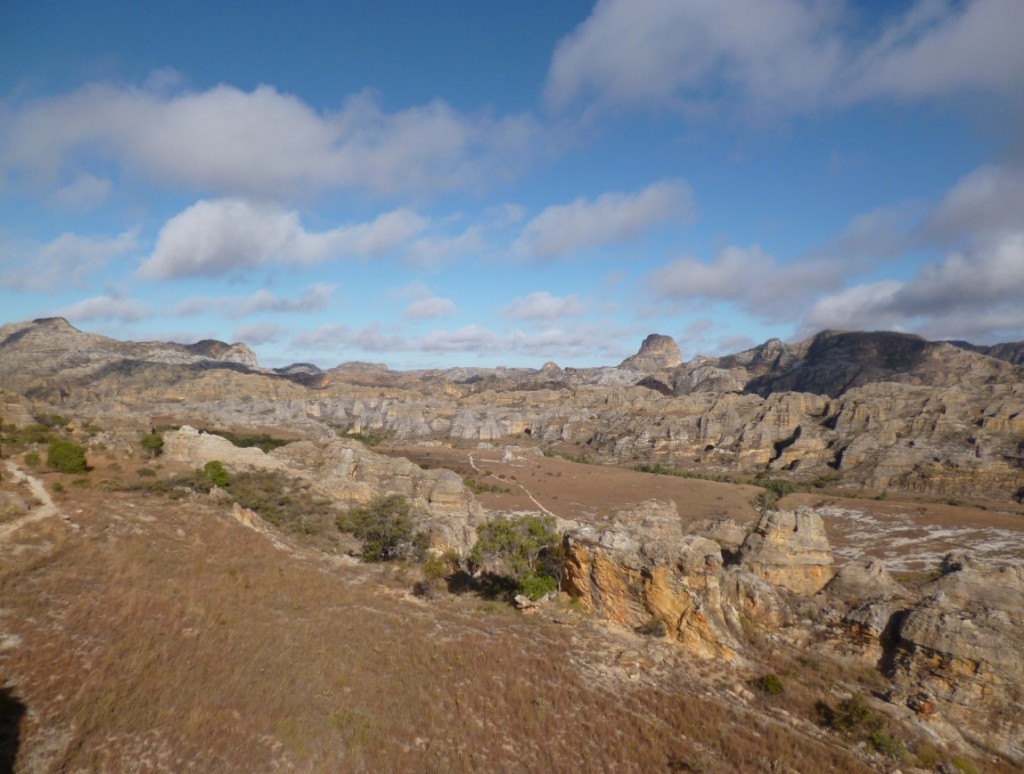 Once showered and refreshed in Tana I had one final call of duty – a visit to the Aspinall Foundation, the charity of Howletts Wild Animal Park where I volunteer.

I’ve also run a half-marathon for them so an insight into how the team works was fascinating. The Foundation manages a large protected area near Andasibe, home to nearly a dozen lemur species including many critically endangered. There are roughly ten field sites and I was humbled to be given a photo tour and talk, whilst showing off my pictures of Howletts’ own primates. As well as field work, the project assists and enables local communities, so that the next generation have a greater understanding of the environment and the region’s unique fauna. This means the best possible chance of survival for greater bamboo lemurs, black and white ruffeds, aye-ayes and so on.

Heading Home: Final Thoughts on My First Trip to Madagascar

Flying away from the island, you are reminded just how barren and desolate much of the landscape is. The trees are gone and without them the farmland is washed away. The population is booming and very little foreign aid is donated.

To save lemurs we must also help to save Madagascar’s people, a warm, welcoming but troubled population. Hopefully soon this will change, because human, lemur or chameleon, we are all in this together.