Home » Stronger together: Launch of the First Nationwide Campaign on the Illegal Pet Lemur Trade

You are here: Home › Blog › Stronger together: Launch of the First Nationwide Campaign on the Illegal Pet Lemur Trade
By Kim Reuter on July 10, 2016 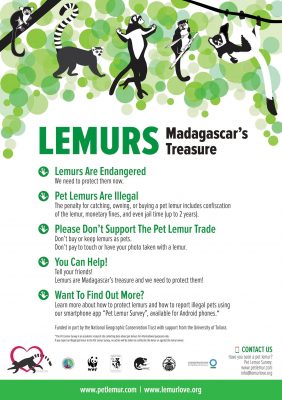 One of the outreach posters being put up (in eight different languages) across Madagascar!

Lemurs, native to the island of Madagascar, represent the most Endangered group of mammals in the world. Habitat loss, hunting, and more recently a burgeoning illegal pet trade are pushing wild lemur populations to the brink of extinction. Pet lemurs are often used to attract tourists to hotels or used as photo props, wherein tourists pay a small amount of money to take their picture up close with the animal; about 15% of hotels in Madagascar advertise pet lemurs on their websites or social media pages. Because adult lemurs are difficult to keep as pets, lemur owners are motivated to be rid of adult animals and seek subsequent infants to satisfy guests. This cycle of ‘disposable’ lemurs is unsustainable; between 2010 and mid-2013, over 28,000 lemurs were estimated to have been kept as illegal pet lemurs in Madagascar.

As we approach mid-July, lemur conservationists are buzzing with excitement and anticipation for the official kick-off of Madagascar’s Treasures: Keeping Lemurs Wild Campaign, a nationwide educational and outreach campaign to tackle the growing issue of illegal pet lemurs within the island nation.

When will the campaign be launched?

To officially launch the event on July 12th, conservationists from around the world will gather at the American Center in the capital city of Antananarivo for the official launch of the campaign. The event is being hosted by campaign organizers and Lemur Conservation Network members, Lemur Love, Inc. (a 501c3 non-profit) and the Pet Lemur Survey (a collaborative research effort between the University of Utah, Conservation International Madagascar, and the Groupe d’étude et de recherche sur les primates (GERP)), and will be open to the public, followed by an invitation-only cocktail hour.

The launch event will host several key speakers, including Dr. Jonah Ratsimbazafy (an advisor to the Lemur Conservation Network) as well as a panel discussion in which to engage and educate audience members about the threats and impacts of the illegal pet trade of lemurs,  and to inform them of the goals of the education and outreach campaign. Ultimately, this collaborative effort aims to Keep Lemurs Wild.

What will the campaign achieve? 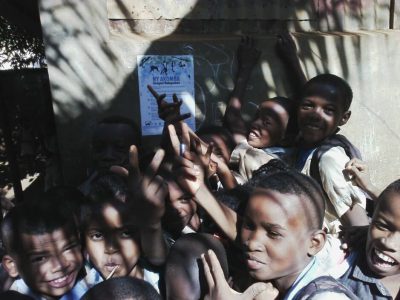 Children crowding around an outreach poster hung up in Antsiranana, Madagascar by the Pet Lemur Survey!

Thanks to funding from the National Geographic Conservation Trust and the Margot Marsh Biodiversity Foundation’s Primate Action Fund, and together with a wide range of partner NGOs (including WWF Madagascar, Association FILANA and Association Mitsingjo), outreach posters will be hung all across the island to help raise awareness that lemurs should not be kept as pets. In fact, the first posters have already been hung in the MICET offices in Tana as well as in a school in Antsiranana, northern Madagascar! These posters will often be accompanied by outreach presentations which will be tracked using a google map, showing the impact of the outreach project.

The campaign, in addition to undertaking outreach efforts, also aims to help the scientific community overcome data availability issues on this topic. Thanks to the Pet Lemur Survey, the campaign will be launching an interactive website where the public can visualize the pet lemur trade using interactive maps as well as a smartphone application where people can provide anonymous information about pet lemurs that they’ve seen.

How you can help 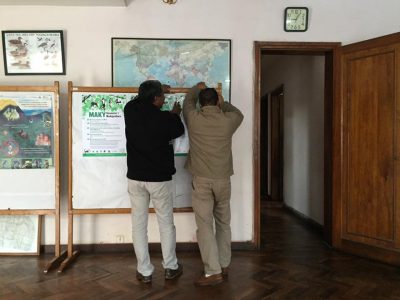 Outreach posters being hung up at the MICET office in Tana courtesy of Lemur Love!You can help the launch of the Madagascar’s Treasure: Keep Lemurs Wild! campaign by helping out in the following ways: