It has been an eventful few months in the lemur walk-through at Howletts. With another crowned lemur born and the introduction of a black and white ruffed, there have been ten prosimians enjoying the mild weather and fruiting trees. Getting them to bed is tough when they have a permanent natural buffet on offer!

In all, visitors can now hope to see 5 crowned lemurs, 3 red-bellies and 2 black and white ruffed’s (Varecia variegata). There is a hierarchy but they live (mostly) in harmony and each add their own characters and quirks to the area. The crowned’s are a devoted and close family, the three red-bellied boys may be the cutest, and without doubt the ruffed’s are the noisiest. 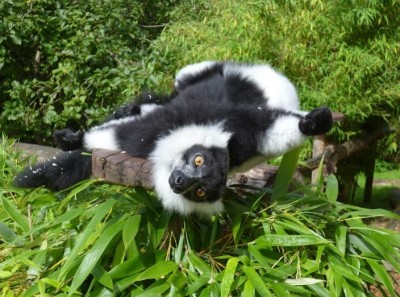 Aramis relaxing in his habitat. Photo courtesy of Phil Reeks.

There’s also no doubt about which individual is the most misbehaved and biggest show off. I’ve been volunteering at Howletts for eighteen months and I have been very lucky to get to know Aramis. He arrived in 2013 from Dudley Zoo, whom affectionately described him as “mischievous and light-fingered.” They weren’t wrong.

However, he also has a lot of love to give. Sadly, his mate at Howletts fell ill in 2014 – in her final days Aramis watched over her and was left in a tough place emotionally when Grunge passed on. He was an unfortunate example of a primate displaying grief, or something very close to it.

Whilst red tape and paperwork held up the arrival of a new female, he was introduced to his cousins in the walk-through and quickly became the star of the show. If he’s not sunbathing he is trying to inspect guests’ bags for food, and if he’s not screaming and making children cry he’s trying to break into the shed where he knows dinner is kept.

Direct contact with the lemurs is forbidden, but at meal times Aramis has learned that if he jumps on the keepers’ shoulders, he can steal grapes before other lemurs can get a chance. He will also try and play tug of war with the bowl, burying his nose in the food and sniffing out the sweet stuff. He will not stop chasing you until he is certain he has taken all of his favourites. Then he’ll contentedly stare skywards as he chews away, making sure he catches all of the juice and nutrients. 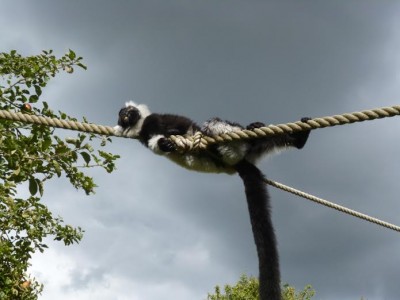 Between meals he can be found harassing members of the public. He also appreciates relaxation time, though. He is a typical ruffed lemur in that he knows how to sprawl out and chill, often displaying his black belly so that his dark fur absorbs sunlight. He has led a pleasant life at Howletts but there was something missing, someone to groom and sleep and shout with.

I was concerned before Akisa’s arrival that she would enter the fray and want to stamp her authority all over the walk-through, tangling with the dominant lady of the crowned lemurs. However, I needn’t have worried. She is a gentle, somewhat quiet girl who fit seamlessly into the pecking order. In fact, as usual it was Aramis causing trouble, this time chasing off the other species so that his new mate got her fair share at meal times (after removing his favorites, of course).

Whilst Akisa spent a short time in quarantine, Aramis could see her through the shed’s fencing, helping him become accustomed to the idea of another ruffed lemur. He was immediately besotted. A few days later he was following her around like an over enthusiastic teenager, cuddling her and cleaning her and joining her whenever she felt like wailing and marking her new territory. This also acts as a bonding exercise, bringing the pair closer together. 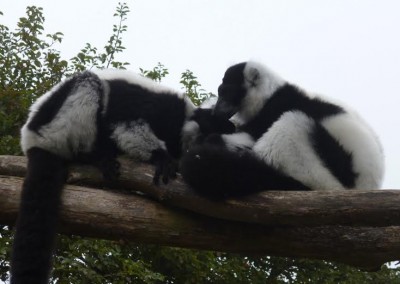 Akisa is growing in confidence. Presumably her last zoo in Spain had ropes rather than trees for her to climb – she has had to learn that you can’t put all of your weight on all of a branch all the time. Living in an ex-orchard she’s also enjoyed foraging naturally, impressively hanging upside down whilst munching tasty, over-ripe apples.

The future for Aramis and Akisa

We of course hope that the pair produce offspring. I have been told that Akisa’s DNA is quite unique and without going into details, Aramis is definitely keen on the idea. Gestation is about three months, if or when that time comes about I will honestly have trouble containing myself. They will make excellent, attentive parents. 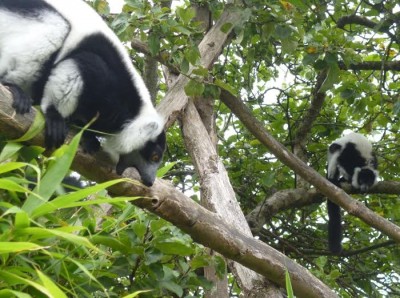 In their native Madagascar, things are more bleak for ruffed lemurs. They are secretive animals in the wild, most content in primary rainforest. This means that they are highly susceptible to habitat disturbance. Despite their commonplace in zoos, they have been listed as critically endangered since 2008. The IUCN believes their population to have declined by more than 80% in three generations (only twenty-one years).

The usual suspects are the cause of this – slash and burn farming, logging, mining and hunting. There is some hope, however. As one of the most recognizable species in Madagascar, there are a few dedicated organizations doing their utmost to protect those remaining. This includes Howletts’ Aspinall Foundation.

In 1997, Duke Lemur Center and Madagascar Fauna & Flora Group released 5 black and white ruffed lemurs born in captivity, known as the “Carolina 5,” into the wild. This was the first ever release of captive-bred lemurs to their natural habitat. Their offspring are still alive and thriving today.

Maybe one day, Aramis and Akisa’s grandchildren will be able to make the long journey home to Madagascar.