Home » Madagascar is Burning: Meet the Conservation Heroes Working to Bring the Forests Back

You are here: Home › Blog › Madagascar is Burning: Meet the Conservation Heroes Working to Bring the Forests Back
By Corey Romberg on January 5, 2016

If you picture the landscape of Madagascar, what images first come to mind? Never-ending rainforests? A paradise unspoiled?

These images may be the Madagascar that once was, but it is not the Madagascar of today. While there are many national parks and reserves with those lush rainforests you may picture, a lot of the island’s original forests have been cleared. Today, Madagascar is often a country on fire. 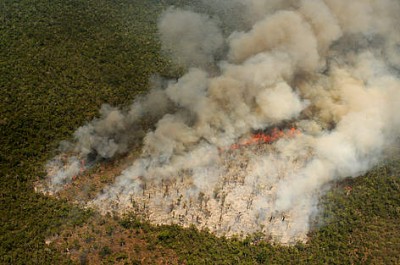 An overhead view of a slash-and-burn fire raging across Madagascar’s forests. Photo courtesy of WWF Madagascar.

Much of this deforestation is from slash-and-burn agriculture, from both large commercial businesses and local communities.

Learn about habitat loss in Madagascar.

But what exactly is slash-and-burn agriculture? And what is being done to protect and restore Madagascar’s forests?

What is slash-and-burn agriculture?

Slash-and-burn agriculture is a method of clearing forest land for farming. This burned vegetation creates an ash that temporarily provides nutrients to the infertile soil, so that a farmer can grow crops. However, the nutrients usually only last a couple of growing seasons. While the original plot of land will eventually regenerate, it can take 10 to 15 years. With this slow regeneration time, farmers have to choose between returning to land that has not yet fully recovered, or burning new plots of land to start the process over somewhere else. 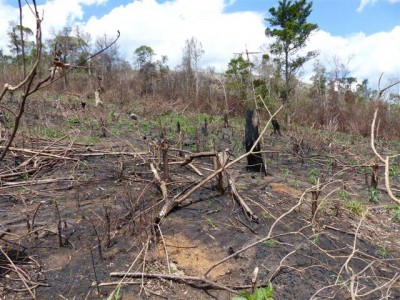 The history of slash-and-burn in Madagascar

Humans settled Madagascar less than 2,000 years ago. It was a French colony in the late 1800s until its independence in 1960. During this time of colonization, almost three-quarters of the island’s primary forest was cleared for French interests and policies (Jarocz, 1993). From the 1950s to 2000, there was an additional 40% decrease in Madagascar’s forests (Harper, 2007).

Slash and burn agriculture was not as problematic when human population numbers were lower and more stable. But this is no longer the case. With Madagascar’s human population increasing rapidly, there is not enough new land to be cleared and burned for shifting cultivation to be sustainable.

The effects of slash-and-burn on Madagascar’s wildlife

One of the most obvious effects of slash-and-burn agriculture is the loss of habitat for Madagascar’s wildlife. Habitat loss is a key reason that 98% of all lemur species currently face extinction. But many other native species in Madagascar also suffer from extreme habitat loss, including fossa, tenrecs, geckos, and birds.

Learn about habitat loss in Madagascar.

Some of his habitat loss is caused by large commercial enterprises who clear land to plant corn for beer or export. And, some is local and small-scale. The result is fragmented forests. This fragmentation isolates populations of animals, so that lemurs in one fragment no longer breed with lemurs in another. This can cause genetic bottlenecks and less healthy wildlife populations. 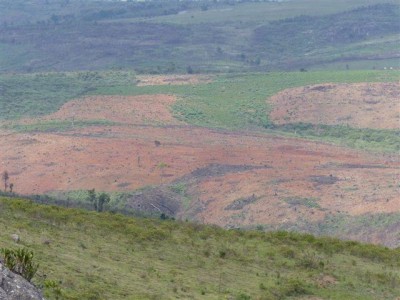 The effects of slash-and-burn on Malagasy people

Slash-and-burn has many consequences for Malagasy people as well. Clearing of trees exposes the soil to more rain than it can absorb. This causes soil erosion, and often makes the land no longer able to farm. The erosion also causes run-off into the ocean, which decreases the fish populations that many people rely for food and income.

The impact of deforestation on climate change

Deforestation is also a leading contributor to climate change.

In fact, deforestation contributes more carbon to the atmosphere than all the world’s cars and trucks combined.

Without trees to breathe in carbon dioxide that we breathe out naturally and produce unnaturally, the carbon stays trapped in our atmosphere, forming a heat blanket that is warming our planet at an alarming rate.

Learn about the impacts of climate change in Madagascar.

There is still a lot of hope in Madagascar. Luckily, there are many great conservation heroes who are providing that hope, and fighting each and every day to protect the forests that remain in Madagascar, to reforest habitat corridors, and to empower Malagasy people. Below are some of the LCN members that are leading the way.

Eden Reforestation Projects has been working in Madagascar since 2007, planting of hundreds of millions of dry deciduous and mangrove trees in the northwest. They aim to plant billions – yes billions – of trees in Madagascar in the next decade. 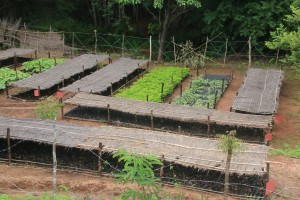 The overwhelming majority of the tree species grown are endemic to Madagascar’s western regions and virtually all of the species grown are native and essential to the well being of the lemur species that inhabit the dry deciduous forests. Their most notable lemur habitat partner is Ankarafantsika National Park; the organization has a full nursery operating within the confines of the park. They also partner with the Antsanitia Resort where they operate their largest nursery and project sites. Hundreds of hectares have already been planted and/or protected and the survival rate of saplings is high.

Eden’s approach to restoration and protection efforts begin with their nursery and reforestation leadership training center that they affectionately call “The Hands in the Dirt Training Center” (HDTC) located in Mahajanga. The HDTC, as the name implies, emphasizes practical training so that their reforestation managers gain valuable hands-on experience in nursery seedling management and effective reforestation techniques.

Madagascar Biodiversity Partnership (MBP) is another leader in reforestation efforts in Madagascar, with four project sites across the island. They work with local communities at each of their sites to discuss their needs and find solutions, like their successful conservation credits reward program, the distribution fuel-efficient cook stoves, and community garden projects. 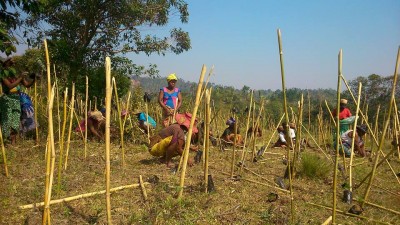 The MBP’s largest reforestation programming is based in Kianjavato and is called the Education Promoting Reforestation Project (EPRP). This program’s success is based on the fact that seeds which have passed through a lemur’s intestinal tract grow better than seeds that haven’t. By collecting the seeds in lemur poop, the MBP has been able to plant over a million trees.

Reforestation at Centre ValBio has been a mainstay of the field station since its founding. Working with landowners in the periphery of the park, The centre has established reforestation plots on private land as well as a demonstration agroforestry plot which has vanilla vines growing on native trees for support. They also undertake educational outreach to teach the value of trees, not just for animals, but for clean water and erosion control as well. 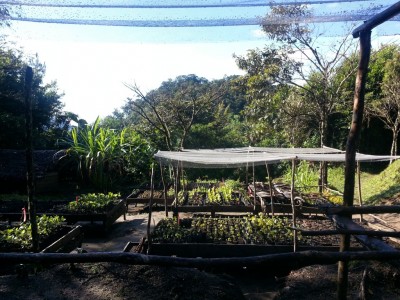 The reforestation program only uses trees which are native to the region, the seeds for which are gathered from within Ranomafana National Park and germinated in a tree nursery. There are 29 tree species being planted at the nursery. These trees include trees which are important sources of food for lemurs such as the Ramy tree and Rotramena. Other trees also are important for traditional medicinal use, while some are sources of timber for buildings.

The team makes trips out to previously reforested areas for weeding and cleaning, and to monitor the survival of transplanted seedlings. These post-establishment site treatments increase the survival rate of the seedlings by removing competitors.

The Wildlife Conservation Society (WCS) collaborated with the government of Madagascar to establish Makira National Park. This park protects one of the largest and richest remaining forests in Madagascar, and holds huge potential for carbon credits. WCS’s carbon credits program creates a sustainable source of financing that contributes important resources to the implementation of ecological resistance.

Revenues from sales are used to incentivize local communities to participate in conservation activities through grants for community development projects, such as infrastructure or technical training programs that implement climate-smart agricultural practices, enhance agricultural output, and expand livelihood options. The results of this program have included a doubling of household incomes in villages around Makira National Park, an avoidance of the loss of 23 square miles of forest between 2005 and 2013, and over 700 acres of new forest established to increase connectivity for highly endangered lemur species.

How can you help?

Learn how you can help.

On the Ground in Madagascar with Jen Tinsman
Zookeeper’s Notebook: Spotlight on Black-and-White Ruffed Lemurs