Home » The Story of the 2021 World Lemur Festival Logo 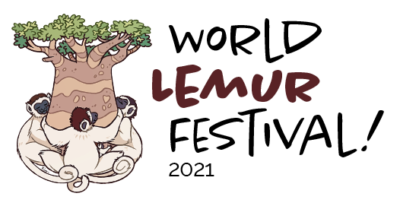 The 2021 logo features an illustration by Felinar Mr. Lemur.

This year’s World Lemur Festival and World Lemur Day logo features an illustration by the artist Mr. Lemur. We chatted with Mr. Lemur about his inspiration for the illustration. And, we spoke with Dr. Chloe Chen-Kraus, the scientist who took the photo that inspired Mr. Lemur to create it.

Learn what inspires Mr. Lemur, if sifakas really hug trees, and how conservation can allow humans and lemurs to coexist in Madagascar’s remaining forests. 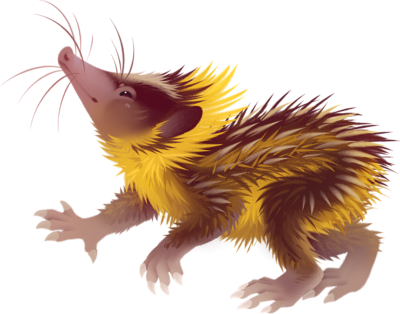 Mr. Lemur also illustrated this Madagascar tenrec, which is available as a design in our shop!

A lot of your artwork features lemurs and other animals. What inspires you about lemurs?

Those animals have a wonderful diversity and evolutionary story. I find them absolutely fascinating, and lemurs are also the cutest!

I love to watch their natural behaviour and learn from it. It’s a real shame that all the different species of lemurs are so little highlighted when they are some of the world’s most threatened species. I’m very sensitive about the fauna and flora. I love to showcase them through my art to raise awareness about lemur conservation.

We absolutely love your illustration for this year’s World Lemur Festival logo. What drew you to this image?

I find that picture lovely and original because of how we discovered an interesting behaviour of the sifakas.

We have still a lot to learn about lemurs. Art is good way to show this kind of information and teach the public about it.

Participate in Inktober for the World Lemur Festival with Mr. Lemur’s Inktober challenge!

Where is your favorite place to see lemurs?

I haven’t had the chance to travel to Madagascar yet. I had planned to do an eco-volunteering project with Helpsimus, but it was canceled due to the pandemic. I’m sure looking forward to going there to see lemurs in their natural land!

Do you have any advice about getting started in illustration or drawing animals?

Observations! It’s important to understand what you are drawing, just by watching animals in a zoo and making live sketches, or taking photos and using them as references for training and inspiration. Everything comes with practice.

The illustration in this year’s logo is based on a photo you took in Madagascar. What was happening in that photo?

The photo that the illustration is based on is one I took during my dissertation research at Bezà Mahafaly Special Reserve, Madagascar in 2017. In the photo you can see three adult sifakas (plus a baby on the sifaka in the center!) hugging the base of a valiandro tree during the intense heat of the late dry season (mid-September).

There was actually a fourth animal on the other side of the tree, so they formed a complete ring around the base of the tree!

Sifakas really do hug trees! This instance was the first time I had seen a group of sifakas hugging the same tree. It was so visually captivating and got my research team and I thinking about why the animals might be doing this.

We ended up conducting a study on this behavior the following year in which we collected data on ambient temperature and the surface temperature of the ground and at various points on the hugging tree. We found that tree hugging occurred only when it was really hot out and that the temperature at the base of the tree is often several degrees cooler than locations on the ground and farther up the tree.

So, sifakas are actually engaging in tree hugging to cool off when it’s super hot out, not just because they love trees!

Sifakas are highly adapted to life in the trees and are more vulnerable to predation when they are sitting on the ground; this is probably why tree hugging behavior is not seen very often. It’s likely that the sifakas are only willing to risk resting on the ground when it’s very hot out and they don’t have other options to cool their bodies down. 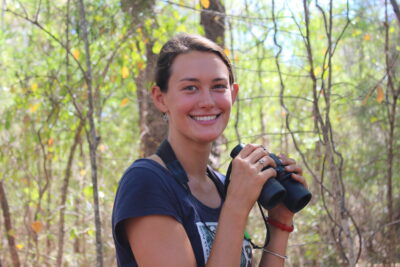 The tree-hugging photo is so hopeful and emphasizes how everything in the forest is connected.

What are your hopes for lemurs and for Madagascar?

My hope is that conservation can start working towards management plans that allow both humans and lemurs to coexist in Madagascar’s remaining forests, rather than excluding humans from forests in order to protect lemurs.

The forest is a critical resource for many people in Madagascar, as it is for all lemur species. Bezà, where I conducted my research, is a community-based conservation area that allows regulated human use of the forest. My research showed that this multiple-use approach is actually working quite well to protect sifakas and gave me a lot of hope for human-lemur coexistence. I hope that Bezà’s approach can be used as a model for conservation elsewhere.

Chloe Chen-Kraus studies lemur behavioral ecology and conservation. She spent over 17 months at Bezà Mahafaly Special Reserve in southwest Madagascar as part of her PhD research at Yale University. Specifically she studied sifaka lemurs and how they are impacted by human activities.

Her research has informed conservation efforts that aim to improve lemur habitat connectivity and that promote human-lemur coexistence. Chloe is now teaching Natural History and Ecology at Maine Coast Semester School at Chewonki and is excited to be inspiring the next generation of natural scientists, critical thinkers, and stewards of this Earth.

A New Partnership with Mongabay Kids for Lemur Outreach and Learning
Double Your Impact for Lemurs this Holiday Season!