Home » A Day in Andasibe 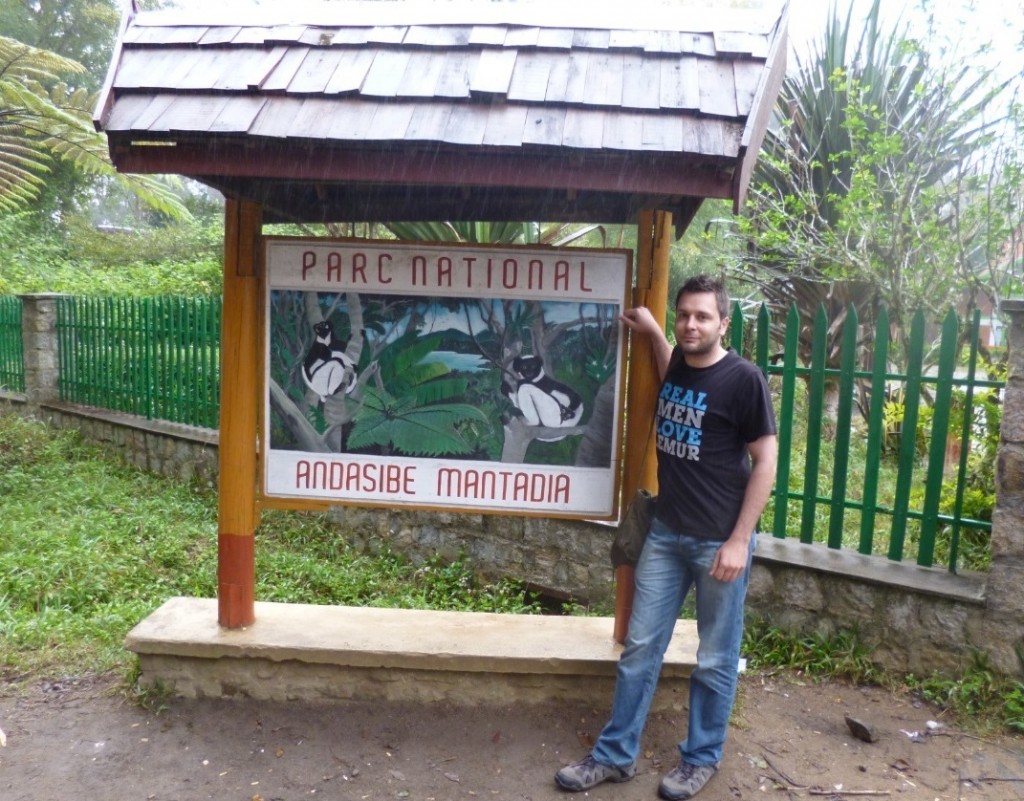 The Gateway to Wilderness

Only for the Intrepid

For the uninitiated Madagascar can be daunting. It’s large, busy, potentially dangerous, the roads are terrible and travelling the island solo requires both bravery and guile. Being on a tight time schedule (and being a wimp), my recent visit to the land of lemurs was with an organised tour group. This began and ended in Antananarivo with three national parks along the way and the promise of plenty of prosimians.

Andasibe is the park most accessible from the capital, located 200 miles and a few hours to the northeast. The drive is hilly and scenic, winding its way through undulating farmland and small settlements.

What struck me most about Madagascar’s landscape was the number of rice paddies. Seemingly everywhere there is terraced, watered land to provide the residents’ three meals a day. This has had a huge effect on the environment and fauna, and makes the stunning backdrops somewhat hollow. To make matters worse, with no trees, roads and fertile soil are washed away. More trees are then removed. 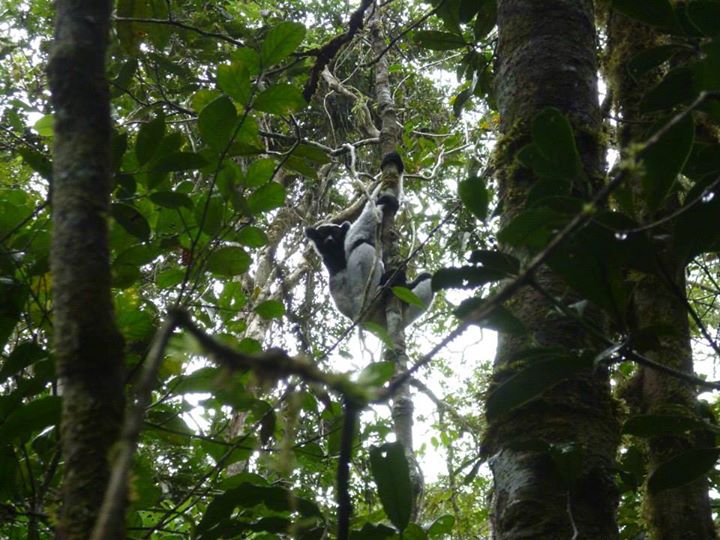 At Andasibe it is possible to hire a guide for a night walk along the road which lines the forest. My first wild lemur was therefore a Goodman’s mouse lemur, found only in that area of Mada. The experience was a little strange, as part of a big crowd it’s not how you expect to encounter your first lemur, flashes and talking surrounding you. The tears would have to wait.

That wasn’t long. Like a kid at Christmas, I was awake at 4am and at 5:45 I was outside, watching the sun rise over the forest and surveilling the distance for any movement.

At about 6:20 I was rewarded by some tiny silhouettes jumping between trees before vanishing. Again it’s a far cry from your fantasies but I’d done it – I’d seen lemurs in the wild, presumably common browns, and stood smiling and fighting tears. 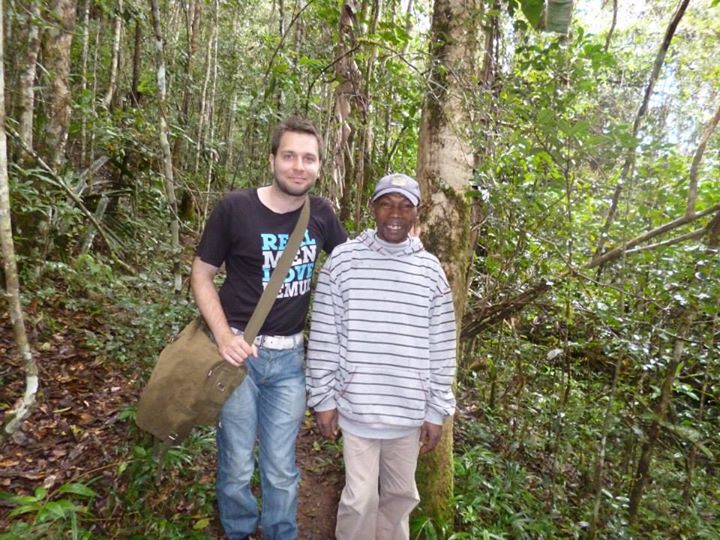 Our guide, whose income relies on Andasibe being busy

Wanting to maximise my lemur time within the park itself, I arranged for a guide to accompany a small group of us. The mission? Indris. Indris are surprisingly easy to find here, they are habituated and don’t mind secondary forest. There is also their unique, haunting singing which echoes through the area. Strangely, the last cyclones have caused them to delay their hymns from dawn to post-nine o’clock. Why this is, no one knows.

The Stars of the Forest

After two hours, multiple hills, many leeches and someone falling over twice, my guide received word that some were back by our guesthouse.

The area was already busy with fellow tourists but here in front of me were two real live indris, eating leaves care free and looking bemusedly back at us humans. Again I struggled to contain my emotions. A caterpillar falling from a tree and burning my skin brought me to my senses; that kept me itching for a week! 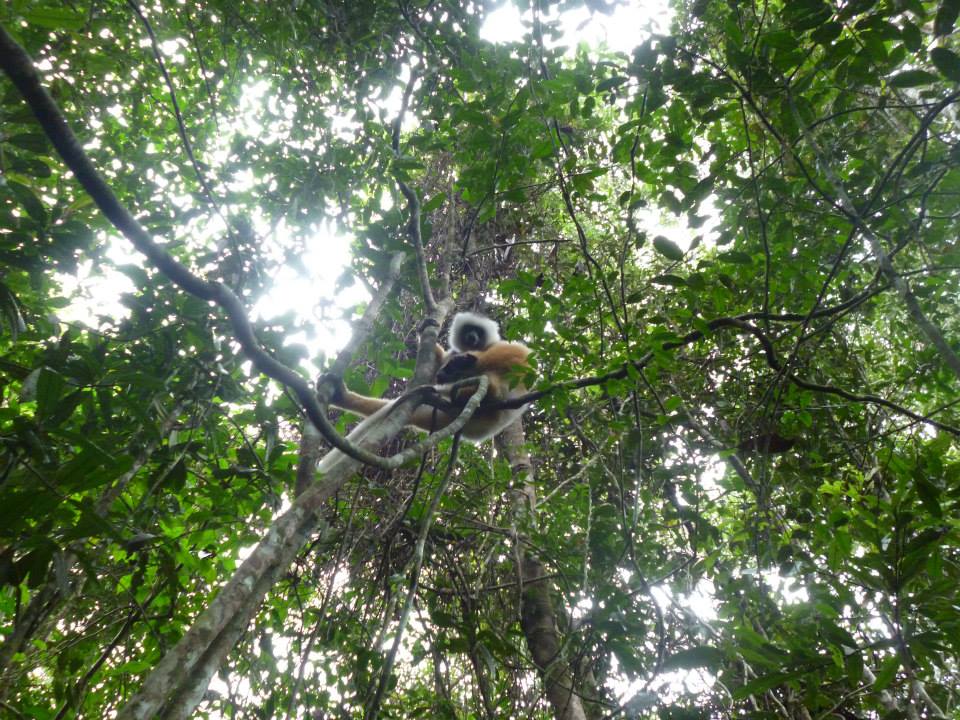 Just hanging out – the diademed sifaka

The next order was diademed sifakas. These are also critically endangered and are not found in zoos. We discovered a family of about six specimens, very close to the forest floor and staring at us without a worry in the world. They happily posed for photos for five minutes before darting off to find more food. This time no tissues were needed.

We were fortunate to find another indri pair by lunchtime, complete with two week old baby. I only saw a leg but to have witnessed such a special and endangered infant is a huge privilege. These individuals were also content to munch foliage before us, taking the occasional great leap between trunks then coming back into sight. When they don’t want to be seen though, they are impossible to follow.

Not so Common Brown Lemurs

The afternoon was more subdued. Having spent time with red-bellied lemurs at Howletts, I was keen to see wild ones. Like our three boys, wild ones are shy and not particularly active. It was therefore left to common browns to fill the gap. 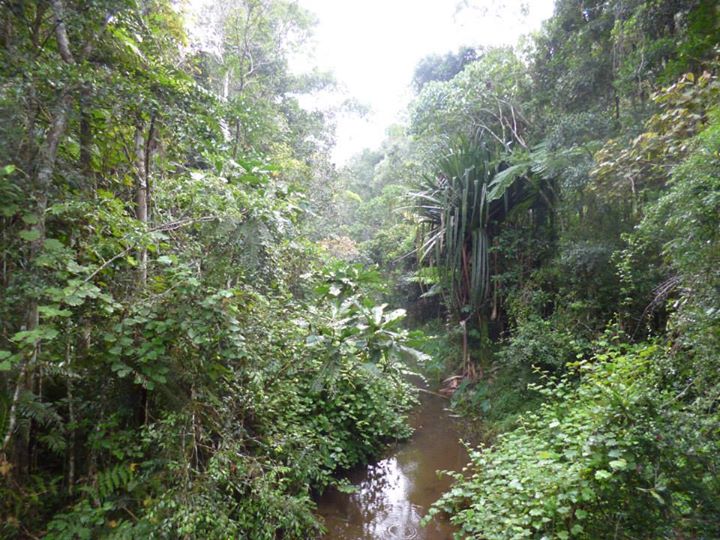 This is honestly not taken from Google Images!

Our initial meeting with brown lemurs was with a sleepy, quiet set near the park entrance. We later found a large, travelling group who would not stop grunting, perhaps because we were present? It’s similar to black lemurs in that it is guttural and short, but sometimes ends on a high note like a red-bellied. This bunch though, were eager to keep moving and so ghosted into the forest before long.

We returned to our guesthouse drained yet contented. A long walk in rainforest is gruelling, I’ve no idea how people do it for weeks on end, and even less so those who track nocturnal primates. However, I still had the energy to hire a guide for another night walk. I had hoped to spot eastern woolly lemurs, but I was pleased to spend time with extra Goodmans’. Mouse lemurs are an under-appreciated part of the lemur world, and I include myself in that.

Christmas was over then. I had been very lucky with my gifts from the forest, all presents which will last a lifetime and made extra fulfilling by the hard work required. Thankfully I wouldn’t have to wait another year as I had Ranomafana calling…