The main objective of Man and the Environment’s Net Positive Impact program is to ensure long-term forest and lemur conservation — and biodiversity conservation in general — through the involvement of local communities in management programs and economic activities in favor of the environment.

Net Positive Impact is a program of the Non-Governmental Organization Man and the Environment, a French organization that works in East and Northwest Madagascar. 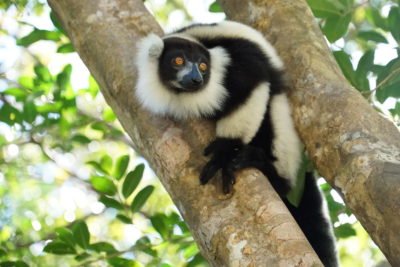 Varecia Variegata from the Vohimana forest. 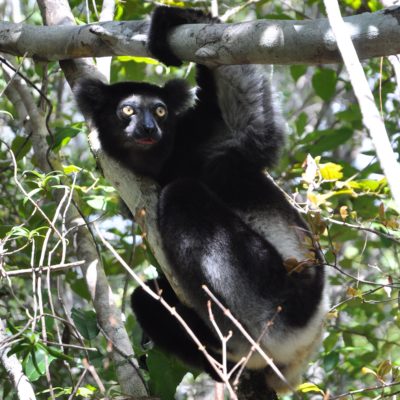 Indri Indri from the Vohimana forest

The Tsaramandroso community forest in the buffer zone of the Ankarafantsika National Park:

The Ambalakalanoro forest in the north-west coast:

How does Net Positive Impact work for lemur conservation?

As lemurs cannot survive when their natural habitat is in danger, Net Positive Impact works for habitat preservation and environmental conservation in the Vohimana, in the Tsaramandroso and the Ambalakalanoro forests by developing environmental programs. Our main actions are to make these sites “protected areas” to ensure their survival. We also monitor species registration, study their long-term acclimatization and take actions to promote their development in the zone, like reforestation and agro-forestry.

An infrastructure to develop ecotourism has been constructed in the Vohimana Forest, in order to raise awareness of locals and visitors about the site’s biodiversity. Visitors are encouraged to participate in monitoring species.

The main objective is protecting the forest and wildlife by giving local populations lasting sources of income based on a management plan ensuring sustainable agriculture and conservation areas.

Net Positive Impact believes that no sustainable and lasting wildlife-saving orientated project can be achieved if local communities remain impoverished, as practices endangering forests and wildlife are the ones that often make locals survive.

The Vohimana protected area project started in 2002 with the signature of an agreement transferring the management responsibility of the forest from the government to the NGO Man and the Environment for a renewable period of 25 years. The first step was to define the management plan, design the area for conservation and sustainable development purposes, and organize income generating activities for local communities and social improvement. 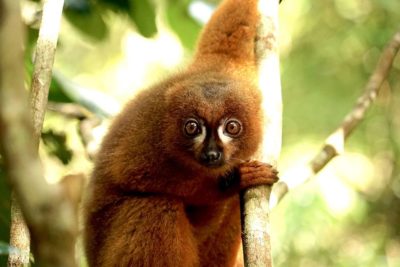 Eulemur Rubriventer from the Vohimana forest

In the 2000’s, the Vohimana forest almost disappeared because of fires and burn-and-slash agriculture. To preserve this fragile ecosystem, the lemurs and other species living in it, the first capital step was to secure the forest.

2. Ecotourism as a conservation tool.

The objective is to raise awareness about environment protection and to create a sustainable income source for the locals working on the project. Man and the Environment constructed an eco-shelter to welcome tourists and to secure the forest. In 2017, the infrastructure had been partly destructed by a cyclone.

The objective is to support environment-friendly agriculture to prevent slash-and-burn farming or other practices jeopardizing biodiversity. Net positive Impact started a program of ginger cultivation with 120 villagers around the forest. Likewise, a distillery of essential oil has been constructed and is managed by local workers. Ginger seeds have been given to selected farmers but follow-up training should be carried out. Malagasy firms will buy the production.

The incomes generated from visitors of the ecotourism infrastructure will be redistributed to the school and the health center the NGO Man and the Environment constructed in a village near Vohimana, Ambavaniasy. The objective is double. First, to contribute to improve the living conditions of the locals, enhance education access and reduce risks of disease. Second, the forest can be seen as a potential source of living conditions improvement, encouraging villagers to protect it and thus the species living in it.

This projects aims to secure the Ambalakalanoro forest for long term conservation, in order to prevent possible fires or cuts in the forest and allow tourists to visit the site. The Ambalakalanoro forest is now the last shelter of those animals that managed to escape the recurrent fires. Its size is reduced to only 65 hectares, and therefore can be compared more to a private park with exceptional fauna and flora than to a state protected area. The Ambalakalanoro project was launched in 2010. 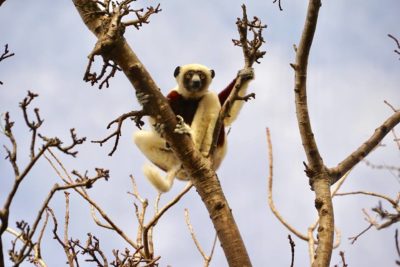 The forest is located near Ankarafantsika national park. It is under great pressure of deforestation, jeopardizing the wildlife it shelters. The goal of the project is to secure the forest and its wildlife by supporting local communities in preventing slash-and-burn farming or other practices jeopardizing biodiversity. The project was launched in 2015. To do so, Net Positive Impact started a program of a sustainable collection of Saro leaves on site and other aromatic plants. Net Positive Impact also constructed a distillery of essential oils, managed by local farmers. 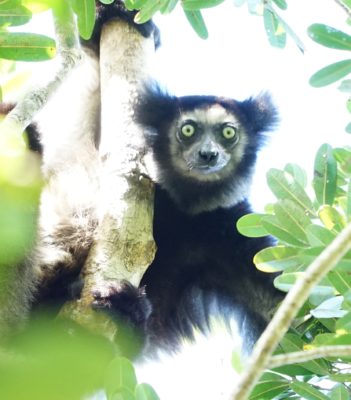 For the Vohimana project, the local partners are different local associations, Mercie Vohimana, Manarapenitra, Zanatany, each specialized in a field.

For the Ambalakalanoro project, the local partner is the local district.

For the Tsaramandroso project, the local partners are VOI Mamelonarivo and CIRAD.

Donations Are Needed to Support These Projects in Madagascar

Donations are need to secure the Vohimana forest for long-term conservation.

Transforming the 25 years management plan agreement into a purchase of a 99-year lease of the forest.
Estimated budget to buy the 560 hectares of  forest: 250 000€

Recently, the government of Madagascar decided to sell the forest and the neighboring lands. The sale will happen at the expense of the local populations, despite their involvement in developing agro-forestry cultures respecting a long-term forest conservation plan. As a result, the risk is that individuals or companies will be able to legally destroy the forest or adopt environmentally destructive activities. Moreover, farmers will lose their lands and those who until now were using sustainable agriculture methods protecting the forest will have no choice but to go back to environment-damaging methods, as slash-and-burn culture. A solution is that Man and the Environment finances the purchase of the forest by obtaining a long-term lease of 99-year between the NGO and the State of Madagascar. Thus, the NGO would ensure the protection of the forest and its species.

Equipment of the forest patrols.
Estimated budget: 5 000€
The patrols cannot be efficient in preventing fires and wood trafficking if the proper equipment is lacking.

Employing one biologist and logistician on the field to organize the stays of biologists and the lemurs, frogs, rare plants (and other species) follow-up.
Estimated budget: 10 000€
Net positive Impact organizes lemur population monitoring. The objective is to achieve a serious database on the evolution of these populations and raise awareness of visitors, who are invited to participate in the data collection.

Securing the land for sustainable agroforestry farming and ensuring training of local farmers.
Estimated budget: 100 000€
The neighboring lands will be sold by the Malagasy government. The risk is that lands may be bought by individuals or firms that do not respect the environment and endanger the wildlife. The NGO can buy the lands and redistribute them to local farmers which agreed to an environment-friendly agriculture.

Ecotourism as a conservation tool.

Continue production and training for essential oils.
Estimated budget: 15 000€
A first production unit of essential oil has been provided and local community trained to process local plants for which sustainable markets have been found. Leaves from the forest are being sustainably used for production. Two new stills will be added to increase the production of essential oil, following demand.

Social support.
Estimated budget: 3000€
For the health center to become functional, a mid-wife and a nurse need to be employed full-time and health supplies need to be bought, before the added value from the essential oil production allows paying these costs.

Education.
Estimated budget: 20 000€
The villagers approved the primary school the NGO constructed, and now ask for four classrooms for kids from 11 to 15 years old.

Training in Management and Accounting.
Estimated budget: 3000€
The local association is functioning but needs to be trained in management and accounting.

Training in Medicinal Plants.
Estimated budget: 8 000€
Promotion of a proper use of safe and efficient local medicinal plants. 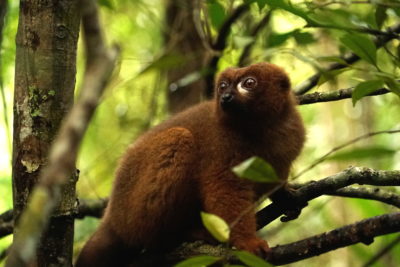 Secure Forest.
Estimated budget: 70 000€
It is important to secure the forest and its surroundings to ensure conservation by obtaining a long-term lease of 99 years for the forest itself.

Research.
Estimated budget: 10 000€
Organize studies of fauna, its long-term acclimatization and understand the actions necessary to promote its development in the zone.

Raise Awareness.
Estimated budget: 5 000€
Communicate about the site in order to draw national and international interest to conservation.

Promote Ecotourism.
Estimated budget: 5 000€
Promote hotel facilities development on the surrounding areas, companies that will have long-term interest to preserve an appealing environment for patrons and to involve local population in environmental protection.

Man and the Environment

Man and the Environment – donate