Home » On the Ground in Madagascar with Sylviane Volampeno

You are here: Home › Blog › On the Ground in Madagascar with Sylviane Volampeno
By Kim Reuter on May 20, 2015 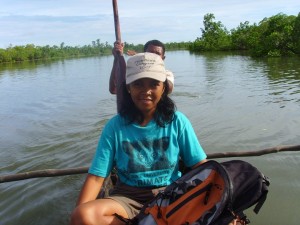 Dr. Sylviane Volampeno joins us this week as our featured researcher! Sylviane studied Animal Biology at the University of Antananarivo (Madagascar) and later received her PhD in Zoology from the University of KwaZulu-Natal (South Africa). Sylviane’s work has focused on the blue-eyed black lemur in the Sahamalaza-Iles Radama National Park and she is currently a part-time lecturer in the Department of Animal Biology at the University of Antananarivo. In addition, she is the President and Founder of Mikajy Natiora, a Madagascar-based conservation association. 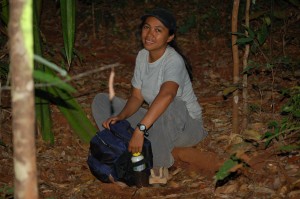 I was an undergraduate student at the University of Antananarivo when I first saw lemurs in the wild during a field trip to the Analamazaotra Special Reserve. During this trip, I learned that lemurs, which are endemic to Madagascar, play an important role in forest regeneration and in ecosystem preservation. Given the beauty and ecological importance of lemurs, I became motivated to undertake work related to their conservation.

Also, as a Malagasy person, I would like to contribute to the conservation of the nation’s precious heritage: the lemurs.

What projects are you currently working on that relate to lemurs or environmental conservation?

My team and I are currently working on the conservation of the blue-eyed black lemur species. Specifically, we are doing a population survey of this lemur species at its main habitat site, the Sahamalaza-Iles Radama National Park, as well as  building a research camp and conducting an education and outreach program to the villages surrounding the park. Our goal is to implement long-term conservation programming to protect this critically endangered lemur. However, our work is not limited to one species of lemur and we are already thinking of working to save other endangered species in the future. 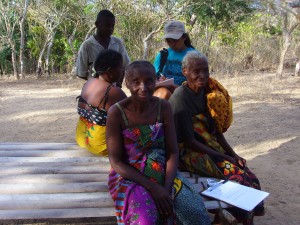 Sylviane conducting questionnaires and surveys in a village in Madagascar.

Why did you decide to start your own organization (Mikajy Natiora) and how do you think you’ll make a difference?

After studying lemurs for many years, I understand the needs of the species as well as potential conservation solutions for its wildlife and habitat. Also, lemurs are our country’s richness and I would like to show that Malagasy people like me have a responsibility to save lemurs from extinction.

Therefore, I decided to establish my own organization because I wanted to contribute to the conservation efforts and protection of the endemic biodiversity of Madagascar. My approach is to combine ecological research with participation and involvement of the local community; I think that my approach can make a difference and can advance the conservation of Madagascar’s biodiversity…especially lemurs.

It is very difficult to conduct lemur work during the rainy season which also coincides with the cyclone season. This is especially true when you are in a remote area that is difficult to access. You need to be strong physically and mentally to succeed, but since I’m very passionate about my work, I find that my days in the field are full of courage and motivation. 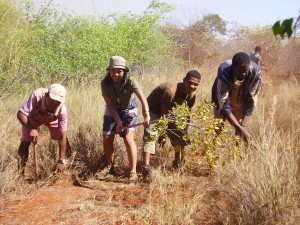 Sylviane working with a team to create a fire break in rural Madagascar.

The most memorable moment was in 2006. I had just started my PhD work on lemurs and there was bush fire at my study site which was damaging part of the forest. Although I was with local guides, it was very difficult for us to extinguish the fire so I rushed to ask the local villagers for help. However, the closest village was about a 2 hour walk from the forest…but the local guide and I ran to the village in one hour. We eventually managed to extinguish the fire five days later.

The main threat facing lemurs in my area is from habitat destruction due to the human activities. However, I believe that if you involve and inspire the local communities who live in the areas surrounding the lemurs’ forest habitats that you can start to alleviate this threat. For example, you can implement education and outreach initiatives, as well as alternative livelihoods programs. 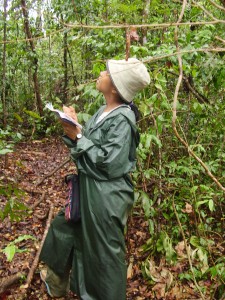 In ten years, I hope to have significantly improved the local community’s awareness for the need to conserve the blue-eyed black lemur. I also aim to train young, Malagasy biologist to become better lemur conservationists.

Even the smallest action by people across the world can help save lemurs. For example, visiting the forest habitats where lemurs still exist, by making a donation (whether in-kind or monetary), or by providing training to increase capacity building of the local biologists.

If every Malagasy biologist takes action and becomes involved in a lemur conservation project – together with the government and NGOs – we can make a difference and save the lemurs.

Zookeeper’s Notebook: Spotlight on Black Lemurs
On the Ground in Madagascar with Valerie Torti