You are here: Home › Blog › Zoboomafoo’s Sifaka Cousins in Madagascar
By Carmen Liberatore on May 28, 2015

In Madagascar, sunlight filters gently through the leaves of baobab trees and wild vanilla, creating a dappled pattern of light on the forest floor. Bugs crawl among the roots and fallen leaves, exotic birds sing, and overhead, calls of “shif-auk!” bounce between the trees. 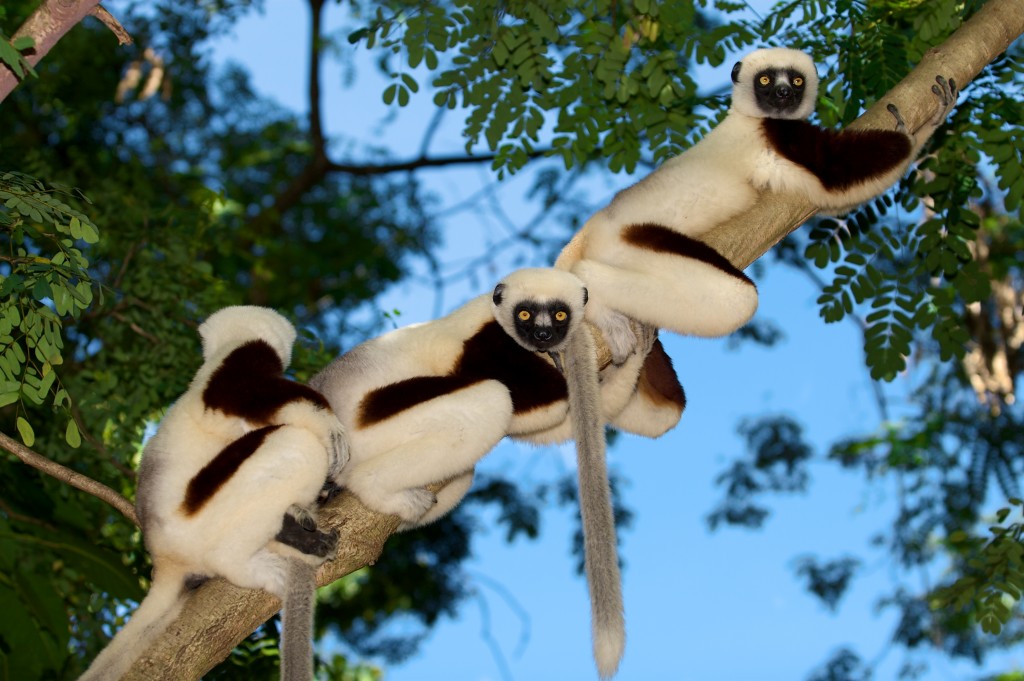 A family of coquerel’s sifakas chillin’ in the treetops. Photo courtesy of Planet Madagascar.

High above the ground, a family of coquerel’s sifaka lives peacefully. They groom one another, browse for leaves, bark, flowers, and fruit, and softly “talk” to each other during the day, and sleep upright in the topmost branches at night.

Coquerel’s sifaka families typically consist of around three to ten members, who keep in constant communication with one another with distinctive calls of “shif-auk” (which is where the name ‘sifaka’ comes from). And you thought your family was clingy.

In addition to their cool name and sweet mode of transportation, sifakas are one of few primate species to have a matriarchal society.

Females, not males, are the ones to choose a mate, keep a family together, and maintain territory boundaries—Woohoo! Girl power!!

A family’s territory is usually about 10-22 acres, but studies have shown that territories of separate families can overlap without much conflict. Like myself, lemurs prefer passive avoidance. If I ignore the problem, it might go away.

Where in Madagascar do Coquerel’s Sifakas live?

The average summer temperature of the coquerel’s sifaka’s native deciduous forests is a balmy 86o F (30o C), and they typically receive about 80 inches of rain (200 cm) in the northwest, where the Ankarafantsika Nature Reserve is located and where nearly all remaining coquerel’s sifakas live. (View organizations who work to protect Ankarafantsika.) The Nature Reserve contains more species of endemic flora than many areas of Madagascar, including my personal favorite: the giant, bulbous Grandidier’s baobab (aka “bottle tree”). These and other trees in the forests drop their leaves in the rainy winter season (October-May), which creates a rich layer of leaf debris on the forest floor. 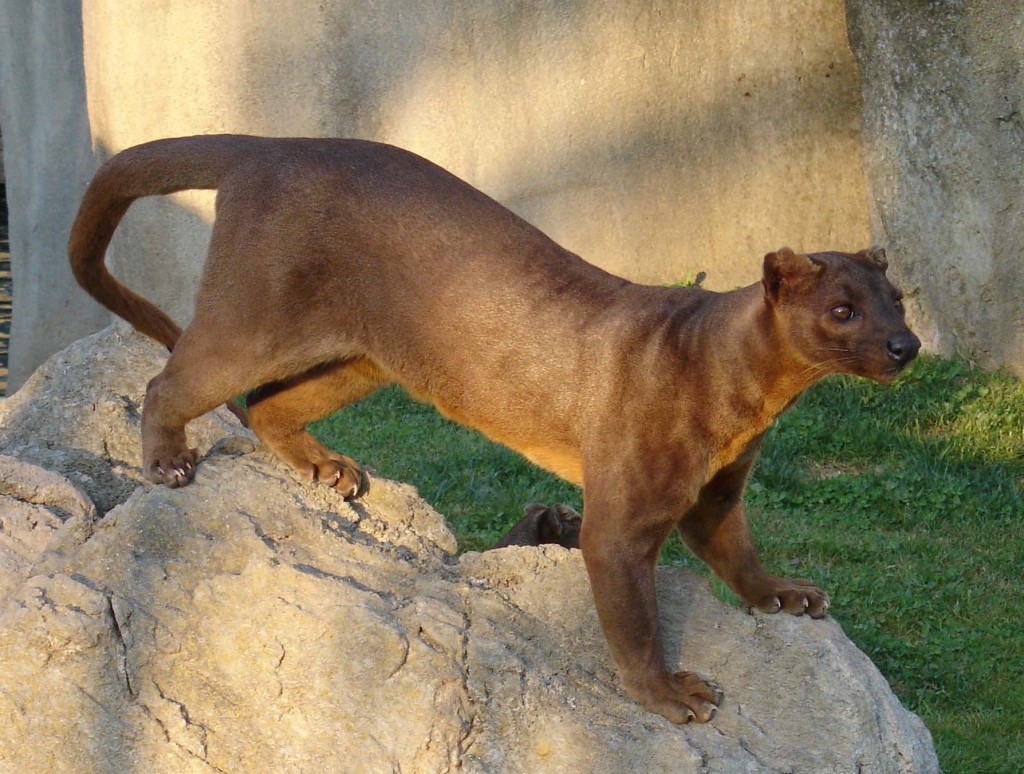 A fossa, #fierce. Photo from Wikipedia.

However, suitable territories are becoming harder and harder to come by, as deforestation and hunting in Madagascar continues despite the efforts of NGOs and local laws (More about the issue here). As the sifaka’s natural habitat shrinks, they are forced to travel over more open spaces than they used to, which puts them at risk to be hunted, either by their natural predators (hawks, eagles, and fossas—a 30 pound wildcat-like mongoose cousin) or by humans.

Malagasy culture traditionally considered the hunting of most lemurs taboo, or fady, but the rapid globalization of the island has deteriorated this custom in some areas. The bushmeat trade in Madagascar has spiked since the lapse in law enforcement as a result of the coup in March of 2009, as well as the rapid rise in jobs at gold mines, which dramatically raised the demand for food in certain areas, including meat. Thus, lemurs are hunted, killed, and sold to local restaurants and homes as “luxury” bushmeat more than ever before (for a really excellent BBC article about the issue, here’s a link).

How many Coquerel’s Sifakas live in the wild?

As a result of these threats, coquerel’s sifakas are now rare in the wild. Since it is very difficult to track them, we don’t know exactly how many are left in Madagascar, but experts guess that there are about 10,000 coquerel’s sifakas in their native land, with an additional 60 living in captivity, mostly at the Duke Lemur Center in North Carolina, which has been the most successful at breeding them and boasts an ideal deciduous forest for the lemurs.

P.S. Putting together these posts require me to read a lot of super interesting articles, blogs, and studies. Here’s one article that really stood out to me because it’s so chock-full of interesting facts.

Carmen is a native Oregonian with a passion for the environment. She has worked on a number of environmental causes, including a successful local petition to ban Styrofoam food containers in her area. She is an avid traveler—most recently to Gulu, Uganda—and intends to pursue a career in environmental journalism, whether in print or documentary filmmaking. Growing up with Zoboomafoo gave her a love for animals and a drive to help them in any way possible. Mangatsika!