Home » On the Ground in Madagascar with Lisa Gould

You are here: Home › Blog › On the Ground in Madagascar with Lisa Gould
By Kim Reuter on June 3, 2015 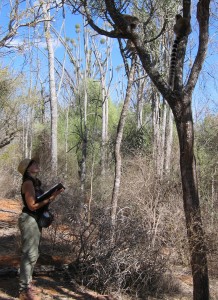 Lisa collecting data in Berenty in 2006. Photo is copyrighted by Lisa Gould.

Dr. Lisa Gould has been a professor of biological anthropology and primatology at the University of Victoria (Victoria, Canada) since 1998 and is a Board Member for Lemur Love, a non-profit working in Madagascar. In addition, she has been conducting research on ring-tailed lemurs since 1987  at the Berenty and Beza Mahafaly gallery forests (1987-2004), Berenty spiny forest (2006-07), Anja Reserve and Tsaranoro rocky outcrop forests (2009-2013), and at Sakaviro, Samisorany, Marody, Chameleon, Andranobe, Beanana, and Ikomby rocky outcrop forest fragments (2013).

Lisa received an undergraduate and master’s degrees in Anthropology from the University of Albert (Canada) and her PhD from Washington University in St. Louis (USA). More information about Lisa’s research can be found on her university faculty profile and she can be contacted via email at: lgould@uvic.ca

When did you first get interested in working in Madagascar and what motivated you to undertake this work?

I began studying ring-tailed lemurs (Lemur catta) in 1987, after a trip to Madagascar in 1984. Hardly anyone was studying lemurs at that time, because Madagascar had been closed to foreign researchers in the 1970s and early 80s. Lemurs have always been completely fascinating to me. 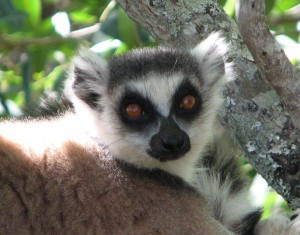 A male ring-tailed lemur! Photo is copyrighted by Lisa Gould.

What projects are you currently working on that relate to lemurs or environmental conservation?

Most recently, I and three of my graduate students conducted a number of projects on Lemur catta living in very small rocky outcrop forest fragments in south-central Madagascar.

My own work focused on feeding ecology and demography at these small sites, and research in 2013 involved censusing Lemur catta populations in 9 different fragments within a 250 km2 region where L. catta are/were found to determine population densities, juvenile recruitment, and measure food availability both within the fragments and in the matrix environments just outside of the fragments. We also looked at distance to the nearest fragment (potential for male dispersal) and degree of forest disturbance.

The goal with this work is to predict which populations have a good chance of persisting in the fragments and which will likely go extinct.

Some of these fragments are now being protected by community-based conservation groups in the nearby villages, as villagers are now realizing that the immense amount of forest destruction in the south-central highlands has resulted in crop failures and loss of food security. Also, many groups in this region are seeing the great success of Anja Reserve, which started as a very small community-based conservation project in 1999, but has now grown to become an extremely popular and successful tourist site…these smaller groups now want to promote tourism in their little forest fragments too. 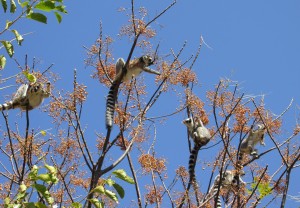 Because I’ve been going to Madagascar for over 30 years, the hardest thing for me is that forest destruction continues, constantly. Many forests where lemurs and other Malagasy wildlife lived are now gone forever. Outside of the National Parks, there is very little forest left.

What are the biggest threats facing lemurs – or the environment more generally – in your line of work, and what needs to be done to alleviate those threats?

As mentioned above, large-scale habitat destruction. And even though there are so many conservation associations that have been established in Madagascar and are working now to try and prevent it, forests still continue to be slashed and burned. Hunting for the illegal bushmeat and pet trade seems to be even more prevalent now compared with when I began to work in Madagascar in the 1980s. If the government of Madagascar will not institute harsh penalties for illegal lemur hunting, it will simply continue. Calling crimes illegal on paper – without enforcement – doesn’t mean much if crimes aren’t punished. 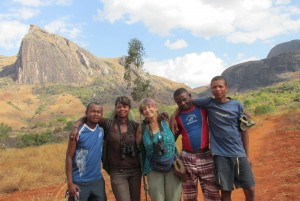 Lisa with her research team in 2013. Photo is copyrighted by Lisa Gould.

A positive aspect is seeing so many excellent conservation efforts being undertaken in situ. For example, Madagascar Biodiversity Partnership is doing fabulous and important conservation and education work with local people in the eastern rainforest at Kianjivato. Likewise, the SAVA project in Marojejy is employing a lot of programs to help with silky sifaka conservation and preservation of the forests in which these silky sifakas live, while the growth and success of Antanetiambo Nature Reserve in the north (established and run entirely by Malagasy conservationists and researchers) are great examples of impactful projects.

All of these projects incorporate local people and also offer interesting and fun outreach opportunities to local children. If Malagasy children learn that their forests and animals are found nowhere else on earth, and that they are extremely precious, perhaps some of them will carry that knowledge into the future. This greater sense of pride and responsibility will allow for a more successful forest and animal conservation in the future. 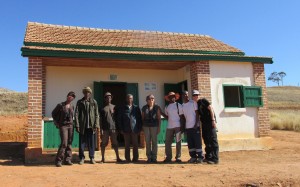 Lisa and her research team in 2013. Photo is copyrighted by Lisa Gould.

What is the funniest or most memorable thing that has happened to you while working on Madagascar-related programs?

I have many fun memories from 26 years of research. One of the best was in 1994, when I was in the field for my birthday, doing post-doc research. There were no other researchers at the site (Beza Mahafaly Reserve) at that time, and I was a bit sad, alone, and collecting data in the forest on my birthday. Suddenly, a juvenile Verreaux’s sifaka showed up and wanted to play. We actually played a kind of hide and seek for several minutes, with me hiding behind a log and then jumping up, which seemed to delight the sifaka. She then decided to play with the Lemur catta group that I was studying, which really upset them, so they charged at her, and again, she seemed to think that this was fun, so she jumped right into the middle of their group and all the ring-tailed lemurs flew into the air and scattered. 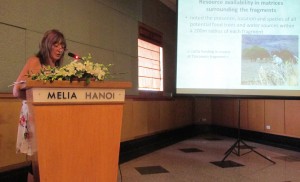 Lisa giving a presentation at the 2014 International Primatological Society meetings in Hanoi, Vietnam. Photo is copyrighted by Lisa Gould.

In ten years, what do you hope to have accomplished in terms of your work in lemur conservation and/or Madagascar?

In two years, I will retire from my position as Professor at University of Victoria, and I have finished my work in Madagascar. I continue to work with a number of organizations on lemur conservation ex-situ. For example, I am a member of the IUCN-SSP Primate Specialist Group for Madagascar, part of the International Primatological Society Conservation committee, and I am a board member for the NGO Lemur Love. We work directly with Reniala Lemur Rescue Center in southern Madagascar).

Ultimately, my hope is that with the new government some positive steps will be instituted so that lemur populations and species won’t go extinct in the near future, and so that the fabulous lemurs of Madagascar will be with us for a long time to come.