Home » On the Ground in Madagascar with Dr. Mark D. Scherz

You are here: Home › Blog › On the Ground in Madagascar with Dr. Mark D. Scherz
By Stephanie Canington on May 2, 2021 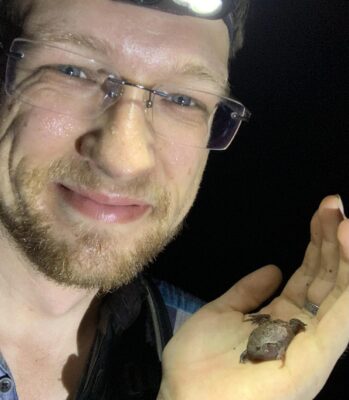 Dr. Mark D. Scherz is a Herpetologist and Evolutionary Biologist, currently with the Adaptive Genomics Group at the University of Potsdam (Germany). He has been an Associate Editor for the scientific journal “Herpetological Conservation and Biology”, and is a co-host of the podcast “SquaMates: A totally serious herpetology podcast.”

Can you describe your role as an evolutionary biologist? What animals do you study? 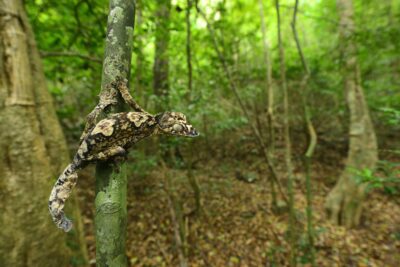 The giant leaf-tailed gecko, Uroplatus giganteus, is one of the largest gecko species in the world, and is restricted to northern Madagascar © Dr. Mark D. Scherz

That means I’m concerned with the description of new species. Among the reptiles and amphibians of Madagascar, a huge number of species have been found that are not yet formally named. I, therefore, work with a large network of fantastic colleagues to describe these species which helps us to fill in gaps in our understanding of the evolution of the herpetofauna of the island.

Where in Madagascar have you worked and where do you currently work? 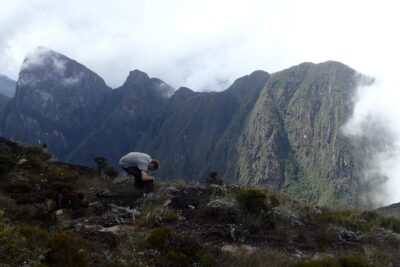 Herpetologists sometimes get to work in some of the world’s most beautiful places, and have to remind themselves to look up and take in the surroundings because the ‘fun stuff’ lives in the bushes and under the rocks. Here, Professor Miguel Vences turns over a rock in search of skinks near the summit of Marojejy, a mountain in northeastern Madagascar © Dr. Mark D. Scherz

I’ve had the great fortune to work across many different areas in Madagascar from the far southeast to the northern tip of the island; my work is directed wherever there are reptiles and amphibians to be found, which means more or less everywhere in Madagascar!

Some of my favourite trips have especially been in the northern areas of Madagascar.

For instance, Marojejy is an incredible place to work, with its beautiful steep slopes covered in lush vegetation. Incredibly, although expeditions have set out to catalogue the herpetological diversity of Marojejy on several occasions, every trip seems to yield some new species.

Visiting more remote forests, like those to the south of the Tsaratanana massif, for instance, is also exciting; the more remote, the greater the chance of finding species new to science. My trips to those areas have been very rewarding. But also grueling, because getting to remote areas by road and foot is no mean feat.

How does a scientist describe a new species? How many have you named? 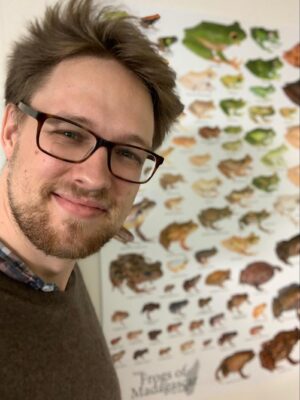 Mark beside his poster showing some of the frogs of Madagascar to scale, including many species he and his colleagues have described © Dr. Mark D. Scherz

The description of new species is the science called taxonomy.

In principle, it’s very easy to describe a new species. One must simply publish a paper or other written document (does not even need to be printed), in which one declares a new name, with a specimen designated as representative of that name, and states at least one character that supposedly differentiates that species from all others. This must comply with the formal rules of zoological nomenclature, but at a minimum is actually quite straightforward.

The description of new species is difficult and time-consuming.

In reality, of course, it is far from so simple. After we have done the hard work of finding the animals in the wild and depositing representative specimens in museums in Madagascar and in Europe, we must compare them to all previously existing species. If we are really sure that what we have is new, we must write it up and publish it in a form that can be used by others to identify the new species, including a ‘diagnosis’ in which we characterise the new taxon. That then goes through peer review (in the best cases) and is published, and therefore formally established.

Because of this lengthy process, there is often a huge lag, sometimes decades, between the discovery of new species and their description. For instance, in 2020 my colleagues and I described a new species of frog, Platypelis ranjomena, which had originally been identified in 1995!

I have been involved in the description of 81 species so far (since 2014), mostly frogs, but a number of lizards and one snake as well. This has only been possible because I work with some of the most incredible herpetological taxonomists of our time, especially Dr. Frank Glaw and Professor Miguel Vences. They were my doctoral advisors and literally wrote the book on these animals.

View a full list of the species that Mark has helped identify.

Lemurs are important seed dispersers. How do reptiles and amphibians contribute to the ecosystem? 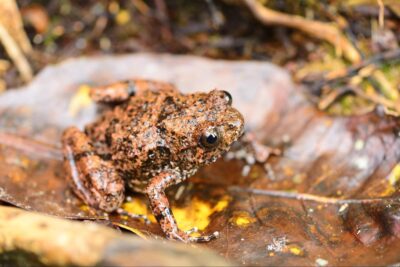 Reptiles and amphibians are so-called ‘mesopredators’.

Some snakes even eat lemurs!

On top of that, most frogs have aquatic herbivorous larvae (tadpoles). The broad generality of their ecological roles makes reptiles and amphibians critical to the entire ecosystem in Madagascar, and indeed every other ecosystem in which they occur.

What are the biggest threats facing reptiles and amphibians in Madagascar? 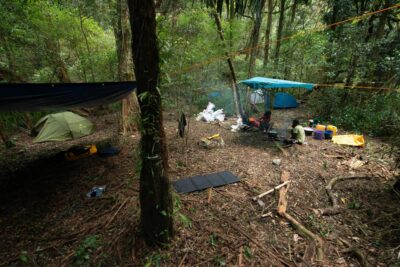 Life in the forest: a quick camp setup including shelters for cooking and eating, and tents for sleeping. Being far from electricity sources, solar panels and disposable batteries power these scientific expeditions. © Dr. Mark D. Scherz

Deforestation is undoubtedly the biggest threat facing all of Madagascar’s wildlife. Most species are exclusively found in forests, and only ~5% of Madagascar’s forests remain.

Fortunately, most large stretches of forest are now protected, but they nonetheless continue to decline. This has a lot to do with the economic situation in Madagascar. It is one of the poorest countries in the world. Much of the deforestation is driven by local people who harvest forest resources or deforest and plant crops for subsistence farming.

Reducing pressure on forests can only be achieved sustainably by changes in Madagascar’s economic situation.

Learn More about Dr. Mark Scherz and his Work

evolutionary biology, herpetofauna, herpetology, On the Ground in Madagascar, taxonomy