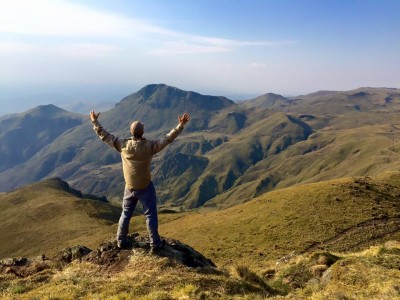 I caught up with Ash Dykes recently to celebrate his amazing feat of reaching the mid-way point of his Madagascar expedition. He’s trekked 800 miles from the southern most tip of Madagascar to the capital city of Antananarivo in the Central Highlands.

The first 800 miles have been quite the challenge. He has survived the deadliest strain of malaria, visited three organizations from the Lemur Conservation Network, summitted five of Madagascar’s highest peaks, and had a ton of crazy adventures.

Below are some highlights from our recent chat as well as a past conservation in Tsarasoa, and videos that Ash shot during his expedition.

On forest fires and the destruction of the land:

So much of the land has been burnt down and turned into paddy fields, or burnt so that new grass grows through for the zebu to eat. The last time I was here in Tsarasoa, there was a forest I’m looking at now, and half of it’s been burnt down, but last time I came, it was completely fine.

I was watching three fires on three different hills the night before last, big flames. The locals believe that if you burn, the smoke turns to clouds, and you get rain that way. Sometimes when they burn, it does start raining soon after, so they believe that is how rain is created, from the smoke. They’ve been told this generation after generation. 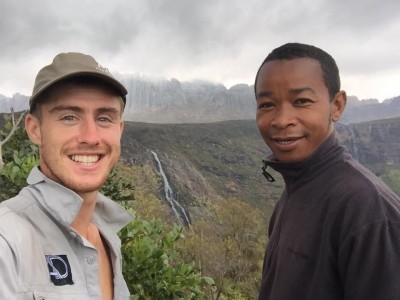 I was in Tsarasoa for five days with malaria. I even paraglided with malaria. I just didn’t know; I thought I had heat exhaustion. I was thinking, “I’ve had this before.” I thought I just need to drink water, drink cola for the sugar, and put salt on my rice, and I’ll get rid of it. One morning after a sleepless night, I was hallucinating. I realized I must have some sort of disease, so that morning I walked to catch a ride to the city. It was three hours, and we left straight away.

I arrived at a really nice hotel, and I literally just fell onto my bed. I was hallucinating vivid images. Three ladies came in, and one was the doctor.

My temperature was 41 degrees celcius, and my guide was thinking I only had a few hours left. The doctor took my blood test and said I had the worst strain of malaria and I need to get on medication now. For the next four days, I was in a lot of pain.

I started getting better and better. On day 7, I thought I’m good enough to leave now. My parents and family and friends wanted me back home, but I said not a chance. I’m continuing no matter what.

So I took my medication with me back to Tsarasoa, and the next day I continued, and that was the day I summited Pic Boby, which is the second highest mountain in Madagascar. After that, I felt good. I’ve been good ever since, but that was a painful experience.

On the visit to Ranomafana National Park and Centre ValBio: 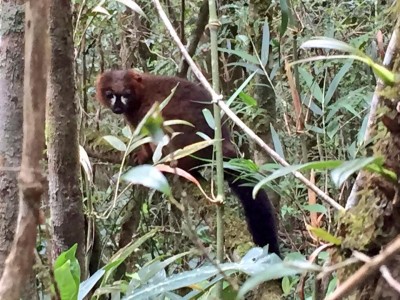 It was really cool, because for 60 days up until Ranomafana, I had just seen a couple of catta (ring-tailed) lemurs. And then to see 6 new species in one day of different lemurs, that was really cool. We saw fox species, different tree species. And there’s a tarantula in Madagascar that can actually kill you!

Then we went back to the jungle, and we came across two small huts that were built in the 1980s, and that was where Patricia Wright started researching. And now to look at the research station, it’s crazy how fast it has changed.

On local superstitions and being afraid of westerners:

On the next section on the way to Tana, the people were different there. They just ran away every time they saw me, they would sprint for their lives. My guide Joe had to walk about a quarter of a mile in front of us to get directions. We would walk up one hill, and we could see a village, with everyone out, the chickens and dogs, and a fire going. When we dropped down that hill, the village was completely empty, and everyone had run away. There was nothing but dogs and chickens to greet us. It was really difficult.

We managed to find one old guy who was used to it and wasn’t bothered. He said in the 1960s when the French roamed Madagascar, they had guns and would be rather brutal to the local Malagasy. So of course, some of these locals had never seen a westerner before, but had heard all these stories of an African with a frenchman, who had guns and weapons.

So they saw me and my guide Joe (who is African), and they didn’t waste any time running away. It was really weird. They truly believe that white people are really bad guys who are out to hurt you. And this was just five days walk from Tana, but when you get to Tana, everyone is educated and no one is phased by westerners and it’s just a different world. But they are deep in the mountains.

In other areas, it was nice to meet with locals and show them that we are nice people and not there to harm them.

On reaching the halfway point and heading north from Tana: 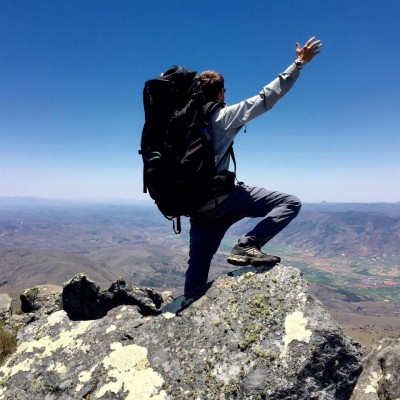 I have a different guide now for the rest of the trip. He’s really good, quite hardcore, a proper bushman and also really well educated. He runs all the big expeditions for Madamax here in Tana. We’re getting excited and trying to have him join me for the whole northern section.

It feels like it’s a different expedition now. It doesn’t feel like I’m continuing the same expedition, because the weather is changing, the terrain’s going to be completely different, and we’re going to be trekking slower I’m sure, because it’s going to be more jungle.

I’m looking forward to the jungle, especially up north where we have the 4 highest mountains, we could go 12 days without seeing any locals. So, I’ll have to make sure we have plenty of food for that section. It feels like I’m embarking on a new expedition and all of my excitement and enthusiasm has come back. We hope to see more wildlife as well.