Home » Studying lemurs goes beyond the love for them – It’s also about love for the whole forest.

You are here: Home › Blog › Studying lemurs goes beyond the love for them – It’s also about love for the whole forest.
By Corey Romberg on November 29, 2016

As a PhD student, Katie Grogan studied the genetic diversity of both captive and wild ring-tailed lemurs, trying to understand how genetic diversity influences the survival and reproduction of these amazing animals. Already in love with lemurs from her captive work at the Duke Lemur Center, the Indianapolis Zoo, and the Cincinnati Zoo, she journeyed to Madagascar to collect fecal samples for health assessments of wild lemurs. There, she spent six weeks camping at Beza Mahafaly surrounded by wild lemurs and fell head over heels in love with the island, people, and animals of Madagascar.

In collaboration with the Duke Lemur Center, she has spoken to groups of all ages about the importance of research to understand these unique primates and conservation efforts to protect them. Although currently a postdoctoral researcher at Emory University working on sparrow genetics, she hopes to return to lemur work in the future, and meanwhile keeps herself involved in lemur research through collaborations, attending conferences, and blogging about lemur science for the Lemur Conservation Network! 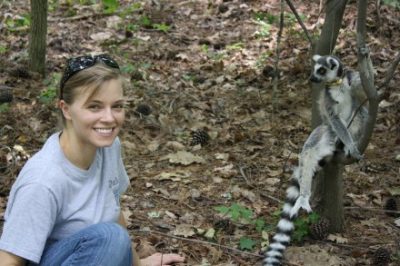 Katie Grogan with a Ring-Tailed Lemur

As a scientist and conservationist, I love best those moments when knowledge from many projects come together to tell us something critical to our understanding of the natural world, with far-reaching consequences for wildlife and conservation. One such study was published early this year in the science journal the Proceedings of the National Academy of Sciences by Sarah Federman and colleagues, and has such far reaching implications that it was covered in Smithsonian Magazine, IFLS, and the Huffington Post, to name a few.

The authors of this study aimed to understand how the extinction of lemur species, both past and future extinctions, might alter the forests of Madagascar. Madagascar is one of the top hotspots for biodiversity, especially for species found nowhere else in the world, like lemurs. Due, however, to a diverse array of threats, including deforestation, hunting, and the illegal pet trade, over 90% of lemurs are threatened with extinction.

In fact, since humans arrived on the island around 5,000 years ago, at least 17 species of lemur have gone extinct, some as large as a gorilla!

Aside from the fact that their loss is an incredible tragedy (just imagine running into Archaeoindris in the forest, a lemur over 5 ft tall at the shoulder!), lemurs also have a significant impact on forest structure and survival because they are a critical vehicle for seed dispersal for many plants.

Many Malagasy plants produce large seeds, which in other areas of the world are dispersed by being eaten and pooped out by fruit and seed eating animals, or frugivores. Madagascar, however, does not appear to have any animals capable of eating and subsequently dispersing seeds of such large size. The authors of this study hypothesized that extinct lemur species may have fulfilled the role of seed dispersal for these plants.

To estimate how these extinctions might impact the forests of Madagascar, the authors brought together data on lemur feeding behavior from both living and extinct lemur species and data on the size of seeds. Using these data, they generated a 3D model, or morphospace, comparing seed size to the ability of seed-eating lemurs to process and eat them. Confirming their hypothesis, the authors showed that extinct species of lemur such as Paleopropithecus, Archaeolemur, and Hadrylemur could have eaten the larger seeds which are currently “orphans” without a known dispersal mechanism.

So why does this matter?

These results have two important implications. The first deals with the survival and composition of Malagasy forests and plant life. Seed dispersal is important because it moves seedlings away from the parent plant, decreasing competition between the parent plant and its offspring, and increasing gene flow, or the movement of genetic diversity, throughout a region. Additionally, seed germination rates often increase after passage through the gut of a disperser. Without large bodied seed dispersers, like the extinct lemur species, these plants must rely on strong winds or small bodied animals to move their seeds, and both of these methods are likely to be much less reliable. If germination rates and dispersal distance for these plants decrease, the forests of Madagascar are likely to change inalterably. There will be fewer large-seeded plants, and they are likely to be clumped together rather than spread evenly throughout the forests. Increased competition for seedlings and decreased germination may eventually even lead to the extinction of these plants, altering the forests forever. For example, the tree with the largest seeds included in this study, and therefore most impacted by the lack of dispersal help, Borassus madagascariensis, is now listed by IUCN as Endangered with an estimated fewer than 100 adult trees left.

These results also highlight how important lemurs are to the island of Madagascar, as if we needed more reasons to conserve lemurs!

Several other endangered lemurs, like the ruffed lemurs, function as sole seed dispersers for other endemic Malagasy fauna. If these lemurs, which are classified as Critically Endangered, go extinct, even more plant species will struggle to survive as well. The extinction of a species is incredibly sad, but beyond that, has far-reaching implications for the survival of other species and the ecosystem as a whole.

Lemurs are an incredibly important part of Madagascar, and I’m so lucky to be able to study them!

Hiking with Ring-Tailed Lemurs at Anja Reserve
Goodbyes, greetings and a secret from Howletts