You are here: Home › Blog › Hiking with Ring-Tailed Lemurs at Anja Reserve
By Lynne Venart on November 8, 2016
I hope you enjoy this series of blog posts about my trip to Madagascar in August/September 2016, and it inspires you to travel to Madagascar and experience it yourself! Traveling south on the RN7, I stopped in Antsirabe, Ranomafana, Kianjavato, and Ambalavao. Visiting several Lemur Conservation Network members as well as community reserves, national parks, and artisan workshops, I gained insight from our members on the ground as well as local guides and villagers. View more posts in this series. 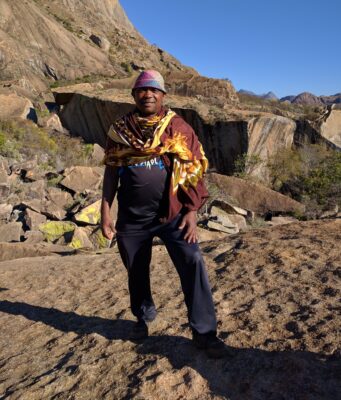 Meet Adrian, the founder of Anja Reserve and my guide for two days in the area.

After spending several days in Ranomafana and then Kianjavato, we head back west past Ranomafana National Park and then south to Ambalavao, a small city an hour south of Fianarantsoa (Madagacar’s second largest city) and just 7 kilometers north of Anja Reserve.

The Anja Reserve is a popular tourist stop on the RN7, and is viewed by many as Madgascar’s most successful community reserve. At lunch, my driver Zina introduces me to Adrian, who will be my guide for my next two days in this area.

Like most Malagasy in this area, he is from the Betsileo tribe, a people well known for their colorful blankets and hats. After growing up here, he left to study sustainable tourism, And then returned, determined to make a difference.

Adrian taught his community sustainable farming to increase rice yields and reduce their dependency on slash and burn. Once he got community buy-in, he started Anja Reserve and helped to develop the tourist infrastructure that is here today.

Anja is famous for its friendly ring-tailed lemurs. 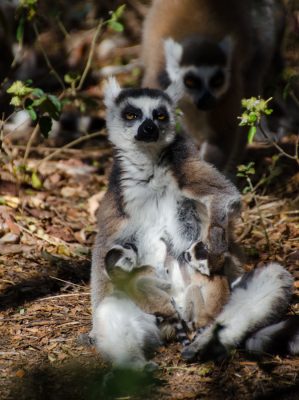 But don’t worry; though they have learned not to be afraid of humans, they live a completely wild existence. Adrian tells me there are up to 600 ring-tails in Anja, but scientists claim the population is closer to 300 or 400. At Anja, there are several troops of lemurs, each with about 30 members. Some of these troops run the territory closest to the trails and entrance, so these are the ones you’ll see with the least effort.

Many tourist buses stop at Anja for just an hour or two, but the park and surrounding area is large and varied enough for a few days if you have the time.

On my first day, Adrian and I do one of the short hikes (about two hours) with rock scrambles, scenic vistas, and tons of lemur photo ops. We are greeted by a group of ring-tails almost immediately. Two of them have babies; one mother even has tiny twins! Adrian estimates they must have been born within the last few days.

After the lemur photo shoot, we continue to hike and climb up a large rock face. 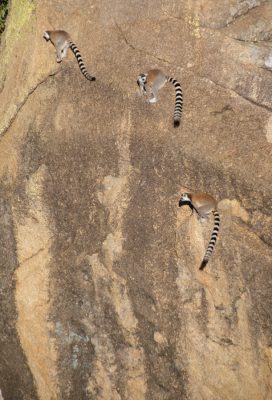 A system of ropes helps you ascend. At the top, we relax with the view of the surrounding mountains, valleys, rice farms and villages. A second troop of ringtails begins to traverse the small rock cliff in front of us. One after the other, they climb and leap sideways across the cliff face, jumping along the top of the cliff to join their friends in the food filled treetops beyond the rocks. With mountains and rice paddies in the background, and hopping ring-tailed lemurs in the foreground, this is such a quintessential Madagascar view!

A third group is leaping and eating its way through another patch of trees on the opposite side of us. I can’t see them too well, but to witness that there are at least three groups of healthy ring-tailed lemurs in this desert forest fills my heart. 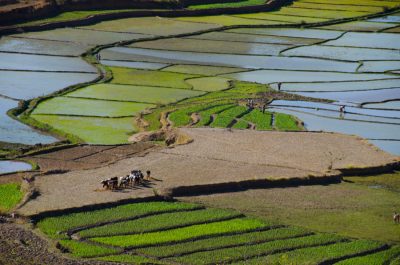 The rice farms surrounding Anja Reserve. You can see these farms and local villages right from high points in the reserve. It’s amazing to see people and lemurs living in such harmony here. 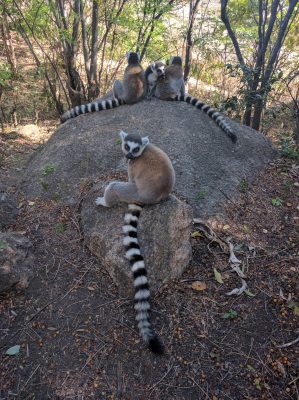 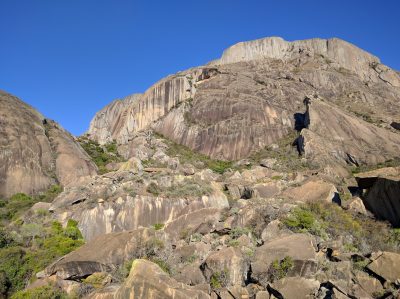 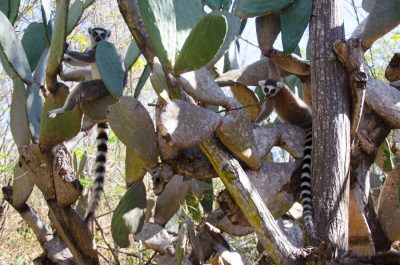 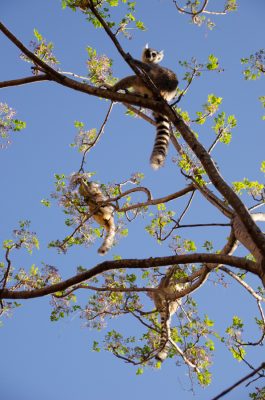 Spotting Sifakas and Ruffeds with Théo in Ranomafana
Studying lemurs goes beyond the love for them – It’s also about love for the whole forest.