You are here: Home › Blog › Reforestation in Kianjavato: MBP’s Conservation Successes
By Lynne Venart on January 17, 2017
I hope you enjoy this series of blog posts about my trip to Madagascar in August/September 2016, and it inspires you to travel to Madagascar and experience it yourself! Traveling south on the RN7, I stopped in Antsirabe, Ranomafana, Kianjavato, and Ambalavao. Visiting several Lemur Conservation Network members as well as community reserves, national parks, and artisan workshops, I gained insight from our members on the ground as well as local guides and villagers. View more posts in this series.

I visited Madagascar Biodiversity Partnership‘s (MBP) field station in Kianjavato last year to learn about their reforestation and conservation efforts in this region. Kianjavato is located about 1 ½ hours east of Ranomafana, and is home to at least 14,000 people and a dozen villages. The forest fragments surrounding Kianjavato are home to nine lemur species including the aye-aye, black and white ruffed lemur, and the greater bamboo lemur.

Reforestation to Connect the Forests of Kianjavato and Vatovavy 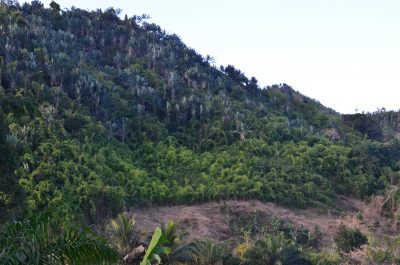 MBP established the Kianjavato Ahmanson Field Station in this area in 2009, which was followed by a reforestation “pilot” project run by Christophe, an MBP Malagasy graduate student working under the direction of the program’s founder, Dr. Edward E. Louis Jr. This pilot project led to the planting of more than 20,000 seedlings in the area from 2010-2011 in partnership with a team of reforestation assistants and community members.  Dr. Louis’ goal is to connect the forests of Kianjavato and Vatovavy with a forest corridor measuring approximately 7 kilometers long.

Forest corridors help lemurs and other animals travel between isolated populations and maintain healthy genetic diversity. When I visited in late August, the team had already planted ~850,000 trees. By the end of 2016, MBP had planted over 1 million trees in this area! In 2017, they aim to plant 500,000 trees in just one year!

How does the reforestation process work? 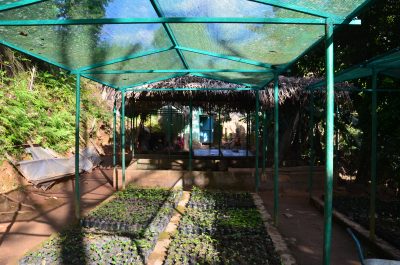 At the time of my visit, MBP had eight nurseries in this area to start the plants prior to grounding them in the forest, with plans to grow to 18 nurseries in the coming months. They collect seeds from up to 100 tree species native to the area, and plant about 8,000 seedlings a week into the growing corridor, with that number always increasing.

To prepare the young trees, the team mixes soil, sand, and compost to promote healthy growth. The compost is created by a careful mixture of plant leaves and other compostable materials like banana peels, and tended for four months before it’s ready for use.

When the seeds grow, they are moved to individual pots. Two tree species, acacia and albizia, grow the fastest and give shade. So, after about one month, these plants grow to ~18 inches tall, and are strong enough to be planted in their permanent home in the new forest corridor. The native species take about three months to grow strong, so they are planted later and fill in the gaps when they are ready.

How does Madagascar Biodiversity Partnership involve the community in reforestation?

The MBP works very closely with the Kianjavato community, getting local buy-in, providing jobs and incentive items like backpacks and materials to kick start local business. The MBP also works with Conservation Fusion on a number of education programs for school children. 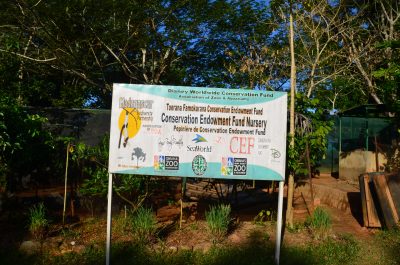 Before beginning a tree nursery, MBP first meets with the mpanjaka, or elder, and the president of the village. Once they have their buy-in, they meet with other elders and community members to get their support and show them how their reforestation plans will benefit the village. In Kianjavato, this process has gotten easier, because villages hear about how MBP has worked with other villages successfully and respectfully, providing them jobs and improving their livelihoods.

At the time of my visit, about 50 local people in Kianjavato had permanent jobs with MBP, and about 70 others helped with planting on a part time basis. Each new nursery brings more jobs to the area.

Prior to MBP’s presence in the area, locals had less stability, surviving by mining gemstones or harvesting and selling bananas. Now, they are respected, full time employees who find immense pride in their work and each tree they plant.

Conservation Credits Available to Everyone 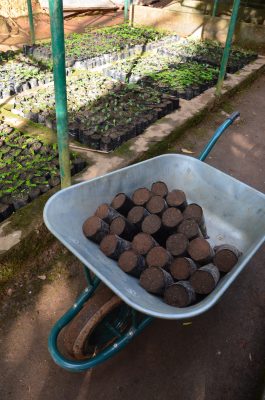 MBP’s Conservation Credit Rewards (CCR) program has been very successful because it directly impacts everyone in the community, not just the people with full time employment. This program encourages participation in planting events by rewarding individuals, families, and schools with a point-based system to purchase items like solar kits, rocket stoves, bicycles, and sewing machines.

Just a few days before my visit, over 100 people participated in a conservation credit planting day!

Prior to a CCR planting event, MBP holds a community meeting where people can apply to be a part of the event. Often the planting groups consist largely of women, who gain independence and the ability to purchase items for their home through the credit program.

Planning for Local Use of the Forest

Local landholders enter into a contract and agree not to conduct tavy (slash and burn agriculture) with the understanding that they can use the products, fruit and lumber, from the reforested areas. When reforestation is completed, the agreement states the land still belongs to the local people. 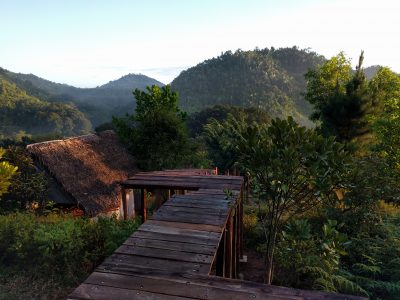 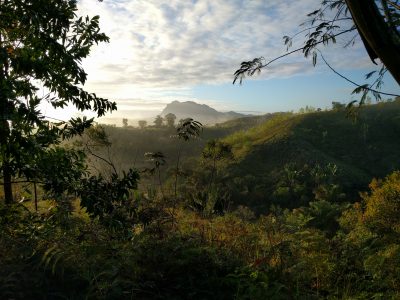