Home » My Week with Lemurs: Volunteering for Lemur Conservation

You are here: Home › Blog › My Week with Lemurs: Volunteering for Lemur Conservation
By Lucía Rodríguez on December 17, 2018
Our guest blogger today is Hazel Dudley, a volunteer at West Midlands Safari Park, who shares her fascinating experience working with ring-tailed lemurs.

Ring-tailed lemurs are one of Madagascar’s most iconic species, easily recognised by their distinctive black and white striped tails. With 3,500 ring-tailed lemurs living in zoos across the world, it could be fair to suggest that these lemurs have become a significant global image for conservation in Madagascar. 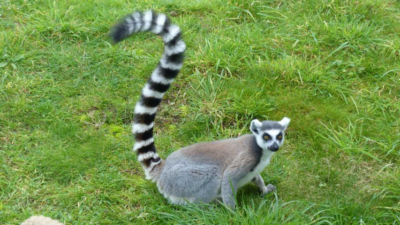 Earlier in the year, I was lucky enough to spend a week gaining work experience at a Safari park. The park’s troop of lemurs, including playful ring-tailed lemurs, white-fronted brown lemurs, & fluffy red-bellied lemurs were a particularly intriguing group of characters. Co-habiting in the UK’s largest lemur woods, these three species roamed and foraged freely.

Lemur family groups have females that are dominant over males. Lemurs develop very strong social bonds through grooming and form close knit families. However, they’re also known to fight with other families and even within their own family. Hierarchy quickly became obvious when Hiri, the dominant female of the ring-tailed lemurs, took a sudden disliking to Cafu (one of the troop’s younger members). Despite the fact that members of the troop had formed friendships with Cafu, they followed Hiri’s lead and showed more hostility towards Cafu, including vocalisations and even occasional physical attacks. However, I was impressed by the loyalty of Cafu’s mother Matilda. 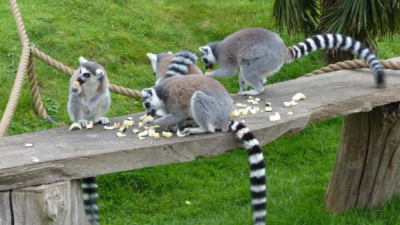 During the lemur’s favourite part of the day (feeding time- of course!) their zookeeper invited members of the public to watch and talk about lemurs in the wild and threats to their habitat. Of the 101 lemur species, 22 are critically endangered, 48 are endangered and 20 are vulnerable, according to the IUCN Red List of Threatened Species.

During these talks I realised the importance of protecting lemurs, a unique but vulnerable group of mammals, in their own habitat in Madagascar. 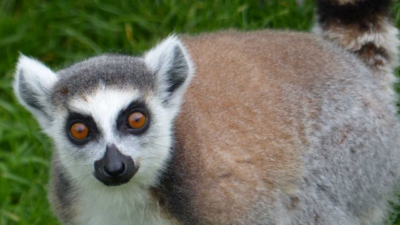 The primary threat facing lemurs is habitat loss due to deforestation. Tavy is a traditional Malagasy method of clearing forest, a type of slash and burn agriculture. The pressure to clear the forest comes from a rapidly growing human population who need more farmland to grow crops – particularly rice.

Many Malagasy are extremely poor; at least 92% of Madagascar’s population lives on less than US$2 a day. Furthermore, illegal logging can provide a source of income for Malagasy locals. Hardwood trees such as ebony, rosewood and palisander are particularly prized by a predominantly Chinese market to be turned into furniture.

One way that you can help lemur conservation is to avoid buying rosewood products as they fuel the “rosewood mafia” and illegal ‘pet’ trade.

By visiting zoos, you can help campaigns to raise awareness for global conservation threats whilst enjoying learning about lemurs.

Furthermore, you could adopt an individual of your favourite species of lemur—an adoption helps to save real animals in the wild.