Home » “If tomorrow…Madagascar!”, A Poem

You are here: Home › Blog › “If tomorrow…Madagascar!”, A Poem
By Lucía Rodríguez on November 7, 2022
Today’s guest blogger is Manitra R. Andriamialisoa, naturalist accompanying guide since 2001, and gifts us with a poem to raise awareness on deforestation in Madagascar.

If tomorrow, no more lemurs or any endemic animal species

Were around in those pockets of forests

Whether dry, or spiny, or rain or montane or littoral

Or primary or secondary or pristine or any pieces…

If tomorrow, no more trees

Whether shrubs or short or tall

Whether deciduous or ever green

No longer to be seen in those hills or lowlands…

If tomorrow, no more soil fertile

On those used-to-be granaries of Madagascar

In the highlands, eastern and western lowlands

Of the used-to-be green great island…

If tomorrow, no sounds of birds and Babakoto

Would no longer be heard nearby or from afar

Deep in the heart of the eastern and northeastern rainforests

To wake up nature enthusiasts from as early as dawn…

If tomorrow, no more tour guides would wake tourists up

Early in the morning to take them to nature reserves

To observe what the best Mother Nature could give

To enjoy their beauty and their chirps and various calls…

If tomorrow all colors would mean nothing

That all beings had to hide in manmade shells

If tomorrow was any worse than today

That Monday through Sunday would but a decay

Of talks about survival because of our own deed

That no one could find a way out to feed…

What is the story behind “If tomorrow… Madagascar!”?

Being from the countryside, Ambohimiadana, Manjakandriana, about 1h drive off the east of Antananarivo, the capital city of Madagascar,  I’ve always been fascinated by nature including wildlife and its natural habitat, that is forests, bushes, ponds, rivers, skies, etc.  I grew up in the middle of dense forests and would live close to water sources, ponds and rivers, lakes, and springs…That’s how interacted with wildlife and learned more about their habitat and their behavior…

Now when I go to my home village, I hardly recognize the vast fields close to nature where I would play dust with my friends. In fact, housing development projects have taken over the back-then-lush forests and green vegetation my grandparents were planting and taking care of! I wouldn’t see lemurs in the nearby forests as they would rather live in “Ala Gasy”, as we say in our country, that is in rainforests with native trees, and not in those dominated by Eucalyptus trees introduced from Australia. But about 15mn drive from our village further down to the East on National Road 2, that is from Ambatolaona, about 10kms from Manjakandriana, one can find Lesser Bamboo Lemurs, and Common Brown Lemurs as they have remnants of native forests there although it’s now disappearing due to forest fires and charcoal business and slash and burn agriculture. Witnessing all that is disheartening!

Twenty years later, when I’m celebrating my 20th guiding anniversary, I happened to get some compelling inspirations and quickly put together this humble poem from the deepest of my heart and soul. I do hope it raises awareness of the dire situation in which Mother Nature by and large and more particularly lemurs are finding themselves. Most importantly, I really hope quick actions will be taken to address such critical issues before it’s too late!

Writing poems in English about Madagascar and its unique biodiversity and nature conservation in Madagascar would be my sincerely humble contribution to preserving the best Madagascar has to offer, besides running strict wildlife tours focusing on Madagascar endemic animal species, particularly on rare lemurs for almost a decade. In fact, Madagascar Endemics & Resorts www.mermadagascar.com , my tour company, is celebrating its 10th anniversary in 2022. 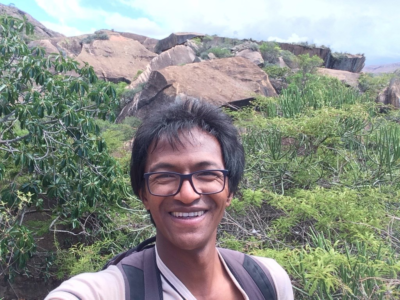