The 2022 World Lemur Festival and World Lemur Day logo features an illustration of the Red Bellied Lemur and the Rufous Mouse Lemur. We spoke to scientist Dr. Stacey Tecot to learn more about these two iconic lemur species.

Can you tell us about our two featured species? Where are they found, what do they eat, and are they endangered? 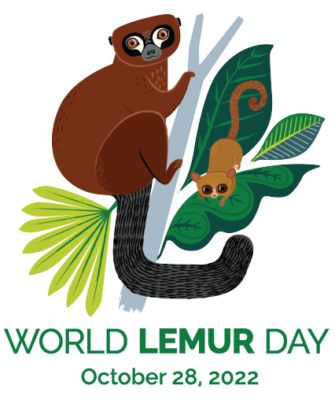 The red-bellied lemurs are a medium-sized lemur species best known for their chestnut brown coat colour, and the white patches under their eyes, giving a ‘tear drop’ effect. They are found in the strip of rainforest along the eastern escarpment of the island, running north-south. They are largely frugivorous, with anywhere from 57-99% of their diet being made up of fruit! They also eat a variety of other foods including, millipedes, leaves, nectar and bark.

Red-bellied lemurs also play a really important role as gardeners in the environment. They eat relatively large seeds and are known to be seed dispersers, meaning that they support trees and plants in spreading their seeds across the forest. It is thought that they act as pollinators as well.

Currently, the species is listed as vulnerable on the IUCN Red List, with a decreasing population trend. However, they are due for a reassessment soon based on some population changes we’ve seen just in the Ranomafana region. 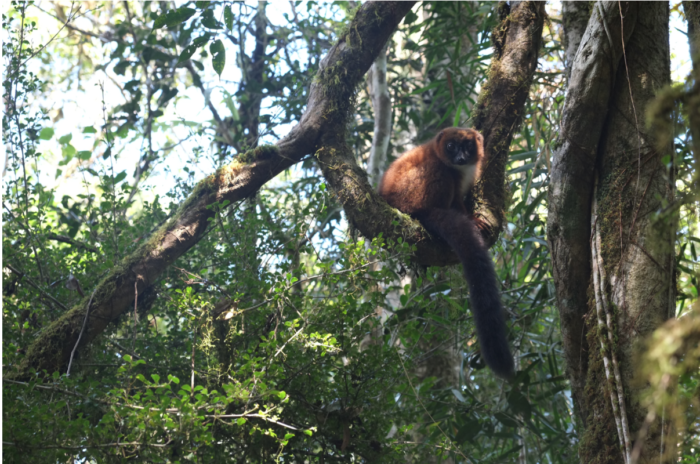 The rufous mouse lemurs are a small nocturnal (active at night) lemur species found in Ranomafana in the north to Andringitra in the south. They have a pretty limited range. Their range was thought to be larger but mouse lemurs in part of that range were recently determined to be another species. Their diet is thought to consist mainly of insects and fruits across the year.

Not much is known about this species of mouse lemur. Until 1977 the species was considered a sub-species of gray mouse lemur, until they were reclassified as their own species. What we do know is their diet consists of fruits, flowers and leaves, and they weigh on average 41g. That’s the same weight as 3 tablespoons of sugar! Also, they sleep in tree holes and leaf nests during the day and have been observed to use old bird nests. We also know that mating takes place in September and October, and 1-3 young are born following a two-month gestation period.

Similar to the red-bellied lemurs, the rufous mouse lemur is also listed as vulnerable by the IUCN with a decreasing population trend.

The red-bellied lemur and the rufous mouse lemur are found in Ranomafana National Park. You have been working in RNP for many years; when and how did your journey start?

With red-bellied lemurs it’s easier to identify unmarked individuals because they live in small groups of pair-bonded individuals, their offspring stay in relatively small territories, and it’s easy to distinguish sexes.

Now, I mainly conduct research in and around Ranomafana National Park. But, I have also worked in collaboration with Jean-Luc Raharison and Mitch Irwin on the Diademed sifaka in Tsinjoarivo, and with Rebecca Lewis on the Verreaux’s sifaka in Kirindy Mitea, a dry, deciduous spiny forest. 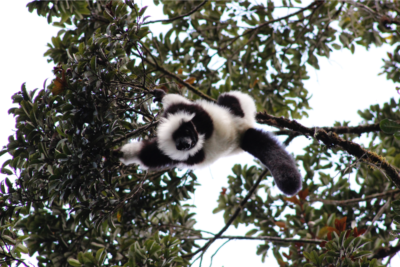 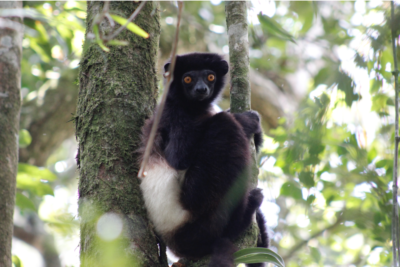 You mentioned working in collaboration with other scientists and researchers. How important is this to your work and what are you currently researching?

My work is entirely collaborative—every project involves multiple people with various expertise. I could not do it alone, and everyone plays a critical part. So, I have several projects at various stages of completion, all involving multiple collaborators with knowledge that extends beyond my own. 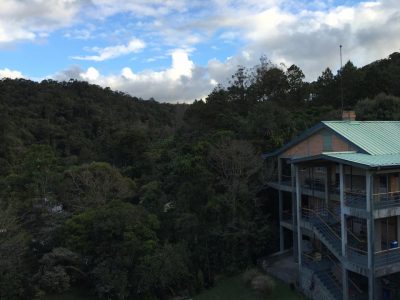 For several years I have been researching the mechanisms of paternal care in red-bellied lemurs so that we can understand what explains individual variation in cooperative parenting. I work with a team of research technicians at the Centre ValBio research station who have decades of expertise in lemur behavioral ecology and help collect behavioral and hormonal data year-round.

I’ve also been collaborating on a project with Becca Lewis investigating male bonding in Verreaux’s sifaka, a species with variable grouping patterns. We wanted to understand how males relate to one another when they live in social groups together, since they also live in single-male groups without opportunities to interact.

What conservation programs are you involved with in Ranomafana?

Education is a very important part of conservation in Madagascar as a whole. To address conservation concerns in Ranomafana, I’ve been involved in conservation education and storytelling projects that focus on the incredible diversity and importance of flora and fauna in Ranomafana National Park. 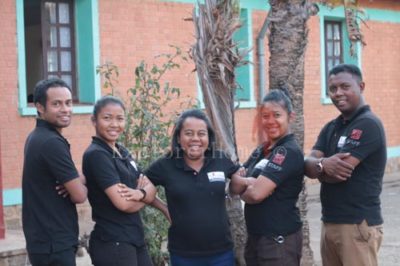 The staff of Explorer Home Madagascar

Due to COVID-19, I was unable to conduct research in Madagascar for a time, so I began a project that I could do remotely—the Ranomafana Ecological Storytelling project. This is a project I’ve been dreaming about for a long time. It highlights the expertise of local research technicians and tour guides through storytelling (in Malagasy with English subtitles).

We conducted interviews over zoom in front of a green screen, and we’re now moving along with the video editing phase in collaboration with ExplorerHome Mada, an NGO in Madagascar run by Tsiory Andrianavalona. This was another group effort that involved graduate students Clara Randimbiarimanana, Arielle Liu, and Katie King; Centre ValBio staff Dina Andrianoely and Andry Andriamiadanarivo; tour guide association president Rhodin Rafidimanandray; and artist Jessie Jordan. We hope to share the videos online at the end of the year, hold an event in Ranomafana, and broadcast the audio over the radio in Madagascar.

We have heard that you have been working on facial recognition software to identify individual lemurs. Can you tell us more about using this software and why it is so useful?

Yep, we have been! Rachel Jacobs and I had this crazy idea that we could identify individuals noninvasively through biometrics. This would allow multiple investigators to combine their data, because if we knew we were watching the same individuals, we could compile a nice, long-term dataset. It could also facilitate training in data collection, help us ensure we were watching who we thought we were watching, and possibly determine if ‘new’ individuals had previously dispersed from the population.

We had some additional grand plans for the system, which at this point I think are maybe a decade down the road. We were a little naive about how much of a task this would be! After thinking through multiple options, we landed on facial recognition. We worked with a team of computer scientists to develop a reliable algorithm that could identify individuals with over 99% accuracy, and over the past two or three years, we worked with Tech Core, a team at UArizona, to develop a usable interface. As of this summer we are able to use the system to identify individual red-bellied lemurs.

» Check out the LemurID program 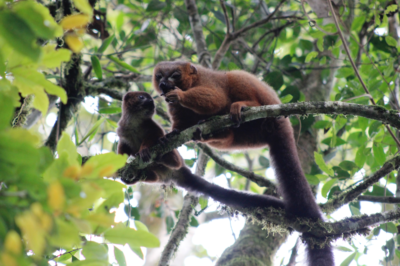 We have to ask, even though we think we know the answer, what is your favourite lemur species?

Hmm…I guess I’d have to say red-bellied lemurs because I know them the best.

They’re intriguing because they break a lot of the ‘lemur rules’ and they have several traits that aren’t fully understood.

For example, they are a lot like callitrichids (marmosets and tamarins): they have paternal and sibling care, hormonal changes that occur with infant care, and they twin relatively often, but there’s loads of variation in paternal care, and even the same male may invest a little or a lot from year to year. They are also cathemeral (active both during the day and night), but it doesn’t seem to be associated with a season or moonlight like in other species. And, while they’re highly seasonal breeders and usually all give birth within the same couple of weeks or so in a given population, we’ve recorded them having babies in 8 different months. So, there’s always something to try to figure out with them, which makes my work very exciting! 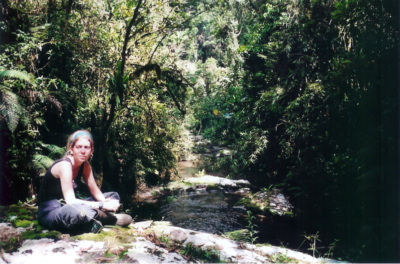 Stacey Tecot is a Biological Anthropologist and Director of the Laboratory for the Evolutionary Endocrinology of Primates in the School of Anthropology at the University of Arizona, in the U.S. She serves on the Madagascar section of the IUCN Species Survival Commission Primate Specialist Group, and the American Society of Primatologists’ Diversity, Equity, and Inclusion committee.

Stacey studies how individuals cope with ecological and social change using behavioural and physiological responses. Outside of the lab she mainly conducts field research in Ranomafana National Park, Madagascar, and her work occurs at the nexus of theory, health, and species conservation.

On the Ground in Madagascar, World Lemur Festival

Join the 2022 World Lemur Festival Drawing Challenge!
Over $100,000 of Donations Matched for Lemurs!